Jacob Roggeveen (1 February 1659 – 31 January 1729) was a Dutch explorer who was sent to find Terra Australis and Davis Land,[1] but instead found Easter Island (called so because he landed there on Easter Sunday). Jacob Roggeveen also found Bora Bora and Maupiti of the Society Islands, as well as Samoa. He planned the expedition along with his brother Jan Roggeveen, who stayed in the Netherlands.[2]

His father, Arend Roggeveen, was a mathematician with much knowledge of astronomy, geography, rhetorics, philosophy, and the theory of navigation as well. He occupied himself with study of the mythical Terra Australis, and even got a patent for an exploratory excursion, but it was to be his son who, at the age of 62, eventually equipped three ships and made the expedition.

He became notary of Middelburg (the capital of the province of Zeeland, where he was born). On 12 August 1690, he graduated as a doctor of the law at University of Harderwijk. He married Marija Margaerita Vincentius, but she died in October 1694. In 1706, he joined the Dutch East Indies Company (VOC), and between 1707 and 1714 as a Raadsheer van Justitie ("Council Lord of Justice") at Batavia, Dutch East Indies (now Jakarta). He married Anna Adriana Clement there, but she died soon afterward. In 1714, he returned to Middelburg by himself.

He became involved in religious controversies, supporting the liberal preacher Pontiaan van Hattem by publishing his leaflet De val van 's werelds afgod (The fall of the world's idol). The first part appeared in 1718 in Middelburg, and was subsequently confiscated by the city council and burned. Roggeveen fled from Middelburg to nearby Flushing. Thereafter he established himself in the small town of Arnemuiden, and published parts 2 and 3 of the series, again raising a controversy. 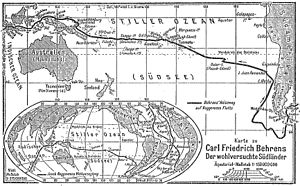 On 1 August 1721 he headed an expedition sponsored by the Dutch West India Company, the rivals of the VOC, to seek Terra Australis and to open a western trade route to the "Spice islands".[3] His fleet consisted of three ships, the Arend, the Thienhoven, and Afrikaansche Galey and had 223 men on crew. 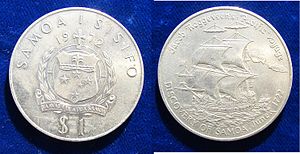 Roggeveen first sailed down to the Falkland Islands (which he renamed "Belgia Australis"), passed through the Strait of Le Maire, and continued south to beyond 60 degrees south to enter the Pacific Ocean. He made landfall near Valdivia, Chile. He visited the Juan Fernández Islands, where he spent 24 February to 17 March. The expedition later arrived at Easter Island (Rapa Nui) on Easter Sunday, 5 April 1722 [4] (whereupon he reported seeing 2,000-3,000 inhabitants). Roggeveen charted the location of six islands in the Tuamotu Archipelago, two islands in the Society Islands, and four islands in Samoa, losing his flagship, Afrikaansche Galey at Takapoto atoll.[3][5] At Makatea, he opened fire on a crowded beach in retaliation for a violent encounter with the inhabitants, and in return the Makateans ambushed a shore party, killing ten of his crewmen.[3] The remaining two vessels sailed past New Guinea to reach Batavia in 1722, where he was arrested for violating the monopoly of the VOC and had his ships confiscated. After a lengthy lawsuit in the Netherlands, the VOC was later forced to compensate him for his losses and to pay his crew.[3]