The Jacobite rising of 1715 (also referred to as the Fifteen or Lord Mar's Revolt), was the attempt by James Francis Edward Stuart (also called the Old Pretender) to regain the thrones of England, Ireland and Scotland for the exiled House of Stuart.

The Glorious Revolution of 1688–89 resulted in the Roman Catholic Stuart king, James II of England and VII of Scotland, fleeing to exile in France under the protection of Louis XIV. James' daughter and her husband, who was also James's nephew, ascended the British throne as joint sovereigns William and Mary. In 1690 Presbyterianism was established as the state religion of Scotland. The Act of Settlement 1701 settled the succession of the English throne on the Protestant House of Hanover. The Act of Union 1707 applied the Act of Settlement to Scotland. With the death of Queen Anne in 1714, the Elector of Hanover, George I, succeeded to the British throne. The accession of George I ushered in the Whig supremacy, with the Tories deprived of all political power. The new Whig regime sought to prosecute members of the 1710–1714 Tory ministry for financial irregularities, with Robert Harley being imprisoned in the Tower of London and Lord Bolingbroke fleeing to France before arrest. Bolingbroke became the Pretender's Secretary of State and accepted an earldom from him.

On 14 March 1715, the Pretender appealed to Pope Clement XI for help for a Jacobite rising: "It is not so much a devoted son, oppressed by the injustices of his enemies, as a persecuted Church threatened with destruction, which appeals for the protection and help of its worthy pontiff".[1] On 19 August Bolingbroke wrote to the Pretender: "Things are hastening to that point, that either you, Sir, at the head of the Tories, must save the Church and Constitution of England or both must be irretrievably lost for ever". The Pretender believed the Duke of Marlborough would join him when he landed in Scotland, writing to the Duke of Berwick on 23 August: "I think it is now more than ever Now or Never".[2] 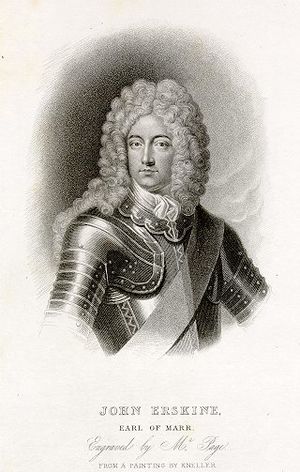 The Earl of Mar.

Despite receiving no commission from James to start the rising, the Earl of Mar sailed from London to Scotland and on 27 August at Braemar held the first council of war. On 6 September at Braemar Mar raised the standard of "James the 8th and 3rd", accompanied by 600 supporters.[3]

In response Parliament Habeas Corpus Suspension Act 1715 suspended habeas corpus and passed an Act that gave tenants who refused to support the Jacobites the land of their landlord if he was a Jacobite. Some of Mar's tenants travelled to Edinburgh to prove their loyalty and acquire title to their land.[4] 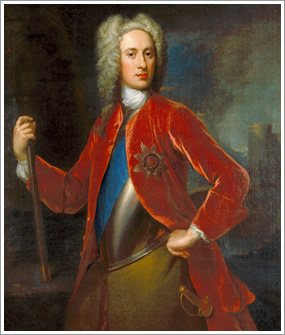 The Duke of Argyll.

In northern Scotland, the Jacobites were successful. They took Inverness, Gordon Castle, Aberdeen and further south, Dundee, although they were unable to capture Fort William.[5] In Edinburgh Castle were arms for up to 10,000 men and £100,000 paid to Scotland when she entered the Union with England. Lord Drummond, with 80 Jacobites, tried under the cover of night to take the Castle, although the Governor of the Castle learnt of their plans and successfully defended it.

By October, Mar's forces (nearly 20,000) had taken control of all Scotland above the Firth of Forth, apart from Stirling Castle. However Mar was indecisive and the capture of Perth and the move south by 2,000 men were probably decided by subordinates. Mar's indecisiveness gave the Hanoverian forces under the command of the Duke of Argyll time to increase their strength.[3]

On 22 October Mar received his commission from James appointing him commander of the Jacobite army. The Jacobite army outnumbered Argyll's forces by three-to-one and Mar decided to march on Stirling Castle. On 13 November at Sheriffmuir, the two forces joined in battle. The fighting was indecisive but nearing the end of the battle the Jacobites numbered 4,000 men, compared to Argyll's 1,000. Mar's army began to close in on Argyll's forces, who were poorly protected, but Mar did not order them to advance, possibly believing that he had won the battle already (Argyll had lost 660 men, three times as many as Mar). Mar then retreated to Perth. On the same day as the Battle of Sherrifmuir, Inverness surrendered to Hanoverian forces, and a smaller Jacobite force led by Mackintosh of Borlum was defeated at Preston.[3] 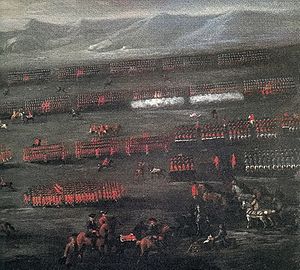 Amongst the leaders of a Jacobite conspiracy for a rising in western England were three peers and six MPs. On the night of 2 October the government arrested the leaders and on the following day easily obtained Parliament's permission for these arrests.[6] Included among those arrested was the head of the English Jacobites, Sir William Wyndham. The government sent reinforcements to Bristol, Southampton and Plymouth to ensure they did not fall into Jacobite hands.[7] Oxford was a city famous for its monarchist sentiment and was held by the government to be favourable to the Pretender, and so on 17 October General Pepper led the dragoons into the city and arrested some leading Jacobites without resistance.[8]

Nevertheless, there was an English rising in 1715. A diversionary rising had been planned in Northumberland to accompany the main rising in the West. Although the rising in the West was scuppered by prompt Government action, the one in Northumberland went ahead, on 6 October 1715. This English rising contained some prominent figures, including two peers of the realm, James Radclyffe, 3rd Earl of Derwentwater, and William Widdrington, 4th Baron Widdrington, and a future peer, Charles Radclyffe, later de jure 5th Earl of Derwentwater. Another future English peer, Edward Howard, later 9th Duke of Norfolk, joined the rising later in Lancashire, as did other prominent figures, including Robert Cotton, one of the leading gentlemen in Huntingdonshire.[9]

The English Jacobites joined with a force of Scottish Borderer Jacobites, led by William Gordon, 6th Viscount Kenmure, and this small army was joined by Mackintosh's contingent. They marched into England as far as Preston, where the Government forces caught up with them. This led to the Battle of Preston, on 12-14 November. The Jacobites actually won the first day of the battle, killing large numbers of Government forces. However, Government reinforcements arrived the next day and the Jacobites eventually surrendered.[10] 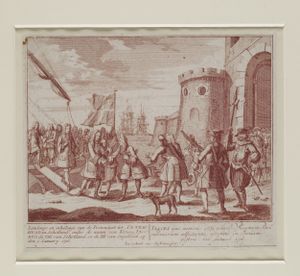 On 22 December the Pretender landed in Scotland at Peterhead,[11] but by the time he arrived at Perth on 9 January 1716, the Jacobite army numbered less than 5,000. In contrast, Argyll's forces had acquired heavy artillery and were advancing quickly. Mar decided to burn a number of villages in between Perth and Stirling, so as to deprive Argyll's army of supplies. On 30 January Mar led the Jacobite out of Perth and on 4 February the Pretender wrote a farewell letter to Scotland, sailing from Montrose the day after.[3]

Many Jacobites who were taken prisoner were tried for treason and sentenced to death. However, in July 1717, the Indemnity Act 1717 had the effect of pardoning all those who had taken part in the Rising, apart from the whole of the Clan Gregor, which was specifically excluded from the benefits of the Act. One of those who thus was not pardoned was Rob Roy MacGregor.[12]

James's son Charles Edward Stuart attempted to win the throne for his father in 1745 in another Jacobite rising but this failed. James died in 1766.