This article is about a specific 14th century French peasant uprising. For the general concept, see List of peasant revolts. 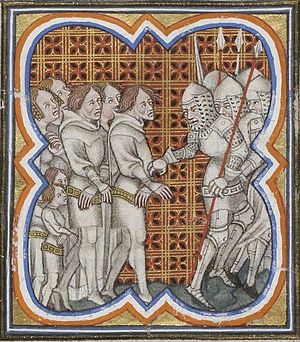 Prisoners in an illuminated manuscript by Jean Froissart

The Jacquerie was a popular revolt by peasants that took place in northern France in the early summer of 1358 during the Hundred Years' War.[1] The revolt was centered in the valley of the Oise north of Paris and was suppressed after a few weeks of violence. This rebellion became known as "the Jacquerie" because the nobles derided peasants as "Jacques" or "Jacques Bonhomme" for their padded surplice, called a "jacque".[2] The aristocratic chronicler Jean Froissart and his source, the chronicle of Jean le Bel, referred to the leader of the revolt as Jacque Bonhomme ("Jack Goodfellow"), though in fact the Jacquerie 'great captain' was named Guillaume Cale. The word jacquerie became a synonym of peasant uprisings in general in both English and French.[3]

After the capture of the French king (John II, Froissart's bon roi Jean "John the Good") by the English during the Battle of Poitiers in September 1356, power in France devolved fruitlessly among the Estates-General, King Charles II of Navarre and John's son, the Dauphin, later Charles V.

The Estates-General was too divided to provide effective government, however, and the disputes between the two rulers provoked disunity amongst the nobles. Consequently, the prestige of the French nobility had sunk to a new low. The century had begun poorly for the nobles at Courtrai (the "Battle of the Golden Spurs"), where they fled the field and left their infantry to be hacked to pieces; they had also given up their king at the Battle of Poitiers. To secure their rights, the French privileged classes — the nobility, the merchant elite, and the clergy — forced the peasantry to pay ever-increasing taxes (for example, the taille) and to repair their war-damaged properties under corvée — without compensation. The passage of a law that required the peasants to defend the châteaux that were emblems of their oppression was the immediate cause of the spontaneous uprising.[4] The law was particularly onerous as many commoners already blamed the nobility for the defeat at Poitiers. The chronicle of Jean de Venette articulates the perceived problems between the nobility and the peasants, yet some historians, such as Samuel K. Cohn, see the Jacquerie revolts as a reaction to a combination of short- and long-term effects dating from as early as the grain crisis and famine of 1315.

In addition, bands of English, Gascon, German, and Spanish routiers — unemployed mercenaries and bandits employed by the English during outbreaks of the Hundred Years' War — were left uncontrolled to loot, rape, and plunder the lands of northern France almost at will, with the Estates-General powerless to stop them. Many peasants questioned why they should work for an upper class that could not meet its implied obligation to provide protection for them.

This combination of problems set the stage for a brief series of bloody rebellions in northern France in 1358. The uprisings began in a village of St. Leu near the Oise river, where a group of peasants met in a cemetery after vespers to discuss their perception that the nobles had abandoned the King at Poitiers. "They shamed and despoiled the realm, and it would be a good thing to destroy them all."[2]

The account of the rising by the contemporary chronicler Jean le Bel includes a description of horrifying violence. According to him,

"peasants killed a knight, put him on a spit, and roasted him with his wife and children looking on. After ten or twelve of them raped the lady, they wished to force feed them the roasted flesh of their father and husband and made them then die by a miserable death".

Examples of violence on this scale by the French peasants are offered throughout the medieval sources, including accounts by Jean de Venette and Jean Froissart, an aristocrat who was particularly unsympathetic to the peasants. Among the chroniclers, the one sympathetic to their plight is Jean de Venette, sometimes known as the continuator of the chronicle of Guillaume de Nangis.[5]

The peasants involved in the rebellion seem to have lacked any real organization, instead rising up locally as an unstructured mass. Jean le Bel speculated that governors and tax collectors spread the word of rebellion from village to village to inspire the peasants to rebel against the nobility. When asked as to the cause of their discontent they apparently replied that they were just doing what they had witnessed others doing. Additionally it seems that the rebellion contained some idea that it was possible to rid the world of nobles. Froissart's account portrays the rebels as mindless savages bent on destruction, which they wrought on over 150 noble houses and castles, murdering the families in horrific ways. Outbreaks occurred in Rouen and Rheims, while Senlis and Montdidier were sacked by the peasant army. The bourgeoisie of Beauvais, Senlis, Paris, Amiens, and Meaux, sorely pressed by the court party, accepted the Jacquerie, and the urban underclass were sympathetic.[6] A small number of knights and squires provided leadership for some of the peasant bands, although in letters of pardon issued after the suppression of the rising, such individuals claimed that they were forced to do so.

The Jacquerie must be seen in the context of this period of internal instability. At a time of personal government, the absence of a charismatic king was detrimental to the still-feudal state. The Dauphin had to contend with roaming free companies of out-of-work mercenaries, the plotting of Charles the Bad, and the possibility of another English invasion. The Dauphin gained effective control of the realm only after the supposed surrender of the city of Paris under the high bourgeois Étienne Marcel, prevôt des marchands in July 1358. Marcel had joined Cale's rebellion somewhat inadvisedly, and when his wealthy supporters deserted his cause, it cost him the city and his life, in September. It is notable that churches were not generally the targets of peasant fury, except in certain regions. 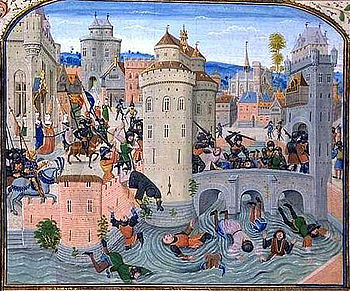 The revolt was suppressed by French nobles and gentry led by Charles the Bad of Navarre, cousin, brother-in-law, and mortal enemy of the Regent, whose throne he was attempting to usurp. His army and the peasant force opposed each other near Mello on 10 June 1358, when Guillaume Cale, the leader of the rebellion, was invited to truce talks by Charles. Foolishly, he went to the enemy camp, where he was seized by the French nobles, who considered that the conventions and standards of chivalry did not apply to him; he was tortured and decapitated.[2] His now leaderless army, claimed to be 20,000 strong in only Froissart's account, which was heavily influenced by the conventions of Romance, was ridden down by divisions of mounted knights. In the ensuing Battle of Mello and in a campaign of terror throughout the Beauvais region, knights, squires, men-at-arms and mercenaries roamed the countryside lynching uncounted peasants. Maurice Dommaget notes that the few hundred aristocratic victims of the Jacquerie were known as individuals to the chroniclers, who detailed the outrages practiced upon them.[7] An estimated 20,000 anonymous peasants were killed in the reprisals that followed.

The final events transpired at Meaux, where the impregnable citadel was crowded with knights and their ladies. On 9 June a band of some 800 armed commoners (not the 10,000 Jacques of Froissart's account) came out of Paris under the leadership of Etienne Marcel to support the rising. Like many of the peasants, they seem to have seen themselves as acting in the name of the imprisoned king. When the band from Paris appeared before Meaux they were taken in hospitably by the disaffected townspeople and fed. The fortress, somewhat apart from the town, remained unassailable. Two captain adventurers, returning from crusade against the pagans of Prussia, were at Châlons, Gaston Phebus, comte de Foix and his noble Gascon cousin the Captal de Buch. The approach of their well-armed lancers encouraged the besieged nobles in the fortress, and a general rout of the Parisian force ensued. The nobles then set fire to the suburb nearest the fortress, entrapping the burghers in the flames. The mayor of Meaux and other prominent men of the city were hanged. There was a pause, then the force led by the nobles and gentry plundered the city and churches and set fire to Meaux, which burned for two weeks. They then overran the countryside, burning cottages and barns and slaughtering all the peasants they could find.

The reprisals continued through July and August. There was a massacre at Reims, though it had remained steadfast in the Royal cause. Senlis defended itself. Knights of Hainault, Flanders, and Brabant joined in the carnage. Following the declaration of amnesty issued by the Regent on 10 August 1358, such heavy fines were assessed upon the regions that had supported the Jacquerie that a general flight of peasantry ensued.[8] Historian Barbara Tuchman says: "Like every insurrection of the century, it was smashed, as soon as the rulers recovered their nerve, by weight of steel, and the advantages of the man on horseback, and the psychological inferiority of the insurgents".[2]

The slanted but vivid account of Froissart can be balanced by the Regent's letters of amnesty, a document that comments more severely on the nobles' reaction than on the peasants' rising and omits the atrocities detailed by Froissant: "it represents the men of the open country assembling spontaneously in various localities, in order to deliberate on the means of resisting the English, and suddenly, as with a mutual agreement, turning fiercely on the nobles".[9]

The Jacquerie traumatized the aristocracy. In 1872 Louis Raymond de Vericour remarked to the Royal Historical Society, "To this very day the word 'Jacquerie' does not generally give rise to any other idea than that of a bloodthirsty, iniquitous, groundless revolt of a mass of savages. Whenever, on the Continent, any agitation takes place, however slight and legitimate it may be, among the humbler classes, innumerable voices, in higher, privileged, wealthy classes, proclaim that society is threatened with a Jacquerie".[10]