Jacques Pierre Brissot (15 January 1754 – 31 October 1793), who assumed the name of de Warville, was a leading member of the Girondist movement during the French Revolution. Some sources give his name as Jean Pierre Brissot.

Brissot was born at Chartres, where his father was an inn-keeper. He received an education, and entered the office of a lawyer at Paris. He married Félicité Dupont (1759–1818), who translated English works, including Oliver Goldsmith and Robert Dodsley. They lived in London, and had three children. His first works, Théorie des lois criminelles (1781) and Bibliothèque philosophique du législateur (1782), dealt with philosophy of law topics, and showed the deep influence of ethical precepts theoretised by Jean-Jacques Rousseau. In the preface of Théorie des lois criminelles, Brissot explains that he submitted an outline of the book to Voltaire and quotes his answer from 13 April 1778.[1]

Brissot became known as a writer, and was engaged on the Mercure de France, on the Courrier de l'Europe, and on other papers. Devoted to the cause of humanity, he proposed a plan for the collaboration of all European intellectuals, and started in London a paper, Journal du Lycée de Londres, which was to be the organ of their views. The plan was unsuccessful. Soon after his return to Paris Brissot was placed in the Bastille in 1784 on the charge of having published a pornographic pamphlet Passe-temps de Toinette against the queen.

He obtained his release after four months, and again devoted himself to pamphleteering, most notably his 1785 open letter to emperor Joseph II of Austria, Seconde lettre d'un défenseur du peuple a l'Empereur Joseph II, sur son règlement concernant, et principalement sur la révolte des Valaques, which supported the right of subjects to revolt against the misrule of a monarch, and was on account of this forced to retire for a time to London.[2] On this second visit he became acquainted with some of the leading abolitionists, and founded later in Paris an anti-slavery group Society of the Friends of the Blacks, of which he was president during 1790 and 1791. As an agent of this society he paid a visit to the United States in 1788, and subsequently published in 1791 his Nouveau Voyage dans les États-Unis de l'Amérique septentrionale (3 vols.). Brissot believed that American ideals could help improve French government. He was elected a Foreign Honorary Member of the American Academy of Arts and Sciences in 1789.[3] At one point he was interested in uprooting his family to America. Thomas Jefferson, ambassador in Paris at the time was familiar enough with him to note,"Warville is returned charmed with our country. He is going to carry his wife and children to settle there."[4] Alas for Brissot, such an emigration never happened. The rising ferment of revolution sucked him back into schemes for progress through political journalism that would consequently make him a household name.[4]

From the outbreak of the Revolution in 1789, Brissot became one of its most vocal supporters. He edited the Patriote français from 1789 to 1793, and took a prominent part in politics.[5] Famous for his speeches at the Jacobin Club, he was elected a member of the municipality of Paris, then of the Legislative Assembly, and later of the National Convention. Shortly thereafter, Brissot began to align himself with the more right-leaning Girondins who were often viewed as the 'war party.' The Girondins or Brissotins as they were often called, were a group of loosely affiliated individuals, many of whom came from Gironde, rather than an organized party with a clear ideology.

Following the arrest of King Louis XVI on charges of "high treason" and "crimes against the State", Brissot and the Girondins championed the idea of keeping him under arrest both as hostage and as a bargaining chip, while the Montagnards argued for his immediate execution. Brissot was against the decision to execute the King for two reasons. He believed that once Louis XVI was executed all of France’s foreign negotiating power would be lost and he feared a massive royalist rebellion.

At the time of the Declaration of Pillnitz, Brissot headed the Legislative Assembly: the declaration was from Austria and Prussia warning the people of France not to harm Louis XVI or they would "militarily intervene" in the politics of France. Threatened by the declaration, Brissot rallied the support of the Legislative Assembly which subsequently declared war on Austria on 20 April 1792. This decision was initially disastrous as the French armies were crushed during the first engagements, leading to a major increase in political tensions.

During the Legislative Assembly, Brissot's knowledge of foreign affairs enabled him as member of the diplomatic committee to control much of France's foreign policy during this time. Brissot was a key figure in the declaration of war against Leopold II, the Habsburg Monarchy, and that against the Kingdom of Great Britain on 1 February 1793. It was also Brissot who gave these wars the character of revolutionary propaganda.[6]

Of the Girondists, Vergniaud was the better orator, but Brissot was quick, eager, impetuous, and a man of wide knowledge. However, he was indecisive, and not qualified to struggle against the fierce energies roused by the events of the Revolution. 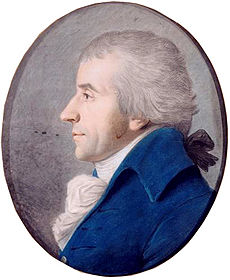 Brissot’s stance on the King’s execution, the war with Austria and his moderate views on the Revolution inevitably led to intense friction between the Girondins and Montagnards as well as the Sans-culottes. Brissot attempted to rein in the violence and excesses of the Revolution by calling for the reinstatement of the constitutional monarchy that had been established by the Constitution of 1791, a ploy which landed on deaf ears. In late May of 1793, the Montagnards in the Convention, meeting in the Tuileries Palace, called for the removal of the Commission of Twelve. The Convention was further radicalized by the call for the removal and arrest of Brissot and the entire Girondin party made by the Sans-culottes in the Parisian National Guard, which had surrounded the Convention, armed with cannons.[7] When the refusal of the Convention to make such a hasty decision was delivered to the National Guard, Hanriot, its leader, replied:

Tell your stupid president that he and his Assembly are doomed, and that if within one hour he doesn’t deliver to me the Twenty-two, I’m going to blast it![8]

With this threat of violence, the Convention voted, and on 2 June 1793, Brissot along with twenty-eight other members were arrested.[9] Brissot was one of the first Girondins to try and escape, but was also one of the first captured. First passing through his hometown of Chartres on his way to the city of Caen, the center of anti-revolutionary forces in Normandy, he was caught traveling with false papers on 10 June, and was taken back to Paris.[10] On 3 October, the trial of Brissot and the Girondins began. They were charged with being “agents of the counter-revolution and of the foreign powers, especially Britain.”[11] Brissot, who personally defended himself, brought up point by point the absurdities of the charges against him and his fellow Girondins. Regardless of their efforts, on 30 October the death sentence was delivered to Brissot and the other twenty-one Girondins.[12] The very next day, the convicted men were taken by tumbrel to the guillotine, along the way singing La Marseillaise, embracing the role of martyred patriots.[13] Brissot died by the guillotine at the age of thirty-nine, and his corpse was buried in the Madeleine Cemetery.

One aspect of Brissot’s career that was under intense scrutiny and question, was his life after the Bastille. While enthusiasts and apologists see Brissot as an idealist, and unblemished, philosophe revolutionary, his detractors have challenged his credibility and moral character by repeating allegations that during the mid-1780s he was involved in the production and dissemination of pornographic libelles, spied for the police and or the British and defrauded his business partner.[14] The accusations were led by Jean-Paul Marat, Camille Desmoulins, Maximilian Robespierre, and above all the notorious scandal-monger, extortioner, and perjurer Charles Théveneau de Morande, whose hatred, Brissot asserted, ‘was the torment of my life’.

In the 1980s they have been backed up by the historian Robert Darnton.[15] They accused Brissot of being a police spy, saying that he was plotting against the revolution he had once stood behind. Brissot was sent to court to defend himself on many occasions from these accusations. Darnton argues that Brissot on a personal level was not in support of the Revolution, and had gone to a police station where he asked if he could be of assistance. When he was turned away, Darnton says, he proceeded to give them information. The only problem with his accusations, argues historian Fredrick Luna, is that the letters in which Darnton got his information were written fifteen years after the supposed incident. Luna argues that this could not have been the case; Brissot was noted as leaving Paris as soon as he was released from the Bastille. So if he was not in Paris, he would not have talked with the police.[16]

Through his writings Brissot made important contributions to "prerevolutionary and revolutionary ideology in France".[17] His early works on legislation, his many pamphlets, speeches in the Legislative Assembly and the Convention, demonstrated dedication to the principles of the French Revolution.