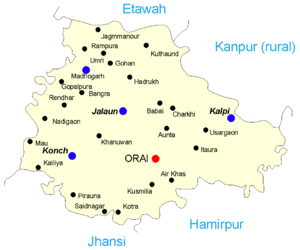 Jalaun District (Hindi:जालौन) is a district of Uttar Pradesh state of India.

The district has been under severe drought for the last four years with the average rainfall being about 399 mm which is way behind the average of about 800 mm.

In 2006 the Ministry of Panchayati Raj named Jalaun one of the country's 250 most backward districts (out of a total of 640).[2] It is one of the 34 districts in Uttar Pradesh currently receiving funds from the Backward Regions Grant Fund Programme (BRGF).[2]