From Infogalactic: the planetary knowledge core
Jump to: navigation, search
For other people of the same name, see James Abercromby (disambiguation).

Colonel James Abercrombie (1732 – 23 June 1775) was a British army officer who died during the American Revolutionary War. 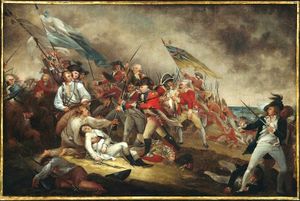 There is much uncertainty about Abercrombie's family. He may have been related to General James Abercrombie, but the Dictionary of Canadian Biography states that the common identification of him as the general's son or nephew is probably erroneous.

On 11 June 1744 Abercrombie was made Lieutenant of the 1st Foot. On 16 February 1756, he was promoted to the rank of Captain of the 42nd Foot. With this rank he served in the French and Indian War, notably as one of General Abercrombie's aides in the Battle of Fort Carillon at Ticonderoga in 1758 before being made aide-de-camp to General Amherst in 1759. He was promoted to the rank of lieutenant colonel in 1770.

On June 17, 1775, Abercrombie led the grenadier battalion in their charge of the redoubt on the Americans' left wing at the Battle of Bunker Hill. During the assault on Breed's Hill, he sustained a gunshot wound from an African soldier named Salem Poor. After removal from the Bunker Hill battleground, he was treated at a hospital facility in Boston. He succumbed to his wound a week later at the residence of British military engineer John Montresor.