Baker attended The Hill School, a boarding school in Pottstown, Pennsylvania. He graduated from Princeton University in 1952. Afterwards, he earned a J.D. (1957) from The University of Texas at Austin, was a member of Phi Delta Theta, and began to practice law in Texas.[5]

Baker's first wife, the former Mary Stuart McHenry, was active in the Republican Party, working on the Congressional campaigns of George H. W. Bush. Originally, Baker had been a Democrat but too busy trying to succeed in a competitive law firm to worry about politics, and considered himself apolitical. His wife's influence led Baker to politics and the Republican Party. He was a regular tennis partner of George H. W. Bush at the Houston Country Club in the late 1950s. When Bush Sr. decided to vacate his Congressional seat and run for the U.S. Senate in 1969, he supported Baker's decision to run for the Congressional seat he was vacating. However, Baker changed his mind about running for Congress when his wife was diagnosed with breast cancer; she died in February 1970.

Bush Sr. then encouraged Baker to become active in politics to help deal with the grief of his wife's death, something that Bush Sr. himself had done when his daughter, Pauline Robinson (1949–1953), died of leukemia. Baker became chairman of Bush's Senate campaign in Harris County, Texas. Though Bush lost to Lloyd Bentsen in the election, Baker continued in politics, becoming the Finance Chairman of the Republican Party in 1971. The following year, he was selected as Gulf Coast Regional Chairman for the Richard Nixon presidential campaign. In 1973 and 1974, in the wake of the Nixon Administration's implosion, Baker returned to full-time law practice at Andrews & Kurth.[6][7]

Baker's time away from politics was very brief, however. He served as Undersecretary of Commerce for President Gerald Ford and ran Ford's unsuccessful 1976 election campaign. In 1978, with George H. W. Bush as his campaign manager, Baker ran unsuccessfully for Attorney General of Texas, losing to future Texas governor Mark White. 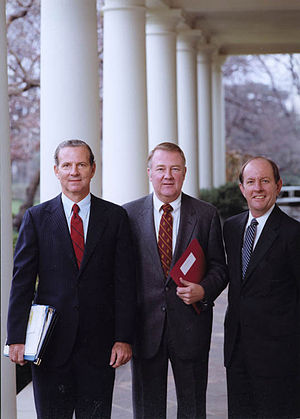 "The Troika" (from left to right) Chief of Staff James Baker, Counselor to the President Ed Meese, Deputy Chief of Staff Michael Deaver at the White House, December 2, 1981.

In 1981, Baker was named White House Chief of Staff by President Ronald Reagan, in spite of the fact that Baker managed the presidential campaigns of Gerald Ford in 1976 and of George Bush in 1980 opposing Reagan.[8] He served in that capacity until 1985. Baker is considered to have had a high degree of influence over the first Reagan Administration, particularly in domestic policy.

In 1982, conservative activists Howard Phillips, founder of The Conservative Caucus, and Clymer Wright of Houston joined in an unsuccessful effort to convince Reagan to dismiss Baker as Chief of Staff. They claimed that Baker, a former Democrat and a Bush political intimate, was undermining conservative initiatives in the administration. Reagan rejected the Phillips-Wright request, but in 1985, he named Baker as United States Secretary of the Treasury, in a job-swap with then Secretary Donald T. Regan, a former Merrill Lynch officer who became Chief of Staff. Reagan rebuked Phillips and Wright for having waged a "campaign of sabotage" against Baker.[9]

While serving as Treasury Secretary, Baker organized the Plaza Accord of September 1985 and the Baker Plan to target international debt. He had Richard Darman of Massachusetts as his Deputy Secretary of the Treasury. Darman would continue in the next administration as the Director of the Office of Management and Budget.

In 1985, Baker received the U.S. Senator John Heinz Award for Greatest Public Service by an Elected or Appointed Official, an award given out annually by Jefferson Awards.[11]

During the Reagan Administration, Baker also served on the Economic Policy Council, where he played an instrumental role in achieving the passage of the administration's tax and budget reform package in 1981. He also played a role in the development of th Silver Eagle and the Gold Eagle, which both were released in 1986.

On January 9, 1991, during the Geneva Peace Conference with Tariq Aziz in Geneva, Baker declared that "If there is any user of (chemical or biological weapons), our objectives won't just be the liberation of Kuwait, but the elimination of the current Iraqi regime...."[14] Baker later acknowledged that the intent of this statement was to threaten a retaliatory nuclear strike on Iraq,[15] and the Iraqis received his message.[16] Baker helped to construct the 34-nation alliance that fought alongside the United States in the Gulf War.[17]

He was awarded the Presidential Medal of Freedom in 1991. 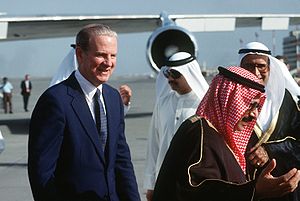 Baker blocked the creation of Palestine by threatening to cut funding to agencies in the United Nations.[18] As far back as 1988, the Palestine Liberation Organization (PLO) issued a "declaration of statehood” and changed the name of its observer delegation to the United Nations from the PLO to Palestine.

Baker warned publicly, "I will recommend to the President that the United States make no further contributions, voluntary or assessed, to any international organization which makes any changes in the PLO's status as an observer organization."

In 1993 Baker became the founding chair of the James A. Baker III Institute of Public Policy at Rice University in Houston, Texas.

Also in 1993, the Enron Corporation hired Baker as a consultant within a month of his departure from the White House, and Enron said that Baker would have an opportunity to invest in any projects he developed.[19]

In March 1997, Baker became the Personal Envoy of the UN Secretary-General for Western Sahara.[20] In June 2004 he resigned from this position, frustrated over the lack of progress in reaching a complete settlement acceptable to both the government of Morocco and the pro-independence Polisario Front. He left behind the Baker II plan, accepted as a suitable basis of negotiations by the Polisario and unanimously endorsed by the Security Council, but rejected by Morocco.

In addition to the numerous recognitions received by Baker, he was presented with the prestigious Woodrow Wilson Award for public service on September 13, 2000 in Washington, D.C..

In 2000, Baker served as chief legal adviser for George W. Bush during the 2000 election campaign and oversaw the Florida recount. A 2008 film Recount covers the days following the controversial election. During the making of the film Baker was interviewed. Baker was portrayed in the film by British actor Tom Wilkinson.

On September 11, 2001, Baker watched television coverage of the attacks on the World Trade Center and the Pentagon from the Ritz-Carlton Hotel in Washington DC, where Baker and representatives of Osama bin Laden's family were among those attending the annual conference for the Carlyle Group. Baker is Senior Counselor for the Carlyle Group, and the bin Ladens are among its major investors.[21][dubious – discuss]

State of Denial, a book by investigative reporter Bob Woodward, says that White House Chief of Staff Andrew Card urged President Bush to replace Secretary of Defense Donald Rumsfeld with Baker following the 2004 election. However, another G. H. W. Bush Administration veteran, Robert Gates, was appointed instead, and only after the 2006 elections. Baker was elected a Fellow of the American Academy of Arts and Sciences in 2008.[22]

In December 2003, President George W. Bush appointed Baker as his special envoy to ask various foreign creditor nations to forgive or restructure $100 billion in international debts owed by the Iraq government which had been incurred during the tenure of Saddam Hussein.[23] On March 15, 2006, Congress announced the formation of the Iraq Study Group, a high-level panel of prominent former officials charged by members of Congress with taking a fresh look at America's policy on Iraq. Baker was the Republican Co-Chairman along with Democratic Congressman Lee H. Hamilton, to advise Congress on Iraq.[24] Baker also advised George W. Bush on Iraq.[25]

The Iraq Study Group examined a number of ideas, including one that would create a new power-sharing arrangement in Iraq that would give more autonomy to regional factions.[26] On October 9, 2006, the Washington Post quoted co-chairman Baker as saying "our commission believes that there are alternatives between the stated alternatives, the ones that are out there in the political debate, of 'stay the course' and 'cut and run'".

Baker serves on the Honorary Council of Advisers for the U.S.-Azerbaijan Chamber of Commerce.[27][28]

In May 2015, Secretary of Defense Ash Carter appointed Baker to serve as the director, Office of Net Assessment. Baker succeeded Andrew Marshall, who retired in January after 42 years in the role.[29]

Baker met his first wife, the former Mary Stuart McHenry, of Dayton, Ohio while on spring break in Bermuda with the Princeton University rugby team. They married in 1953. Together they had four sons. Mary Stuart Baker (Mary Stuart was her full first name) died of breast cancer in February 1970.

In 1973, Baker and Susan Garrett Winston, a widow and a close friend of Mary Stuart, were married.[7] She had two sons and a daughter with her late husband. She and Baker welcomed their daughter Mary Bonner Baker born in 1977.

On June 15, 2002, Virginia Graeme Baker, the seven-year-old granddaughter of Baker, daughter of Nancy and James Baker IV, was the victim of lethal suction-pump entrapment in an in-ground spa.[30] To promote greater safety in pools and spas, Nancy Baker gave testimony to the Consumer Product Safety Commission,[31] and James Baker helped form an advocacy group,[32] which led to the Virginia Graeme Baker Pool And Spa Safety Act (15 USC 8001).[33]