From Infogalactic: the planetary knowledge core
Jump to: navigation, search
File:Photo 2008 0905 Rushbrook TV.JPG
Photograph taken at the unveiling of the new statue of James Braidwood in Edinburgh on 5 September 2008. The person in the dark suit and tie was the statue's main sponsor, Dr Frank Rushbrook CBE

He was born in Edinburgh the tenth child of Francis James Braidwood a cabinetmaker, and Janet Mitchell. He was educated at the Royal High School. He learned about the construction of buildings after joining his father's building firm as an apprentice, knowledge he was later to put to good use. 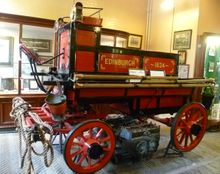 One of Edinburgh's first fire engines from 1824

Appointed Master of Fire Engines at the age of twenty-four, just two months prior to the Great Fire of Edinburgh, Braidwood established principles of fire-fighting that are still applied today. His training as a surveyor gave him exceptional knowledge of the behaviour of building materials and housing conditions in the Old Town of Edinburgh. He recruited to the service expert tradesmen – slaters, carpenters, masons and plumbers – who could apply their various fields of expertise to fire fighting. He also recruited experienced mariners for an occupation that required heavy manual work in hauling engines and trundling wheeled escape ladders up and down Edinburgh's steep streets, as well as nimble footwork when negotiating rooftops and moving through partially destroyed buildings. His many original ideas of practical organisation and methodology, published in 1830, were adopted throughout Britain. He was, however, resistant to the introduction of steam-driven engines. In 1833 he left Edinburgh to lead the London Fire Engine Establishment.

Braidwood was distinguished for his heroism on the occasion of great fires in Edinburgh (1824) and London (1830). He also undertook a pastoral role, introducing visits to ordinary firemen and their families by the London City Mission.

As a strange curiosity, Braidwood was the first witness at the trial of William Burke of Burke and Hare fame. He gave evidence on Christmas Eve of 1828, in his capacity as an Edinburgh builder, who had been commissioned by the authourities to draw scale plans of the notorious lodging house on Tanners Close where the murders took place. His evidence was simple to state that the plans were an accurate representation of the building.[3] 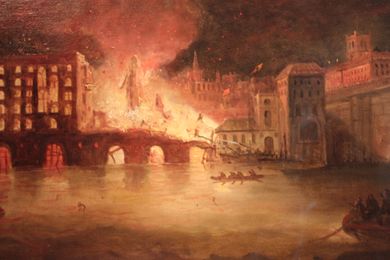 On 22 June 1861 his life was claimed in the Tooley Street fire at Cotton's Wharf near London Bridge station when a falling wall crushed him to death, three hours after the fire began.[4] It took two days to recover his body and his heroism led to a massive funeral on 29 June where his funeral cortege stretched one and a half miles behind the hearse, a public spectacle equal almost to the Tooley Street fire itself.[5] The fire, which continued to burn for a fortnight, caused £2,000,000 worth of damage. A London fireboat was named in his honour in the 1930s.

Braidwood is buried at Abney Park Cemetery, Stoke Newington, London, not far from the Stoke Newington Fire Station. The grave lies on a path edge towards the south, rendering it relatively easy to see in this congested and overgrown cemetery. His wife, Mary Ann Jane Braidwood (1806-1871) was buried with him.

The death of James Braidwood, whilst engaged in fire fighting duties, is recorded on the National Firefighters Memorial which is located adjacent to St Pauls Cathedral in the City of London. More information at www.firefightersmemorial.co.uk

A group of former London Firefighters decided to form a new Masonic Lodge. They chose to remember the life and death of this famous fireman by naming the Lodge after him. Consecrated in 2005 this is now known as the Braidwood Lodge Number 9802 in the Province of West Kent.

Recognizing the lack of publications on Fire Engines in the English language, Braidwood published what is regarded as one of the first text books on the science of fire engineering in 1830: On the Construction of Fire Engines and Apparatus.[6] Although many historical (Public domain) books often are re-published, Braidwood's book was officially re-published as a second edition in 2004. Braidwood also authored Fire prevention and fire extinction,[7] published posthumously in 1866.

On 5 September 2008, the James Braidwood memorial statue in Parliament Square, Edinburgh was unveiled by Professor Sir Timothy O'Shea, Principal of Edinburgh University.[8] A fund had been established for a £75,000 memorial to Braidwood, to be created by the Glasgow sculptor, Kenneth Mackay, led by Dr Frank Rushbrook CBE, 93-year-old former Firemaster at Lothian & Borders Fire Brigade. The statue stands around the corner from the site of the original main fire station in the High Street. The bronze plaque below it reads:

Dr Rushbrook was also the benefactor of the Fire Laboratory that lies at the heart of the BRE Centre for Fire Safety Engineering, in the School of Engineering at The University of Edinburgh. His gift was motivated by a desire to promote education in applied fire science, and is routinely used for experimental classes on the undergraduate and taught postgraduate fire programmes at the university, together with PhD/post-doctoral research and also on occasion by fire service personnel. The laboratory was officially opened in 2003, and has since been expanded to two floors.