Bryce was born in Arthur Street, Belfast, County Antrim, the son of James Bryce, LL.D., of Glasgow, by his wife Margaret, daughter of James Young of Whiteabbey, County Antrim. The first eight years of his life were spent residing at his grandfather’s Whiteabbey residence, often playing for hours on the tranquil picturesque shoreline. John Annan Bryce was his younger brother.[1] He was educated under his uncle Reuben John Bryce at the Belfast Academy,[2] Glasgow High School, the University of Glasgow, the University of Heidelberg and Trinity College, Oxford. He was elected a fellow of Oriel College, Oxford, in 1862 and was called to the Bar, Lincoln's Inn, in 1867.[1] His days as a student at the University of Heidelberg gave him a long-life admiration of German historical and legal scholarship. He became a believer in "Teutonic freedom", an ill-defined concept that was held to bind Germany, Britain, and the United States together. For him, the United States, the British Empire and Germany were "natural friends".[3]

Bryce went to the bar and practised in London for a few years[citation needed] but was soon called back to Oxford as Regius Professor of Civil Law, a position he held between 1870 and 1893. From 1870 to 1875, he was also Professor of Jurisprudence at Owen's College, Manchester.[1] His reputation as an historian had been made as early as 1864 by his work on the Holy Roman Empire.

In 1872, he travelled to Iceland to see the land of the Icelandic sagas as he was a great admirer of Njáls saga. In 1876, he ventured through Russia to Mount Ararat, climbed above the tree line and found a piece of hand-hewn timber, four feet long and five inches thick. He agreed that the evidence fit the Armenian church's belief that it was from Noah's Ark and out of respect, he offered no other explanations.[4] 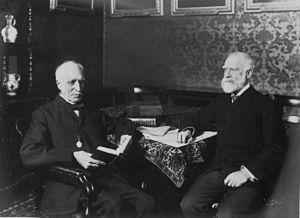 Bryce was an ardent Liberal in politics and, in 1880, he was elected to parliament for the Tower Hamlets constituency in London.[1][5] In 1885, he was returned for South Aberdeen and was re-elected there on succeeding occasions. He remained a Member of Parliament until 1907.[1][6]

Bryce's intellectual distinction and political industry made him a valuable member of the Liberal Party. As early as the late 1860s, he acted as Chairman of the Royal Commission on Secondary Education.[citation needed] In 1885, he was made Under-Secretary of State for Foreign Affairs under William Ewart Gladstone but had to leave office after the electoral defeat that same year. In 1892, he joined Gladstone's last cabinet as Chancellor of the Duchy of Lancaster[7] and was sworn of the Privy Council at the same time.[8]

In 1894, he was appointed President of the Board of Trade in the new cabinet of Lord Rosebery,[9] but had to leave this office with that whole Liberal cabinet only the next year.[1]

The Liberals were to remain out of office for the next ten years. In 1897, after a visit to South Africa, Bryce published a volume of Impressions of that country, which had considerable weight in Liberal circles when the Second Boer War was being discussed. He was one of the harshest critics of British repressive policy against Boer civilians in the South African partisan War. Taking the risk of being very unpopular for a certain moment, he condemned the systematic burning of farms and the imprisonment of old people, women and children in British concentration camps.[citation needed]

The "still radical" Bryce was made Chief Secretary for Ireland in Prime Minister Sir Henry Campbell-Bannerman's cabinet in 1905 and remained there throughout 1906.[1][10] In his approach to domestic politics, Bryce was critical of many of the Liberal Government's social reforms, including old-age pensions, the Trade Disputes Act, and the redistributive “People’s Budget,” which he regarded as unwarranted concessions to socialism.[11]

Ambassador to the United States 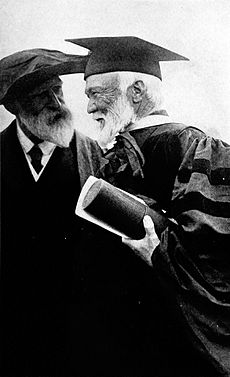 However, even this time, Bryce's cabinet post was held only for a brief period because as soon as February 1907, he was appointed British Ambassador to the United States of America.[12] He kept this diplomatic office until 1913 and was very efficient in strengthening the Anglo-American friendship. Bryce made many personal friends in American politics such as US President Theodore Roosevelt.[citation needed] The German ambassador in Washington, Graf Heinrich von Bernstorff, later admitted how relieved he felt that Bryce was not his competitor for American sympathies during the World War period even though Bernstorff managed to keep the US from declaring war until 1917.[citation needed] 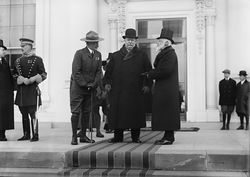 Robert Baden-Powell, William Taft and James Bryce at the White House in 1912

As an author, Bryce quickly became well known in America for his 1888 work, The American Commonwealth. The book thoroughly examined the institutions of the United States from the point of view of a historian and constitutional lawyer and at once became a classic. In developing material for his book, Bryce painstakingly reproduced the travels of Alexis de Tocqueville, who wrote Democracy in America (1835–40). Although Tocqueville emphasized the egalitarian nature of early-19th-century America, Bryce was dismayed to find vast inequality: "Sixty years ago, there were no great fortunes in America, few large fortunes, no poverty. Now there is some poverty... and a greater number of gigantic fortunes than in any other country of the world"[13] and "As respects education... the profusion of…elementary schools tends to raise the mass to a higher point than in Europe... [but] there is an increasing class that has studied at the best universities. It appears that equality has diminished [in this regard] and will diminish further."[14] The work was heavily used in academia as a result of Bryce's close friendships with men such as President James B. Angell of the University of Michigan and successively Charles W. Eliot and Abbott Lawrence Lowell at Harvard.[15] Against the backdrop of the New Immigration of the late nineteenth century, the work also became a key medium for popularising the view of American history as distinctly Anglo-Saxon, comparable with similarly exceptionalist "Whig" histories written in late Victorian Britain.[16]

After his retirement as ambassador and his return to Great Britain, he was raised to the peerage as Viscount Bryce, of Dechmount in the County of Lanark, in 1914.[17] Thus, he became a member of the House of Lords, the powers of which had been curtailed in the Liberal Parliamentary Reform of 1911.

Following the outbreak of the First World War, Bryce was commissioned by Prime Minister H. H. Asquith to give the official Bryce Report on alleged German atrocities in Belgium. The report was published in 1915 and was damning of German behaviour against civilians.

Bryce's accounts were confirmed by Vernon Lyman Kellogg, director of the American Commission for Relief in Belgium, who told the New York Times that the German military enslaved hundreds of thousands of Belgian workers and abused and maimed many of them in the process.[citation needed] However, much of the Bryce Report was just war propaganda that used the name of a famous scholar and included the notorious lie about cut off children's hands.

Bryce also strongly condemned the Armenian Genocide in the Ottoman Empire, mainly in the year 1915. Bryce was the first to speak on that subject in the House of Lords, in July 1915. Later, with the assistance of the historian Arnold J. Toynbee, he produced a documentary record of the massacres, published by the British government in 1916 as the Blue Book. In 1921, Bryce wrote that the Armenian genocide had also claimed half of the population of Assyrians in the Ottoman Empire and that similar cruelties were perpetrated upon them.[18][19]

During the last years of his life, Bryce served at the International Court at The Hague, supported the establishment of the League of Nations and published a book, Modern Democracy, in 1921 which was rather critical of post-war democracy. For example, he strongly but unsuccessfully opposed women being allowed to vote.[citation needed]

Honours and other public appointments

Bryce received numerous academic honors from home and foreign universities. In September 1901, he received the degree of Doctor of Laws from Dartmouth College.[20] He became a fellow of the Royal Society in 1894.

In earlier life, he was a notable mountain climber, ascending Mount Ararat in 1876, and published a volume on Transcaucasia and Ararat in 1877; in 1899 to 1901, he was the president of the Alpine Club. From his Caucasian journey, he brought back a deep distrust of Ottoman rule in Asia Minor and a distinct sympathy for the Armenian people.[citation needed]

In 1907, he was made a Member of the Order of Merit by King Edward VII. At the King's death, Bryce arranged his Washington Memorial Service.[23] At the time of Lord Bryce's memorial service at Westminster Abbey, his wife, Lady Bryce, received condolences from King George V, who "regarded Lord Bryce as an old friend and trusted counsellor to whom I could always turn."[24] Queen Victoria had said that Bryce was "one of the best informed men on all subjects I have ever met".[25][26]

He was also the president of the British Academy from 1913 to 1917.[1] In 2013, the Ulster History Circle unveiled a blue plaque dedicated to him, near his birthplace in Belfast. 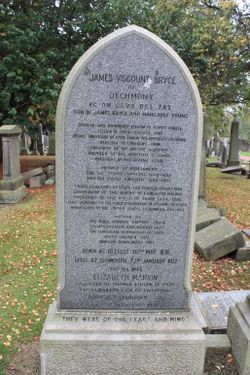 Lord Bryce married Elizabeth Marion, daughter of Thomas Ashton and sister of Lord Ashton, 1st Baron Ashton of Hyde in 1889. They had no children. It was reported in June 2013 that Lord Bryce was a brother-in-law to members of the Lupton family of Leeds who were the paternal ancestors of Catherine, Duchess of Cambridge.[27] He died on 22 January 1922, aged 83, in Sidmouth, Devon, on the last of his lifelong travels, and was cremated at Golders Green Crematorium.[28]

A large monument is erected to him in the south-west section of Grange Cemetery in Edinburgh (facing north at the west end of the central east-west avenue) and his ashes are presumed to be here. There is also a bust of Viscount James Bryce in Trinity Church on Broadway near Wall Street. A similar bust is in the Capitol Building and there is a commemorative Bryce Park in Washington DC . The viscountcy died with him. Lady Bryce died in December 1939 and is buried with his ashes.[1] In 1965, the James Bryce Chair of Government (changed to Politics in 1970) was endowed in his honour at the University of Glasgow. 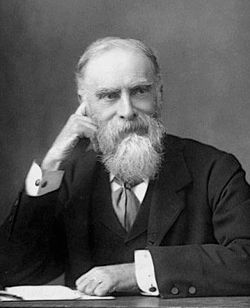 His Studies in History and Jurisprudence (1901) and Studies in Contemporary Biography (1903) were republications of essays.