James Brydges, 1st Duke of Chandos, PC, DL, FRS (6 January 1673 – 9 August 1744) was an English landowner and politician who sat in the English and British House of Commons from 1698 until 1714, when he succeeded to the peerage as Baron Chandos, and vacated his seat in the House of Commons to sit in the House of Lords. He was subsequently created Earl of Carnarvon, and then Duke of Chandos in 1719.[1]

Brydges was born at Dewsall, Herefordshire, the fourth, but eldest surviving son of James Brydges, 8th Baron Chandos and his wife Elizabeth Barnard, daughter of Sir Henry Barnard, merchant of St Dunstan-in-the-East, London, and of Bridgnorth, Shropshire.[2] He was educated at Westminster School in 1686, and at New College, Oxford, from 1690 to 1692.[3] He was at the Wolfenbüttel academy from 1692 to 1694 and in 1694 he was elected to the Royal Society.

Brydges succeeded his father as 9th Baron Chandos on 16 October 1714, and was created Earl of Carnarvon on 19 October 1714. He took up the role of joint clerk of hanaper in reversion in November 1714. In 1718 he became governor of the Levant Company until 1736. He was created Duke of Chandos on 29 April 1719. In 1721 he became a governor of Charterhouse. He was Lord Lieutenant of the counties of Hereford and Radnor and steward of crown manors for Radnorshire. He became a member of the Privy Council on 11 November 1721. He was Chancellor of the University of St Andrews (where he established the Chandos Chair of Medicine and Anatomy in 1721) from 1724 for the rest of his life. In 1737 he was appointed ranger of Enfield chase 1737.[2] He became one of the founding governors of the Foundling Hospital in 1739.[4]

Brydges amassed great wealth through his public offices. The ethics of his financial operations were called into question at the time, but it was generally accepted that people could profit from public office. He continued to engage in speculative investments after being made Duke of Chandos in 1719, but lost money in the South Sea Bubble and the York Buildings Company.

Brydges built a magnificent house "at vast expense"[5] at Cannons, an estate near Edgware in Middlesex. There he ran through several architects prominent in the English Baroque. He began in 1713 with William Talman, whom he dismissed in favour of John James in 1714; James had partly executed his designs before James Gibbs succeeded him in 1715. Howard Colvin (ref) concludes that the south and east elevations, as well as the chapel, were the designs of Gibbs. Brydges dismissed Gibbs in 1719, and completed the house under the supervision of John Price[6] and, in 1723–25, Edward Shepherd. Cannons was demolished in 1747. On its site, now incorporated in Greater London, is Canons Park.

Brydges is said to have considered building a private road across his own lands between this place and his never completed house in Cavendish Square, London, probably also designed by Gibbs.[7] 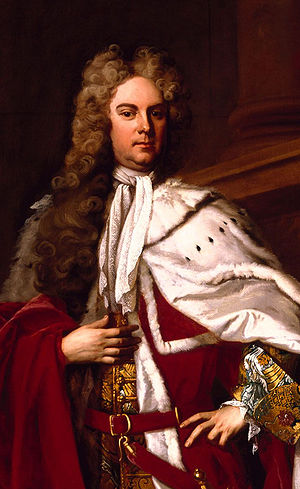 The Duke is chiefly remembered on account of his connections with George Frideric Handel, for whom he acted as a major patron, and with Alexander Pope,[1] seen as having slandered Chandos in one of his poems. He served as an early patron to his relative George Rodney, later to become famous for his victory at the Battle of the Saintes, during his early career in the navy.[8]

Before Chandos was made a duke, he employed the young composer George Frideric Handel over a period of two years, 1717–18. Handel lived at Cannons, where he composed his oratorio Esther and his pastoral opera Acis and Galatea. Handel also composed the Chandos Anthems for his patron; they were first performed at the parish church of St Lawrence, Little Stanmore, with the composer playing the organ of 1716 which has survived there to the present day.

In 1719 Chandos was one of main subscribers in the Royal Academy of Music, not the well-known conservatoire of that name but a corporation that produced baroque opera on stage in London.[9][10]

Alexander Pope, who in his Moral Essays (Epistle to the Earl of Burlington) was alleged to have ridiculed Cannons under the guise of Timon's Villa, later referred to the Duke in the line, "Thus gracious Chandos is belov'd at sight"; but Jonathan Swift, less complimentary, called him "a great complier with every court". The poet was caricatured by Hogarth for his supposed servility to Chandos.[1] Pope published a denial of his alleged satire of the Duke's estate, in which he said that the estate of the poem "differs in every particular from" Chandos's. According to Pope biographer Maynard Mack, Chandos thereafter assured Pope by letter that he believed him, i.e. that the Epistle to Burlington was not intended as a satire of his estate. The malice, indeed, was on the part not of Pope, but of the insinuators and slanderers, the hack writers whom Pope had ridiculed as dunces in his Dunciad; Mack calls the affair a "falsehood of considerable damage to [Pope's] character".

His first wife Mary died on 15 September 1712. He then married Cassandra Willoughby the daughter of Francis Willoughby and Emma Barnard on 4 August 1713.

Chandos died in Cannons on 9 August 1744). Chandos and several members of his family (his first two wives) are buried at the Chandos Mausoleum at the Church of St Lawrence, Whitchurch Lane, Little Stanmore, London.[11] His third wife, who survived him, moved to Shaw House, Berkshire where she died in 1750.

Mrs. Elizabeth Montagu in a letter, dated Sandleford, 21 December 1750 to Miss Anstey, wrote: "My dear Miss Anstey, ... A little before I went to London I lost my very good neighbour, the Dutchess of Chandos, a stroke of the palsy carried her off in a few days : her bodily pains were great, but her mind felt the serenity that gilds the evening of a virtuous life. She quitted the world with that decent fare-well which people take of it, who rather consider it as a place in which they are to impart good than to enjoy it Her character has made a great impression on me, as I think her a rare instance that age could not make conceited and stiff, nor retirement discontented, nor virtue inflexible and severe..."[12]

In a letter to Mrs. Donnellan dated Sandleford, 30 December 1750, Mrs. Montagu continued, "My rich neighbours are dull, and my poor ones are miserable ... The Dutchess of Chandos is greatly missed by the poor in this rigorous season. There is a family at Donnington Castle who are very generous and charitable, but nothing can entirely avail in a part of the world where manufacture decays; daily labour must give daily bread; occasional alms like medicine to the diseased, but can hardly procure constant health. To make the poor happy one must make them industrious..."[12]

Chandos was succeeded by his son, Henry Brydges, 2nd Duke of Chandos, who found the estate so encumbered by debt that a demolition sale of Cannons was held in 1747, which dispersed furnishings and structural elements, with the result that elements of Cannons survive in several English country houses, notably Lord Foley's house, Witley Court at Great Witley, and its chapel (ceiling paintings by Bellucci and stained glass by Joshua Price of York after designs by Francesco Sleter). The pulpit and other fittings from Chandos's chapel were reinstalled in the parish church at Fawley, Buckinghamshire, by John Freeman of Fawley Court.

The 1st Duke's sister, The Hon. Mary Brydges, married Theophilus Leigh. They were the great-grandparents of Jane Austen.