James Cook University (JCU) is a public university and is the second oldest university in Queensland, Australia. JCU is a teaching and research institution. The University's main campuses are located in the tropical cities of Cairns, Singapore and Townsville. JCU also has study centres in Mount Isa, Mackay and Thursday Island. A Brisbane campus, operated by Russo Higher Education, delivers undergraduate and postgraduate courses to international students. The University’s main fields of research include marine sciences, biodiversity, sustainable management of tropical ecosystems, genetics and genomics, tropical health care and tourism. 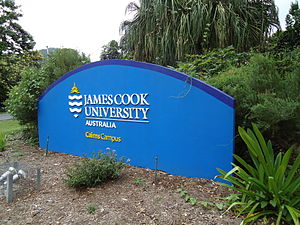 In 1957, Professor J.D Story, Vice Chancellor of the University of Queensland proposed a regional university college be established to cater to the people of North Queensland. At that time, the only higher education providers were located in the state capital Brisbane. On 27 February 1961, the University College of Townsville was opened.

After being proclaimed on 20 April 1970 as an Act of Queensland Parliament, the University College of Townsville became James Cook University of North Queensland on 29 April 1970.[2] The official opening of the university was conducted by Queen Elizabeth II.[3] The namesake is British sea captain James Cook, who is best known for discovering Australia. A year after JCU's proclamation, Cyclone Althea struck the Townsville region. This, together with the destruction caused by Cyclone Tracy in Darwin 1974, prompted the establishment of a cyclone research facility.[3][4] The Cyclone Testing Station started out as a small project of Professor Hugh Trollope and began its operations on 1 November 1977 as James Cook Cyclone Structural Testing Station.[4] The Cyclone Testing Station operates as a self funded unit of the College of Science, Technology and Engineering, and serves as an advising member to the Australian Standards committee in areas of structural design, specifically wind actions.[5]

On 1 January 1982, JCU amalgamated with The Townsville College of Advanced Education located adjacent to the main campus in Douglas. The university established a presence in Cairns in 1987 and moved to its current location in the suburb of Smithfield in 1995. On 1 January 1991, the School of Art and Design of the Townsville College of TAFE was transferred to JCU.[2] The current name of James Cook University became official on 1 January 1998.[6] In 2003 the University opened an international campus in Singapore. The university further expanded its presence by establishing another campus in Brisbane, Queensland in 2006.

Campuses and other facilities

James Cook University operates three main campuses, located in the tropical cities of Cairns and Townsville in Australia, and the international city of Singapore. Russo Higher Education delivers JCU courses at its Brisbane centre on behalf of the University. The University also operates study centres in Mackay, Mount Isa and Thursday Island. These study centres provide programs and support for students living in rural and remote areas.

The Cairns Campus of James Cook University is located 15 kilometres north of the Cairns central business district, in the suburb of Smithfield. JCU moved to this location from its original inner-city site in 1995. Also located on the campus grounds are Queensland Tropical Health Alliance (QTHA) facilities, Australian Tropical Herbarium (ATH), the Australian Tropical Forest Institute (ATFI), JCU Dental, and The Cairns Institute. Over 4 000 students study at JCU Cairns, including about 385 international students.

JCU's Townsville campus is the University’s largest campus and is located on 386 hectares in the suburb of Douglas, near the army base and the lee of Mt Stuart. Around 12,600 students study at JCU Townsville, including over 1,100 international students. Close to the university is the new Townsville Hospital and Tropical North Queensland Institute of TAFE.[7] Originally located in the suburb of Pimlico, the University moved to its current site in 1967. The Discovery Rise[8] project was announced in September 2007.[9] The $1 billion project is aimed at redeveloping the University's Townsville campus.[10] Construction is currently under way and the project is estimated to be completed in 2015.[11]

James Cook University's Singapore campus (JCUS) was opened in 2003. In February 2015, James Cook University Singapore relocated to a new campus at 149 Sims Drive, ceasing operations at its previous campus on Upper Thomson Road, where it had been operating since July 2008. In 2014 there were 3,594 students studying with JCU Singapore. Courses offered include business, education, information technology, psychology, environmental science, and tourism and hospitality, to international and domestic students. All degrees awarded are accredited by JCU Australia.[12] James Cook University Singapore is also certified locally by both EduTrust and the Council for Private Education and was given a "Gold Star" rating by EduTrust in 2015, the first private school to do so.[13]

JCU’s study centre in Mackay is called the Mackay Education and Research Centre (MERC) and is located at the Mackay Base Hospital. It accommodates the teaching of the Bachelor of Social Work and Bachelor of Nursing Science (pre registration) as well as providing facilities for medical and dental placements.

The Mount Isa Centre for Rural and Remote Health (MICRRH) provides training, development and support of the rural and remote health workforce and the management of key health issues in the rural and remote setting. The Centre offers the Bachelor of Nursing Science with a special emphasis on rural, remote and Indigenous health care.

There is also a study centre is located in the heritage courthouse building on Thursday Island, providing teaching and learning facilities for nursing and education students in the Torres Strait region, including the northern tip of Australia. The Thursday Island study centre opened in 2003.

The university serves as a catchment area for students from this region and beyond. In 2014, JCU's student population was at 22,370, which includes 7,429 international students.[14]

In 2001 the university took in its first medical students in its newly formed School of Medicine. An undergraduate veterinary degree was added to the university for the first time in 2006 and in 2009 the Bachelor of Dental Surgery commenced. Today the university offers undergraduate and postgraduate degrees in arts, humanities and social work; business, law and governance; creative media; education; engineering and planning; healthcare, rehabilitation and psychology; medicine, dentistry and pharmacy; public health; science, including marine biology and environmental science; and veterinary science. Some courses are available externally. 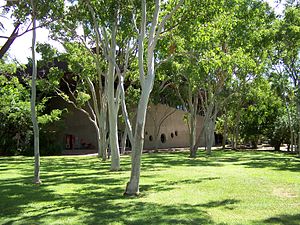 The library at Douglas Campus 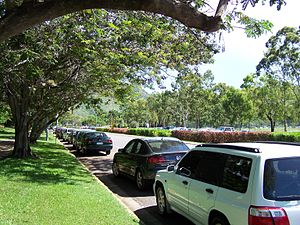 The university is organised into divisions, colleges, directorates, research centres and institutes.

Division of Tropical Environments and Societies

Division of Tropical Health and Medicine

Division of Research and Innovation

Division of Services and Resources

As of 2015, JCU has been awarded five stars for job success by the Good Universities Guide. In 2015, JCU Singapore earned the distinction of being the first private education institution to attain the EduTrust Star quality mark from the Singapore Government.

JCU has consistently ranked in the top 400 academic universities worldwide since 2010, as measured by the Academic Ranking of World Universities (ARWU),[19] achieving position 351 globally in 2013.[20] For 2015, JCU ranked in the top four percent of universities in the world by ARWU.[21] In 2014, JCU was also ranked in the top two Australian universities and top 30 in the world in Environmental Sciences and Ecology by the U.S. News & World Report and NTU Global Rankings. JCU is also the World's leading coral reef research institution by publications and citations in the Scopus Bibliometric data (Elsevier) 2010-2014.

In 2014, JCU was one of the only two universities to receive the maximum number of citations for Outstanding Contributions to Student Learning by the Australian Awards for University Teaching, Office of Learning and Teaching.

Residential colleges and halls of residence 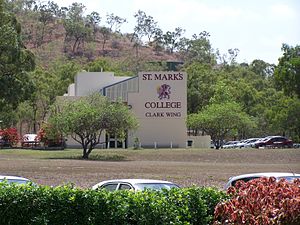 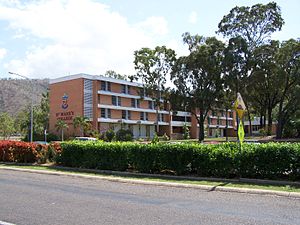 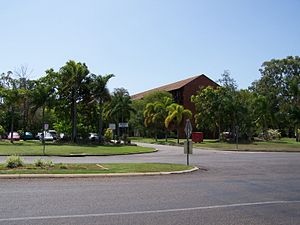 JCU's Douglas Campus in Townsville has seven on-campus residential halls and colleges, which can accommodate 1,475 students. Services offered by these facilities vary from self-catered to fully catered, and support to students. They are situated in the tropical gardens of the campus.

Saints Catholic College was formed in 2011 with the amalgamation of the Catholic Colleges of St Raphael and St Paul and the addition of a third wing, St Mary MacKillop Wing, in honour of Australia’s first Saint. Saint Mark's College is an Affiliated Residential College of JCU and can accommodate 154 male and female students. The College enrols JCU students, primarily from regional and rural Queensland, but also from across Australia and overseas. The John Flynn College was established in 1968. It is a privately run residential college providing accommodation for more than 200 Australian and International JCU students.

JCU manages four non-denominational halls for 700 students. George Roberts Hall opened in 2002 with 250 residents in unit style accommodation. Rotary International House was established in 1990, with the assistance of Rotary Clubs. This facility contains 80 beds. University Hall was the first residence to be established at the University in the 1960s, and is at present the largest of the student residences with 291 rooms. Western Courts can accommodate 112 students and was established in early 2008 to offset the closure of Western Hall, a former Residential Hall at JCU. Plans are underway for on-campus accommodation facilities to be built in Cairns.

This is a list of alumni and former faculty and staff of James Cook University, including preceding institutions such as Townsville University College and Townsville College of Advanced Education.

Recipients of honorary degrees include: