James Craig, 1st Viscount Craigavon, Bt PC, PC (NI) (8 January 1871 – 24 November 1940), was a prominent Irish unionist politician, leader of the Ulster Unionist Party and the first Prime Minister of Northern Ireland. He was created a baronet in 1918 and raised to the Peerage in 1927.

Craig was born at Sydenham, Belfast, the son of James Craig (1828–1900), a wealthy whiskey distiller; he had entered the firm of Dunville Whisky as a clerk and by aged 40 he was a millionaire and a partner in the firm. James Craig Snr. owned a large house called Craigavon, overlooking Belfast Lough. His mother, Eleanor Gilmore Browne, was the daughter of Robert Browne, a prosperous man who owned property in Belfast and a farm outside Lisburn. Craig was the seventh child and sixth son in the family; there were eight sons and one daughter in all.[citation needed]

He was educated at Merchiston Castle School in Edinburgh, Scotland; his father had taken a conscious decision not to send his sons to any of the more fashionable public schools. After school he began work as a stockbroker, eventually opening his own firm in Belfast.

He enlisted in the 3rd (militia) regiment of the Royal Irish Rifles on 11 January 1900 to serve in the Second Boer War. Military life suited him well, but he became impatient with the lack of professionalism and efficiency in the British Army. He was seconded to the Imperial Yeomanry, becoming a lieutenant and then a captain, was taken prisoner in May 1900, but released by the Boers because of a perforated eardrum.[citation needed] On his recovery he became deputy assistant director of the Imperial Military Railways, showing the qualities of organisation that were to mark his involvement in both British and Ulster politics. In June 1901 he was sent home suffering from dysentery, and by the time he was fit for service again the war was over.[citation needed] 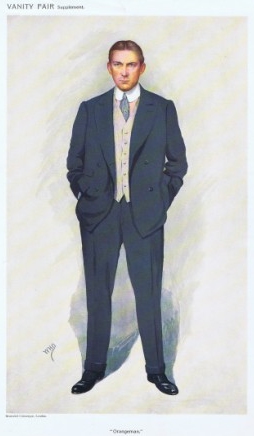 Craig caricatured by WHO for Vanity Fair, 1911

On his return to Ireland, having received a £100,000 legacy from his father's will, he turned to politics, serving as Member of the British Parliament for East Down from 1906 to 1918. From 1918 to 1921 he represented Mid Down, and served in the British government as Parliamentary Secretary to the Minister for Pensions (1919–1920) and Parliamentary Secretary to the Admiralty (1920–1921).

Craig rallied Ulster loyalist opposition to Irish Home Rule in Ulster before the First World War, organising the paramilitary Ulster Volunteers (UVF) and buying arms from Imperial Germany. The UVF became the nucleus of the 36th (Ulster) Division during the First World War. He succeeded Edward Carson as leader of the Ulster Unionist Party in February 1921.

Later that year, speaking in the House of Commons at Stormont on the 21 November 1934 in response to an accusation that all government appointments in Northern Ireland were carried out on a religious basis, he replied: ‘... it is undoubtedly our duty and our privilege, and always will be, to see that those appointed by us possess the most unimpeachable loyalty to the King and Constitution. That is my whole object in carrying on a Protestant Government for a Protestant people. I repeat it in this House’.[4]

He was made a baronet in 1918, and in 1927 was created Viscount Craigavon, of Stormont in the County of Down. He was also the recipient of honorary degrees from The Queen's University of Belfast (1922) and Oxford University (1926).

Craig had made his career in British as well as Northern Irish politics; but his premiership showed little sign of his earlier close acquaintance with the British political world. He became intensely parochial, and suffered from his loss of intimacy with British politicians in 1938, when the British government concluded agreements with Dublin to end the Anglo-Irish economic war between the two states, on terms highly unfavourable to Northern Ireland. He never tried to persuade Westminster to protect Northern Ireland's industries, especially the linen industry, which was central to its economy. He was anxious not to provoke Westminster, given the precarious state of Northern Ireland's position. In April 1939, and again in May 1940 in the Second World War, he called for conscription to be introduced in the North (which the British government, fearing a backlash from nationalists, refused).[5] He also called for Churchill to invade the Irish Free State and install a Governor-General at Dublin.[6] Lady Londonderry confided to Sir Samuel Hoare, the Home Secretary until the outbreak of the war, that Craigavon had become "ga-ga"[7] but 69 years-old Craigavon was still prime minister when he died peacefully at his home at [1] Glencraig, County Down in 1940. He was buried on the Stormont Estate, and was succeeded as the Prime Minister of Northern Ireland by the Minister of Finance, The Rt. Hon. John Miller Andrews.

His wife, Cecil Mary Nowell Dering Tupper (Viscountess Craigavon; died 1960), whom he married on 22 March 1905 after a very brief courtship, was English, the daughter of Sir Daniel Tupper, assistant comptroller of the Lord Chamberlain's department of the king's household. They had twin sons and a daughter. A president of the Ulster Women's Unionist Council, she was created a Dame Commander of the Order of the British Empire in 1941.[citation needed]