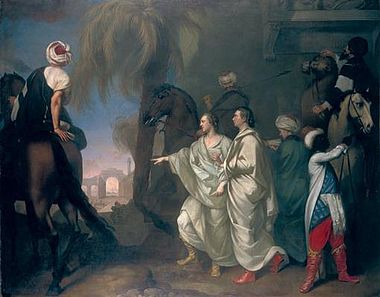 James Dawkins and Robert Wood Discovering the Ruins of Palmyra, by Gavin Hamilton (1758) - Hamilton portrays them and their Ottoman escort discovering the ruins as if it was a scene from classical history. Dawkins and Wood are in togas, and one of them is wearing the upper-class yellow boots otherwise reserved in the Ottoman Empire for Muslims

For other people of this name, see James Dawkins (disambiguation).

He was the eldest of four sons born to Henry Dawkins (1698–1744), who was also a wealthy sugar planter of Clarendon, Jamaica, and his wife, Elizabeth (1697?–1757, third daughter of Edward Pennant of Clarendon, chief justice of the island). He went to England for his education, attending Abingdon School (then headed by the Tory Thomas Woods) and matriculating at St John's College, Oxford on 7 December 1739 before graduating DCL in 1749. He then embarked on a continental Grand Tour to Paris then Rome, meeting more Jacobite sympathisers along with the experienced traveller Robert Wood. On 5 May 1750, Wood, Dawkins, Dawkins' Oxford friend John Bouverie and the Italian draughtsman Giovanni Borra set off from Naples in the Matilda to tour and study the Aegean, the coast of Asia Minor, Egypt, Nazareth, Syria (including the ruins of Palmyra and Baalbek), Tripoli and Cyprus, returning in Naples on 7 June 1751. Borra, Wood and Dawkins returned to England, where Dawkins funded Wood's publication of as well as that of James Stuart and Nicholas Revett's The Antiquities of Athens (it was on Stuart's suggestion that, in 1755, Dawkins was elected to the Society of Dilettanti).

In May 1753 Dawkins travelled to Berlin to meet Frederick the Great, in an inconclusive attempt to gain his support for a Jacobite conspiracy by William King of Oxford, the earl of Westmorland, and the Prussian ambassador Earl Marischal. The British government issued a warrant for Dawkins's arrest in retaliation, but it was not put into effect when he returned to England in 1754. Once back, he bought an estate in Laverstoke and was elected MP for the open borough of Hindon. He also owned, with his brother, the 25,000-acre (100 km2) Sutton's Plantation in Jamaica.

The anonymous 1756 pamphlet, Reflections physical and moral upon the ... numerous phenomena ... which have happened from the earthquake at Lima, attributed to Dawkins, shows his philosophy to have been opposed to that of Descartes and Isaac Newton. On his death in Jamaica in 1757, unmarried, he was buried in Old Plantation, Clarendon before he and his parents' remains were reburied in St Paul's Church, Chapelton, Jamaica when the family estates were sold in 1922.