The eldest son of James Drummond, 3rd Earl of Perth by his spouse Lady Anne, daughter of George Gordon, 2nd Marquess of Huntly, he was educated at the University of St Andrews, and succeeded his father 2 June, and was served heir to him 1 October 1675.

In 1678 he was appointed a member of the Scottish Privy Council and supported Lauderdale's policy of giving up the disaffected western shires of Scotland to highland raids, before joining Hamilton's faction. He was appointed Lord Justice General in 1682 and an Extraordinary Lord of Session on 16 November the same year. He introduced the use of the thumbscrew in Scotland. He was also Lord Chancellor of Scotland, 1684 - 1688.

He was a partner with William Penn in the settlement of East New Jersey in 1681. As one of 24 proprietors of a large parcel of property that took up much of what is now the State of New Jersey, Perth sponsored an expedition in 1684 to establish a settlement there. The City of Perth Amboy, New Jersey, which sits on the waterfront facing Staten Island, New York, and which was once a port city in its own right, is named in his honor — a statue of Lord Perth stands in front of City Hall (the "Amboy" comes from an Algonquian word meaning "valley").

In 1685 the 4th Earl of Perth converted to Roman Catholicism, along with his brother, the 1st Earl of Melfort. In 1686, Perth and his brother opened a Catholic chapel in Edinburgh, and their public attendance there resulted in a riot. Perth and his brother suggested to King James II that the Scottish Parliament would approve a repeal of the Test Act and penal laws against Catholics and Protestant dissenters, but this was later proved untrue. On 29 May 1687, nonetheless, he was made a Knight of the Thistle, being one of the eight original knights of that Order.

He is said to have had a novodamus, 17 December 1687, (on resignation) of his dignities, creating him Earl of Perth, Lord Drummond, Stobhall, and Montefex (Scotland), with remainder, failing heirs-male of his and of his brother's body, to the heirs-male of the second Earl.

Upon the Glorious Revolution, the Earl of Perth was imprisoned in 1689, first at Kirkaldy, then in Stirling Castle, and not released until 4 August 1693 on condition of a bond to leave the kingdom under penalty of £5000. 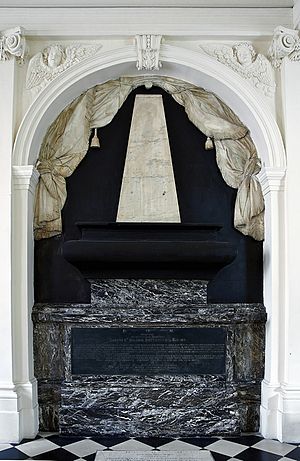 Monument for the brain of king James II & VII in Paris

He joined the exiled King at St Germain, by whom he was, on 19 August 1696, appointed Governor to the young Prince of Wales, and by whose testamentary directions he was, before 17 October 1701, created by King James III and VIII, Duke of Perth, Marquess of Drummond, Earl of Stobhall, Viscount Cargill, and Baron Concraig, all proclaimed as in the Peerage of Scotland (but in reality in the Jacobite peerage), with remainder to his heirs-male whatsoever. In 1701 he was recognised as a Duke in France by King Louis XIV.

On 14 February 1703, he was made a Gentleman of the Bedchamber, and on 21 June 1706 he was appointed a Knight of the Garter. He was afterwards Chamberlain to Queen Mary of Modena, and is said to have been created a Knight of the Golden Fleece by the King of Spain.

During James's exile, the Duke of Perth acted as the his ambassador to Rome, and after the King's death, Perth erected a monument to him in Paris.

The Duke of Perth married:

He died at St Germain, was interred in the Scots Chapel, Paris, and was succeeded by his son and heir by his first wife: