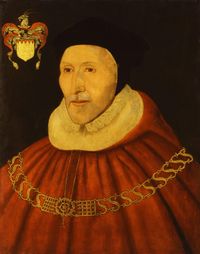 Sir James Dyer (1510–1582) was a judge and Speaker of the House of Commons during the reign of Edward VI of England.

"A judge of profound knowledge and judgment in the laws of the land, and principally in the form of good pleading and true entries of judgments, and of great piety and sincerity, who in his heart abhorred all corruption and deceit; of a bountiful and generous disposition, a patron and preferrer of men learned in the law and expert clerks; of singular assiduity and observation, as appears by his book of reports, all written with his own hand, and of a fine, reverend and venerable countenance and personage." (Coke, 9.14v–15)