James Earl Ray (March 10, 1928 – April 23, 1998) was an American claimed to have been responsible for the assassination of civil rights leader Martin Luther King, Jr, which he was convicted of. Ray was convicted on his 41st birthday after entering a guilty plea to forgo a jury trial. Had he been found guilty by jury trial, he would have been eligible for the death penalty.[3] He was sentenced to 99 years in prison. He later recanted his confession and tried unsuccessfully to gain access to a retrial. In 1998, Ray died in prison of complications due to chronic hepatitis C infection.

James Earl Ray was born to a poor family on March 10, 1928, in Alton, Illinois, the son of Lucille (Maher) and George Ellis Ray. He had Welsh, Scots, and Irish ancestry, and was raised Catholic.[4] In February 1935, Ray's father, known by the nickname Speedy, passed a bad check in Alton, Illinois, then moved to Ewing, Missouri, where the family had to change their name to Raynes to avoid law enforcement.[5] Ray left school at age fifteen. He joined the U.S. Army at the close of World War II and served in Germany.

His first conviction for criminal activity, a burglary in California, came in 1949. In 1952 he served two years for armed robbery of a taxi driver in Illinois. In 1955, he was convicted of mail fraud after stealing money orders in Hannibal, Missouri, and then forging them to take a trip to Florida. He served three years at Leavenworth Federal Penitentiary. In 1959 he was caught stealing $120 (equivalent to $1,000 in 2019) in an armed robbery of a St. Louis Kroger store.[6] Ray was sentenced to twenty years in prison for repeated offenses. He escaped from the Missouri State Penitentiary in 1967 by hiding in a truck transporting bread from the prison bakery.[7]

Following his escape, Ray stayed on the move throughout the United States and Canada, going first to St. Louis and then on to Chicago, Toronto, Montreal, and Birmingham. When he got to Alabama, Ray stayed long enough to buy a 1966 Ford Mustang and get an Alabama driver's license. He then drove to Mexico, stopping in Acapulco before settling down in Puerto Vallarta on October 19, 1967.[8] While in Mexico, Ray, using the alias Eric Starvo Galt, attempted to establish himself as a pornography director. Using mail-ordered equipment, he filmed and photographed local prostitutes. Frustrated with his results and jilted by the prostitute he had formed a relationship with, Ray left Mexico around November 16, 1967.[9]

Ray returned to the United States, arriving in Los Angeles on November 19, 1967. While in L.A., Ray attended a local bartending school and took dance lessons.[10] His chief interest, however, was the George Wallace presidential campaign. Ray harbored a strong prejudice against black people and was quickly drawn to Wallace's segregationist platform. He spent much of his time in Los Angeles volunteering at the Wallace campaign headquarters in North Hollywood.[11] He also considered emigrating to Rhodesia (now Zimbabwe), where a white minority régime had unilaterally assumed independence from the United Kingdom in 1965.[12] The notion of residing in Rhodesia continued appealing to Ray for several years afterward, and it would be his intended destination after King's assassination.[13]

Arriving in Atlanta on March 24, 1968, Ray checked into a rooming house.[16] He eventually bought a map of the city. FBI agents later found this map when they searched the room in which he was staying in Atlanta. On the map, the locations of the church and residence of Martin Luther King Jr. were circled.[17]

Ray was soon on the road again, and drove his Mustang to Birmingham, Alabama. There, on March 30, 1968, he bought a Remington Model 760 Gamemaster .30-06-caliber rifle and a box of 20 cartridges from the Aeromarine Supply Company. He also bought a Redfield 2x-7x scope, which he had mounted to the rifle.[18] He told the store clerks that he was going on a hunting trip with his brother. Ray had continued using the Galt alias after his stint in Mexico, but when he made this purchase, he gave his name as Harvey Lowmeyer.[19]

After buying the rifle and accessories, Ray drove back to Atlanta. An avid newspaper reader, Ray passed his time reading the Atlanta Constitution. The paper reported King's planned return trip to Memphis, Tennessee, which was scheduled for April 1, 1968. On April 2, 1968, Ray packed a bag and drove to Memphis.[20] 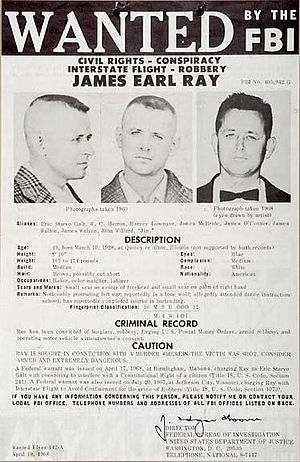 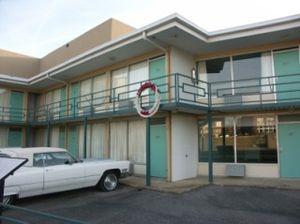 The Lorraine Motel, now known as the National Civil Rights Museum, where King was assassinated

Martin Luther King was fatally wounded by a single rifle bullet on April 4, 1968, while standing on the second-floor balcony of the Lorraine Motel in Memphis, Tennessee. Shortly after the shot was fired, witnesses saw a man believed to be James Earl Ray fleeing from a rooming house across the street from the Lorraine Motel. Ray had been renting a room in the house at the time. A package was dumped close to the site that included a rifle and a binocular, both found with Ray's fingerprints.

On the day of the assassination, Ray fled north by car from Memphis to Canada, arriving in Toronto, Ontario three days later, where he hid out for over a month and acquired a Canadian passport under the false name of Ramon George Sneyd. He left Toronto in late May on a flight to England.[21] On June 8, 1968, a little more than two months after King's death, Ray was arrested at London's Heathrow Airport while trying to leave the United Kingdom on the false Canadian passport. At check-in, the ticket agent noticed the name on his passport—Sneyd—was on a Royal Canadian Mounted Police watchlist.[22] At the airport, officials noticed that Ray carried another passport under a second name. The UK quickly extradited Ray to Tennessee, where he was charged with King's murder. He confessed to the crime on March 10, 1969, his 41st birthday,[23] and after pleading guilty he was sentenced to 99 years in prison.[24]

Three days later, he recanted his confession. Ray had entered a guilty plea on the advice of his attorney, Percy Foreman, in order to avoid a potential trial and conviction, which could have led to a sentence of death. The method of execution in Tennessee at the time was electrocution.

Ray fired Foreman as his attorney, and derisively called him "Percy Fourflusher" thereafter.[citation needed] Ray began claiming that a man he had met in Montreal back in 1967, who used the alias "Raul," had been deeply involved. Instead he asserted that he did not "personally shoot Dr. King," but may have been "partially responsible without knowing it," hinting at a conspiracy. Ray told this version of King's assassination and his own flight in the two months afterwards to William Bradford Huie. Huie investigated this story and discovered that Ray lied about some details. Ray told Huie that he purposefully left the rifle with his fingerprints on it in plain sight because he wanted to become a famous criminal. Ray was convinced that he would not be caught because he was so smart.[3] Ray believed that Governor of Alabama George Wallace would soon be elected President, and that he would only be confined for a short time.[3] Ray spent the remainder of his life unsuccessfully attempting to withdraw his guilty plea and secure a trial.

On June 11, 1977, Ray made his second appearance on the FBI Most Wanted Fugitives list, this time as the 351st entry. He and six other convicts had escaped from Brushy Mountain State Penitentiary in Petros, Tennessee, on June 10. They were recaptured on June 13 and returned to prison.[25] A year was added to Ray's previous sentence, totaling it to 100 years.

Ray had hired Jack Kershaw as his attorney, who promoted Ray's claim that he was not responsible for the shooting, which was said to have been the result of a conspiracy of the otherwise unidentified man named "Raul". Kershaw and his client met with representatives of the United States House Select Committee on Assassinations and convinced the committee to conduct ballistics tests—which ultimately proved inconclusive—that they felt would show that Ray had not fired the fatal shot.[26] Kershaw claimed that the escape was additional proof that Ray had been involved in a conspiracy that had provided him with the outside assistance he would have needed to break out of jail. Kershaw convinced Ray to take a polygraph test as part of an interview with Playboy. The magazine said that the test results showed "that Ray did, in fact, kill Martin Luther King Jr. and that he did so alone." Ray fired Kershaw after discovering that the attorney had been paid $11,000 by the magazine in exchange for the interview and hired conspiracy theorist Mark Lane to provide him with legal representation.[26]

In 1997, King's son Dexter met with Ray, asking him, "I just want to ask you, for the record, um, did you kill my father?" Ray replied, "No-no I didn't," and King told Ray that he, along with the King family, believed him; the King family also urged that Ray be granted a new trial.[27][28][29] Loyd Jowers, a restaurant owner in Memphis, was brought to civil court and sued for being part of a conspiracy to murder Martin Luther King. Jowers was found legally liable, and the King family accepted $100 in restitution, an amount chosen to show that they were not pursuing the case for financial gain.

Dr. William Pepper, a friend of King in the last year of his life, represented Ray in a televised mock trial in an attempt to grant him the trial he never received. Pepper later represented the King family in a wrongful death civil trial against Loyd Jowers. The King family has since concluded that Ray did not have anything to do with the murder of Martin Luther King, Jr.[30]

Prior to his death, Ray was transferred to the Lois M. DeBerry Special Needs Facility in Nashville, a maximum security prison with hospital facilities.[31] Ray died at the Columbia Nashville Memorial Hospital in Nashville on April 23, 1998, at the age of 70, from complications related to kidney disease and liver failure caused by hepatitis C.[32] Ray was survived by seven siblings. His brother Jerry Ray told CNN that his brother did not want to be buried or have his final resting place in the United States because of "the way the government has treated him." Ray was cremated and his ashes were flown to Ireland, the home of his family's ancestors.[33] Ten years later, Ray's other brother, John Larry Ray, co-authored a book with Lyndon Barsten, titled Truth At Last: The Untold Story Behind James Earl Ray and the Assassination of Martin Luther King Jr. revealing what the former author knew about the assassination.[27]