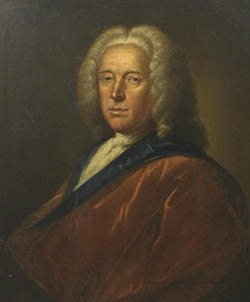 James Erskine, Lord Grange (1679 – 20 January 1754) was a Scottish advocate, judge and politician. He served as Lord Justice Clerk and a Lord of Justiciary.

The son of Charles Erskine, Earl of Mar, by his spouse Lady Mary, eldest daughter of George Maule, 2nd Earl of Panmure, he was also brother of John Erskine, 6th Earl of Mar. Educated as an advocate, he was raised to the bench on 18 October 1706. He was nominated a Lord of Justiciary in place of Lord Crocerig on 6 June the same year, and took the title Lord Grange. On 27 July 1710 he succeeded Adam Cockburn of Ormiston as Lord Justice Clerk.

He took no part in the rising of 1715, although there is little doubt that at times he was in communication with the Jacobites; but was rather known for his piety and for his sympathy with the Presbyterians.

In 1724 he, and David Erskine, Lord Dun purchased the forfeited Earldom of Mar from the government, which they promptly reorganised,[1] and sold off.

He is more famous, however, owing to the story of his wife's disappearance. This lady, Rachel Chiesley, was a woman of disordered intellect; probably with reason she suspected her husband of infidelity, and after some years of unhappiness Grange arranged a plan for her seizure.

In January 1732 she was conveyed with great secrecy from Edinburgh to the Monach Islands for two years, thence Hirta in St Kilda, where she remained for about ten years, thence she was taken to Assynt in Sutherland, and finally to Skye. To complete the idea that she was dead her funeral was publicly celebrated, but she survived until May 1745.

Meanwhile, in 1734 Grange resigned his offices in the Court of Session and Justiciary, and became a Member of Parliament where he was a bitter opponent of Sir Robert Walpole. His objective of being appointed Secretary of State for Scotland was a failure. For a short time after leaving parliament he returned to the Bar.