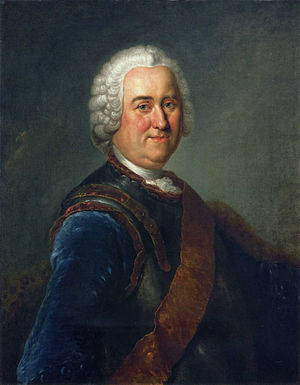 James Keith was a Scottish mercenary in the service of Russia and Prussia.

The Hon. James Francis Edward Keith (11 June 1696 – 14 October 1758) was a Scottish soldier and Prussian field marshal. As a Jacobite he took part in a failed attempt to restore the Stuart Monarchy to Britain, before joining the Spanish and Russian armies. He ultimately served in the Prussian army under Frederick the Great where he distinguished himself. He died during the Seven Years' War at the Battle of Hochkirk.

He was born at Inverugie Castle near Peterhead, the second son of William, 9th Earl Marischal of Scotland. Through his careful education under the historian Robert Keith, and subsequently at the University of Aberdeen in preparation for the legal profession, he acquired that taste for literature which secured him the esteem of the most distinguished savants of Europe.

But at an early period his preference for a soldier's career was clear. The Jacobite rising of 1715, in which he displayed qualities hinting of his future eminence, compelled him to seek safety on the Continent (Nihtinen 1998).

After spending two years in Paris, chiefly at the university, he took part in abortive risings in 1719 in support of James Stuart, son of the deposed King James VII and pretender to the Scottish throne.[1]

He then passed some time at Paris and Madrid in obscurity and poverty, but eventually obtained a colonelcy in the Spanish army, and, it is said, took part in the Siege of Gibraltar (1726-1727).

Finding his Protestantism a barrier to promotion, he obtained from the King of Spain a recommendation to Peter II of Russia, from whom he received (1728) the command of a regiment of the guards. He displayed in numerous campaigns the calm, intelligent and watchful valour which was his chief characteristic, obtaining the rank of general of infantry and the reputation of being one of the ablest officers in Russian service as well as a capable and liberal civil administrator. He was also one of the first Freemasons active in Russia.[2]

In the Russo-Swedish War (1741–1743), Keith was briefly de facto Vice-Roy of Finland, where he met the love of his life, a prisoner of war[citation needed] many years his junior named Eva Merthen.[1][3]

Judging, however, that his rewards were not commensurate with his merits, he offered his services to Frederick II of Prussia in 1747, who at once gave him the rank of field marshal, made him governor of Berlin in 1749, and soon came to cherish towards him, as towards his brother, the 10th Earl Marischal, a strong personal regard.

In 1756, the Seven Years' War broke out. Keith was employed in high command from the outset, and added to his Russian reputation on every occasion by resolution and promptitude of action, not less than by care and skill. In 1756, he commanded the troops covering the investment of Pirna, and distinguished himself at Lobositz. In 1757, he commanded at the siege of Prague and later in this same campaign he defended Leipzig against a greatly superior force. He was also present at Rossbach, and, while the king was fighting the campaign at Leuthen, conducted a foray into Bohemia.

In 1758, he took a prominent part in the unsuccessful Moravian campaign, after which he withdrew from the army to restore his broken health. He returned in time for the autumn campaign in the Lausitz, and was killed on 14 October 1758 at Hochkirch. His body was honourably buried on the field by Marshal Daun and General Lacy, the son of his old commander in Russia. He was transferred shortly afterwards by Frederick to the garrison church of Berlin. Keith died unmarried, but had several children by his mistress, Eva Merthen, a Swedish prisoner captured by him in the Russo-Swedish War (1741–1743).[dubious – discuss]

Many memorials were erected to him by the king, Prince Henry, and others. In 1889, the 22nd Infantry Regiment (1st Upper Silesian) was named after him. Hochkirch plans to erect a stone tablet inscribed to Keith outside its church, to stand with others dedicated to the victims of Prussia's defeat by Austria on 14 October 1758.[1]

Keith is a main character in the novel With Frederick the Great by G. A. Henty, which follows the adventures of a fictional nephew of his.[4]