From Infogalactic: the planetary knowledge core
Jump to: navigation, search
This article is about the former Prince of Wales and Jacobite Pretender. For his half-brother, see James Stuart, Duke of Cambridge.

James Francis Edward, Prince of Wales (10 June 1688 – 1 January 1766), nicknamed the Old Pretender, was the son of the deposed James II of England and Ireland, VII of Scotland. As such, he claimed the English, Scottish and Irish thrones (as James III of England and Ireland and James VIII of Scotland) from the death of his father in 1701, when he was recognised as king of England, Scotland and Ireland by his cousin Louis XIV of France. Following his death in 1766, he was succeeded by his son Charles Edward Stuart in the Jacobite Succession. Had his father not been deposed, Great Britain would have had only two monarchs during his lifetime; his father and himself, but instead there were seven; his father, William III, Mary II, Anne, George I, George II and George III. Although the ruling Protestant Stuarts died out with his half-sister, Queen Anne, the last remaining Stuarts were James and his sons, and their endeavours to reclaim the throne while remaining devoted to their Catholic faith are remembered in history as Jacobitism.

Prince James Francis Edward was born 10 June 1688, at St. James's Palace. He was the son of King James II of England and Ireland (VII of Scotland), and his Roman Catholic second wife, Mary of Modena,[1] and as such was automatically Duke of Cornwall and Duke of Rothesay, among other titles.

The prince's birth was controversial, and coming five years after James's marriage, unanticipated on the part of a number of British Protestants, who had expected his daughter Mary, from his first marriage, to succeed her father. Mary and her younger sister Princess Anne, had been raised as Protestants.[2] As long as there was a possibility of one of them succeeding him, the king's opponents saw his rule as a temporary inconvenience. When people began to fear that James's second wife, Mary, would produce a Catholic son and heir, a movement grew to replace him with his elder daughter Princess Mary and his son-in-law/nephew, William of Orange.

When the young prince was born, rumours immediately began to spread that he was an impostor baby, smuggled into the royal birth chamber in a warming pan and that the true child of James and Mary was allegedly stillborn.[3] In an attempt to scotch this myth, James published the testimonies of over seventy witnesses to the birth.[4]

On 9 December, Mary of Modena, disguised as a laundress, took the infant James to France. Young James was brought up at the Palace of St. Germains.[1]

Struggle for the throne

On his father's death in 1701, James was recognised by King Louis XIV of France, as the rightful heir to the English and Scottish thrones.[1] Spain, the Papal States and Modena also recognized him as King James III of England and VIII of Scotland and refused to recognise William III, Mary II or Queen Anne as legitimate sovereigns. As a result of his claiming his father's lost thrones, James was attainted for treason in London on 2 March 1702, and his titles were forfeited under English law.[5]

Though delayed in France by an attack of measles, James attempted invasion (an episode in the Jacobite rising), trying to land at the Firth of Forth on 23 March 1708. The fleet of Admiral Sir George Byng intercepted the French ships, which combined with bad weather prevented a landing.[6]

James served for a time in the French army, as had done his father during the inter-regnum. Between August and September 1710 Queen Anne appointed a new Tory administration led by Robert Harley, who entered into a secret correspondence with de Torcy, the French Minister of Foreign Affairs, in which he claimed to desire James's restoration to the throne should James convert to Protestantism.[4] A year later however the British government pushed for James's expulsion from France as a precondition for a peace treaty with France. In accordance with the Treaty of Utrecht (1713), Harley and Lord Bolingbroke, the Secretary of State, colluded with the French in exiling James to the Duchy of Lorraine.[4]

Queen Anne became severely ill at Christmas 1713 and seemed close to death. In January 1714 she recovered but clearly had not much longer to live. Through de Torcy and his London agent, Abbé François Gaultier, Harley kept up the correspondence with James, and Bolingbroke had also entered into a separate correspondence with him. They both stated to James that his conversion to Protestantism would facilitate his restoration. However James, a devout Catholic, replied to Torcy: "I have chosen my own course, therefore it is for others to change their sentiments".[4] In March came James's refusal to convert, following which Harley and Bolingbroke reached the opinion that James's restoration as not feasible, though they maintained their correspondence with him.

As a result, in August 1714, James's second cousin, the Elector of Hanover, George of Hanover, a German-speaking Protestant became King of the recently created Kingdom of Great Britain as George I.[6]

In the following year Scottish Jacobites started "The 'Fifteen" Jacobite rising in Scotland, aimed at putting "James III and VIII" on the throne. On 22 December 1715, James reached Scotland after the Jacobite defeats at the Battle of Sheriffmuir (13 November 1715) and Preston. He landed at Peterhead and soon fell ill with fever, his illness made more severe by the icy Scottish winter. In January 1716 he set up court at Scone Palace, but learning of the approach of government forces, returned to France, sailing from Montrose on 5 February 1716. The abandonment of his rebel allies caused ill-feeling against him in Scotland;[6] nor was he welcomed on his return to France. His patron, Louis XIV, had died on 1 September 1715 and the French government found him a political embarrassment.

After the unsuccessful invasion of 1715 James lived at Avignon, then Papal territory. Pope Clement XI offered James the Palazzo Muti in Rome as his residence, which he accepted.[7] Pope Innocent XIII, like his predecessor, showed much support. Thanks to his friend Cardinal Filippo Antonio Gualterio, James was granted a life annuity of eight thousand Roman scudi. Such help enabled him to organise a Jacobite court at Rome, where although he lived in splendour he continued to suffer from fits of melancholy and depression. Further efforts to restore the Stuarts to the British throne were planned in 1719 and 1722, but came to nothing.[2] In exercise of his pretended position James purported to create titles of nobility, now referred to as Jacobite Peerages, for his English supporters and members of his court, which clearly were not recognised in England.

The Court in Exile became a popular stop for English travelers making a Grand Tour, regardless of political affiliation.[8] For many it functioned as an unofficial embassy. Those in need of medical attention preferred being treated by one of their own countrymen. In 1735 court physicians tended to Edmund Sheffield, 2nd Duke of Buckingham and Normanby and to James Boswell thirty years later.[9] The court wine steward operated a lucrative business in selling rare vintages to visitors. After the Bourbons seized Naples in 1734, an appropriate introduction was essential for anyone wishing entry to an important concert or salon.[citation needed]

James remained well treated in Rome until his death. He was allowed to hold Protestant services at court, and was given land where his Protestant subjects could receive a public burial.[9] Security was provided to discourage British spies.

Louise Adélaïde d'Orléans (Mademoiselle d'Orléans), daughter of Philippe II, Duke of Orléans, was at one time suggested as a wife for James Francis Edward Stuart, but nothing came of it.

On 3 September 1719, James Francis Edward Stuart married Maria Clementina Sobieska (1702–35), granddaughter of King John III Sobieski of Poland. The wedding was held in the chapel of the Episcopal Palace in Montefiascone (near Viterbo). By his wife he had two sons:

Following James's failure, attention turned to his son Charles,[citation needed] "the Young Pretender", whose rebellion of 1745 came much closer to success than his father's. With the failure of this second rebellion, however, the Stuart hopes of regaining the British throne were effectively destroyed. James and Charles later clashed repeatedly, and relations between them broke down completely when James played a role in the election of his son Henry as a Cardinal (the celibacy required meaning that Henry would not have any legitimate children and thus could not carry on the line of succession), infuriating Charles, who had not been consulted.

In 1759 the French government briefly considered a scheme to have James crowned King of Ireland, as part of their plans to invade Britain, but the offer was never formally made to James. Several separate plans also involved Charles being given control of a French-backed independent Ireland.

File:Tomb of Stuart in the Vatican.jpg
Tomb of James Francis Edward Stuart and his two sons in St. Peter's Basilica.

James died at Rome on 1 January 1766 in his home the Palazzo Muti,[2] and was buried in the crypt of St. Peter's Basilica in the Vatican City. His burial is marked by the Monument to the Royal Stuarts.

Following James's death the Pope refused to recognise the claim to the English throne of his eldest son Charles, and instead from 14 January 1766 finally accepted the Hanoverian dynasty as the legitimate rulers of Britain and Ireland. This decision led to a gradual relaxation and reform of the anti-Catholic "Penal laws" in Britain and Ireland. In 1792 the Papacy specifically referred to George III as the "King of Great Britain and Ireland", which elicited a protest from James's second son Henry, who was then the Jacobite claimant.[10] 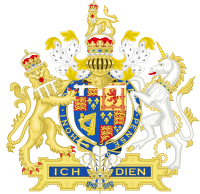 As Prince of Wales, James bore a coat of arms consisting of those of the kingdom, differenced by a label argent of three points.[12]

James was portrayed by Freddie Wilson in BBC serial The First Churchills.