Sir James George Frazer OM FRS FRSE FBA[1] (/ˈfreɪzər/; 1 January 1854 – 7 May 1941), was a Scottish social anthropologist influential in the early stages of the modern studies of mythology and comparative religion.[2] He is often considered one of the founding fathers of modern anthropology.

His most famous work, The Golden Bough (1890), documents and details the similarities among magical and religious beliefs around the globe. Frazer posited that human belief progressed through three stages: primitive magic, replaced by religion, in turn replaced by science.

Born in Glasgow, Scotland, Frazer attended school at Springfield Academy and Larchfield Academy in Helensburgh.[3] He studied at the University of Glasgow and Trinity College, Cambridge, where he graduated with honours in Classics (his dissertation was published years later as The Growth of Plato's Ideal Theory) and remained a Classics Fellow all his life.[4] From Trinity, he went on to study law at the Middle Temple, but never practised.

Four times elected to Trinity's Title Alpha Fellowship, he was associated with the college for most of his life, except for a year, 1907–1908, spent at the University of Liverpool. He was knighted in 1914, and a public lectureship in social anthropology at the universities of Cambridge, Oxford, Glasgow and Liverpool was established in his honour in 1921.[5] He was, if not blind, then severely visually impaired from 1930 on. He and his wife, Lily, died within a few hours of each other. They are buried at the Ascension Parish Burial Ground in Cambridge, England.

The study of myth and religion became his areas of expertise. Except for visits to Italy and Greece, Frazer was not widely travelled. His prime sources of data were ancient histories and questionnaires mailed to missionaries and imperial officials all over the globe. Frazer's interest in social anthropology was aroused by reading E. B. Tylor's Primitive Culture (1871) and encouraged by his friend, the biblical scholar William Robertson Smith, who was comparing elements of the Old Testament with early Hebrew folklore.

Frazer was the first scholar to describe in detail the relations between myths and rituals. His theories of totemism were superseded by the work of the French anthropologist, Claude Lévi-Strauss, who developed the concept of structuralism. His vision of the annual sacrifice of the Year-King has not been borne out by field studies. His generation's choice of Darwinian evolution as a social paradigm, interpreted by Frazer as three stages of human progress—magic giving rise to religion, then culminating in science—has not proved valid.[6][not in citation given] Yet The Golden Bough, his study of ancient cults, rites, and myths, including their parallels in early Christianity, is still studied by modern mythographers for its detailed information.[citation needed]

The first edition, in two volumes, was published in 1890. The third edition was finished in 1915 and ran to twelve volumes, with a supplemental thirteenth volume added in 1936. He published a single-volume abridged version, largely compiled by his wife Lady Frazer, in 1922, with some controversial material on Christianity excluded from the text.[7] The work's influence extended well beyond the conventional bounds of academia, inspiring the new work of psychologists and psychiatrists. Sigmund Freud cited Totemism and Exogamy frequently in his own Totem and Taboo: Resemblances Between the Psychic Lives of Savages and Neurotics.[8]

The symbolic cycle of life, death and rebirth which Frazer divined behind myths of many peoples captivated a generation of artists and poets. Perhaps the most notable product of this fascination is T. S. Eliot's poem The Waste Land (1922). Also Jim Morrison in his "Celebration of the Lizard" (finally titled "Not to Touch the Earth" as a song within the Waiting for the Sun album of 1968) included lyrics such as "not to touch the earth, not to see the sun"; sentences which serve as chapter titles in Frazer's work. More recently, Frazer's work influenced the ending of Francis Ford Coppola's film, Apocalypse Now (1979)[citation needed] (a copy of The Golden Bough is shown in one of the final shots).

Frazer's pioneering work[9] has been criticised by late 20th-century scholars. For instance, in the 1980s Edmund Leach wrote a series of critical articles, one of which was featured as the lead in Anthropology Today, vol. 1 (1985).[10] He criticised The Golden Bough for the breadth of comparisons drawn from widely separated cultures, but often based his comments on the abridged edition, which omits the supportive archaeological details. In a positive review of a book narrowly focused on the cultus in the Hittite city of Nerik, J. D. Hawkins remarked approvingly in 1973, "The whole work is very methodical and sticks closely to the fully quoted documentary evidence in a way that would have been unfamiliar to the late Sir James Frazer."[11]

Another important work by Frazer is his six-volume commentary on the Greek traveller Pausanias' description of Greece in the mid-2nd century AD. Since his time, archaeological excavations have added enormously to the knowledge of ancient Greece, but scholars still find much of value in his detailed historical and topographical discussions of different sites, and his eyewitness accounts of Greece at the end of the 19th century.[citation needed]

Frazer collected stories from throughout the British Empire and devised four general classifications into which many of them could be grouped:[12][13]

The Story of the Two Messengers

This type of story is common in Africa. Two messages are carried from the supreme being to mankind: one of eternal life and one of death. The messenger carrying the tidings of eternal life is delayed, and so the message of death is received first by mankind.[13]

Because of this, Bantu people, such as the Ngoni, punish lizards and chameleons. For example, children may be allowed to put tobacco into a chameleon's mouth so that the nicotine poisons it and the creature dies, writhing while turning colours.[13]

Variations of the tale are found in other parts of Africa. The Akamba say the messengers are the chameleon and the thrush while the Ashanti say they are the goat and the sheep.[13]

The Bura people of northern Nigeria say that, at first, neither death nor disease existed but, one day, a man became ill and died. The people sent a worm to ask the sky deity, Hyel, what they should do with him. The worm was told that the people should hang the corpse in the fork of a tree and throw mush at it until it came back to life. But a malicious lizard, Agadzagadza,[14] hurried ahead of the worm and told the people to dig a grave, wrap the corpse in cloth, and bury it. The people did this. When the worm arrived and said that they should dig up the corpse, place it in a tree, and throw mush at it, they were too lazy to do this, and so death remained on Earth.[15][16] This Bura story has the common mythic motif of a vital message which is diverted by a trickster.[17] 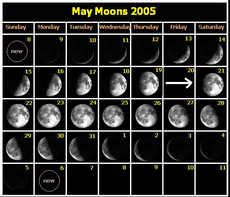 The phases of the moon

The Story of the Waxing and Waning Moon

The moon regularly seems to disappear and then return. This gave primitive peoples the idea that man should or might return from death in a similar way. Stories that associate the moon with the origin of death are found especially around the Pacific region. In Fiji, it is said that the moon suggested that mankind should return as he did. But the rat god, Ra Kalavo, would not permit this, insisting that men should die like rats. In Australia, the Wotjobaluk aborigines say that the moon used to revive the dead until an old man said that this should stop. The Cham have it that the goddess of good luck used to revive the dead, but the sky-god sent her to the moon so she could not do this any more.[13] 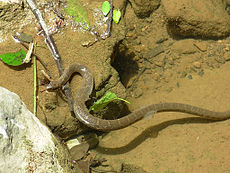 A snake shedding its skin

The Story of the Serpent and his Cast Skin

Animals which shed their skin, such as snakes and lizards, appeared to be immortal to primitive people. This led to stories in which mankind lost the ability to do this. For example, in Vietnam, it was said that the Jade Emperor sent word from heaven to mankind that, when they became old, they should shed their skins while the serpents would die and be buried. But some snakes overheard the command and threatened to bite the messenger unless he switched the message, so that man would die while snakes would be eternally renewed. For the natives of the island of Nias, the story was that the messenger who completed their creation failed to fast and ate bananas rather than crabs. If he had eaten the latter, then mankind would have shed their skins like crabs and so lived eternally.[13] 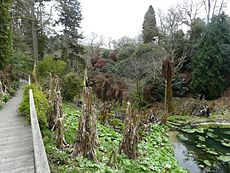 The Story of the Banana

The banana plant bears its fruit on a stalk which dies after bearing. This gave people such as the Nias islanders the idea that they had inherited this short-lived property of the banana rather than the immortality of the crab. The natives of Poso also based their myth on this property of the banana. Their story is that the creator in the sky would lower gifts to mankind on a rope and, one day, a stone was offered to the first couple. They refused the gift as they did not know what to do with it and so the creator took it back and lowered a banana. The couple ate this with relish, but the creator told them that they would live as the banana, perishing after having children rather than remaining everlasting like the stone.[13]