James Hannington (3 September 1847 – 29 October 1885) was an English Anglican missionary, saint and martyr. He was the first Anglican bishop of East Africa.

In the nineteenth century missionaries pushed through African jungles and deserts, learned local languages, and braved pestilential climates to create schools, hospitals, and churches. Some were killed, others contracted debilitating diseases, but by the century's end a global missionary presence was in place. Disease and martyrdom claimed great numbers.[1]

Hannington was born on 3 September 1847 at Hurstpierpoint in Sussex, England, about eight miles from Brighton, where his father ran a warehouse,[2] and was part of the family that ran Hannington's Department stores.[3] His father, Charles Smith Hannington, had recently acquired the property known as St. George’s, a pleasant mansion with its ample grounds. An adventurous child, at one point he blew off his thumb with black powder.[4] The boy was an eager collector, and his cases and cabinets increased in size and number. In these pursuits he was helped and encouraged by his mother—“the gentlest, sweetest, dearest mother that, ever lived”, as he once called her. Her understanding love was the greatest influence in the early life of the excitable, high-spirited and sometimes wayward boy.[5]

For James’s early education a tutor had been engaged, but when he was thirteen he was sent to the Temple School at Brighton, where he remained for the next two-and-a-half years. Despite the kindness and sympathy of a discerning headmaster, academic studies did not, at this stage, appeal to him.[5]

A poor scholar, he left school at fifteen to work in his father's Brighton counting house. The monotony was, however, broken by many a cruise in the family yacht and by extensive European travel. In addition to these activities he obtained a commission in the 1st Sussex Artillery Volunteers and rose to the rank of major.[2] He proved an excellent officer and, under his training and supervision, his detachment won more than one valuable prize at the annual camp competitions.[5]

In 1867 the chapel which his father had built in the grounds of his property was licensed for Anglican services.[6] At twenty-one, Hannington decided to pursue a clerical career, and entered university at St Mary Hall, Oxford, where he again proved to be a desultory student. He seems to have gone in for amusement rather than study, being President of the Red Club and captain of the St. Mary Hall Boat.[2] In 1872, the death of his mother spurred a change in Hannington's life; he was awarded his B.A., and on 1 March 1874 was ordained as a deacon, and took charge of the small parish of St Peter in Trentishoe, Devon.[7] In 1875 James became curate-in-charge at St George’s, Hurstpierpoint where he stayed until volunteering for missionary work in east Africa in 1882.[4] He had by then been married for five years.

Around 1882, Hannington heard of the murder of two missionaries on the shores of Lake Victoria. This led to him offering himself to the Church Missionary Society and he left England on 17 May, setting sail for Zanzibar on 29 June, as the head of a party of six missionaries. Crippled by fever and dysentery, Hannington was forced to return to England in 1883.[8]

In June 1884, having recovered, he was ordained bishop of Eastern Equatorial Africa, and in January 1885, at age thirty-seven, Hannington again departed for Africa. His diocese included missions of the CMS at the coast and inland in Buganda.[8] While there Hannington collected a number of shells which were described by E. A. Smith in two papers in the Annals and Magazine of Natural History.[2]

After arriving at Freretown, near Mombasa, Kenya he determined to pioneer a shorter and healthier highland road to Buganda, using Christian porters and undercutting the Arab slave route to the south. He was oblivious to the political consequences of traversing Busoga, a strategically sensitive area for the Buganda state. The sudden intrusion of German imperialism at the coast made the Bugandan ruler, Kabaka Mwanga, even more suspicious of Hannington's motives.[8] An oracle (emmandwa) had said that Buganda’s conqueror would come from the East. King Mwanga forbade Hannington from continuing through Busoga and sent him boats to take him to Sukumaland, but Hannington refused.[9] Together with his team, he safely reached a spot near Victoria Nyanza on 21 October, but his arrival had not gone unnoticed, and under the orders of King Mwanga II of Buganda, the missionaries were imprisoned in Busoga by Basoga chiefs. 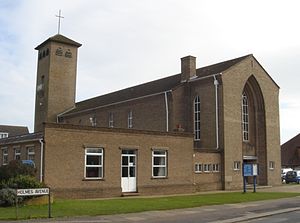 After eight days of captivity, by order from King Mwanga II, Hannington's porters were killed, and on 29 October 1885, Hannington himself was speared in both sides.[4] As he died, his alleged last words to the soldiers who killed him were: "Go, tell Mwanga I have purchased the road to Uganda with my blood."

Widespread persecution of Christians followed, many being killed or sold to Arab slavers.[1] Joseph Mukasa Balikuddembe, a Roman Catholic and an official at Mwanga's court, rebuked the king for the deed, and was beheaded for it. Hannington and his companions were among the first Martyrs of Uganda. Hannington's feast day in the Church of England is October 29. A dedication stone, erected in his memory along with the Bishop Hannington Memorial Church, Hove, England in 1938, bears the inscription "Thou hast turned my heaviness into joy".