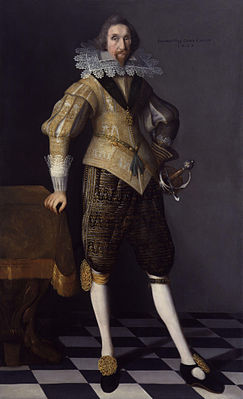 The Earl of Carlisle.

A Scot, he was the son of Sir James Hay of Fingask (a member of a younger branch of the Erroll family), and of Margaret Murray, cousin of George Hay, afterwards 1st Earl of Kinnoull.

He was knighted and taken into favour by James VI of Scotland, brought into England in 1603, treated as a "prime favourite" and made a gentleman of the bedchamber. In 1604, he was sent on a mission to France and pleaded for the Huguenots, which annoyed Henry IV of France and caused a substantial reduction of the present made to the English envoy. On 21 June 1606, he was created by patent a baron for life with precedence next to the barons, but without a place or voice in Parliament, no doubt to render his advancement less unpalatable to the English lords.

The king bestowed on him numerous grants, paid his debts, and secured for him a rich bride in the person of Honoria, only daughter and heir of Edward, Lord Denny. Their marriage was celebrated by Lord Hay's Masque, staged on 6 January 1607. In 1610 he was made a knight of the Order of the Bath, and in 1613 master of the wardrobe, while in 1615 he was created Lord Hay of Sawley, and took his seat in the House of Lords. At this time, his first wife Honora was buried 16 August 1614 at Waltham Abbey. He was sent to France next year to negotiate the marriage of Princess Christina with Prince Charles, and on his return, being now a widower, he was made a Privy Councillor, and in 1617 married Lady Lucy Percy (1599–1660), daughter of Henry Percy, 9th Earl of Northumberland (the famous "Wizard Earl"), by his wife Dorothy Devereux.

In 1618 he resigned the mastership of the wardrobe for a large sum in compensation. He was created Viscount Doncaster, and in February 1619 was despatched on a mission to Germany, where he identified himself with the cause of the Elector Palatine and urged James to make war in his support. In 1621 and 1622 he was sent to France to obtain peace for the Huguenots from Louis XIII, in which he was unsuccessful, and in September 1622 was created Earl of Carlisle.

Next year he went to Paris on the occasion of Prince Charles's journey to Madrid, and again in 1624 to join Henry Rich, afterwards Lord Holland, in negotiating the prince's marriage with Henrietta Maria, when he advised James without success to resist Richelieu's demands on the subject of religious toleration.

Carlisle became gentleman of the bedchamber to King Charles I after his accession. In 1628, after the failure of the expedition to Rhe, he was sent to make a diversion against Cardinal Richelieu in Lorraine and Piedmont; he counselled peace with Spain and the vigorous prosecution of the war with France, but on his return home found his advice neglected. He took no further part in public life, and died in March 1636.

Carlisle was a man of good sense and of accommodating temper, with some diplomatic ability. His extravagance and lavish expenditure, his double suppers and costly entertainments, were the theme of satirists and wonder of society, and his debts were said at his death to amount to more than £80,000. He left behind him, says Clarendon, a reputation of a very fine gentleman and a most accomplished courtier, and after having spent, in a very jovial life, above £400,000, which upon a strict computation he received from the crown, he left not a house or acre of land to be remembered by.

Hay by 1612 was a director of the Virginia Company.[1] He was a patentee and councillor of the plantation of New England, and showed great interest in the colonies.

Carlise also had an interest in the Caribbean. There James Ley, 1st Earl of Marlborough was a rival, who had to be bought off.[2] Another rival was the Earl of Montgomery.[3] On 2 July 1627 Carlisle obtained from the king a grant of all the Caribbean Islands, including Barbados, this being a confirmation of a former concession given by James I. A colonial plantation venture on Barbados was led in 1628 by Marmaduke Roydon, a prominent City of London merchant and one of Carlisle's major creditors.[4]

Hay's first wife was Honoria Denny. His second wife, Lucy Hay, Countess of Carlisle, was involved in many conspiracies, or allegations thereof, during the English Civil War.

The first earl was succeeded by James, his only surviving son by his first wife. James married Margaret Russell, third daughter of Francis Russell, 4th Earl of Bedford, but James died without issue on 30 October 1660. At his death, the peerage became extinct in the Hay family. The Hay Family currently spans across the world.