Sir James Hector KCMG (16 March 1834 – 6 November 1907) was a Scottish geologist, naturalist, and surgeon who accompanied the Palliser Expedition as a surgeon and geologist.[1] He went on to have a lengthy career as a government employed man of science in New Zealand, and during this period he dominated the Colony's scientific institutions in a way that no single man has since.

He was born in Edinburgh and attended the Edinburgh Academy. At 14, he began articles as an actuary at his father's office. He joined University of Edinburgh as a medical student and received his medical degree in 1856 at the age of 22.

Shortly after receiving his medical degree, upon the recommendation of Sir Roderick Murchison – director-general of the British Geological Survey – Hector was appointed geologist on the Palliser Expedition under the command of John Palliser. The goal of the Palliser expedition to British North America (now Canada) was to explore new railway routes for the Canadian Pacific Railway and to collect new species of plants. 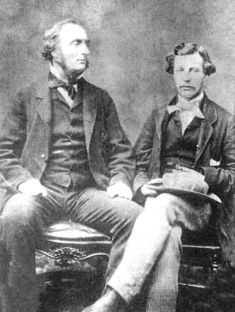 In 1858, when Palliser's expedition was exploring a mountain pass near the continental divide of the Canadian Rockies, one of Hector's packhorses fell into the river. As it was being pulled from the water, his own horse strayed and, when chasing after it, Hector records, he was kicked in the chest and knocked unconscious. He wrote in his diary of the expedition: "In attempting to recatch my own horse, which had strayed off while we were engaged with the one in the water, he kicked me in the chest". His companions, thinking him dead, dug a grave for him and prepared to put him in. His premature burial was cancelled when he regained consciousness. The pass and nearby river have been known since as Kicking Horse Pass and Kicking Horse River.[2]

The legend of the Kicking Horse is now firmly established in popular Canadian history. However, as politely noted by the Palliser scholar Irene Spry, it "embodies Hector's not always accurate reminiscences about the Expedition".[3] The only member of the Expedition who outlived Hector and who could verify what actually happened was the Métis Peter Erasmus, and his account does not support Hector's. According to Erasmus:

The doctor was knocked unconscious. We all leapt from our horses and rushed up to him, but all our attempts to help him recover his senses were of no avail. We then carried him to the shade of some big evergreens while we pitched camp. We were now in serious trouble, and unless Nimrod fetched in game our situation looked hopeless. One man stayed and watched the unconscious doctor. The rest of us took turns trying to catch trout that we could see in the clear mountain water of the river. Dr. Hector must have been unconscious for at least two hours when Sutherland yelled for us to come up; he was now conscious but in great pain. He asked for his kit and directed me to prepare some medicine that would ease the pain. I had him sign a document stating the facts of the accident in case his illness might prove serious. He readily agreed that it would be the proper thing to do.[4]

Hector was an ambitious man who wished to make his mark in Canadian history as the man who discovered the route of the national railway.

Following his return to Britain after the Palliser expedition, Hector again secured a paid scientific position with Roderick Murchison’s help. In 1862 he arrived in Dunedin in New Zealand to conduct a three-year geological survey of Otago. Hector travelled throughout the south of New Zealand's South Island to assess its potential for settlement and to record the location of useful minerals. He also assembled a staff of half a dozen men to assist with such tasks as fossil collecting, chemical analysis, and botanical and zoological taxonomy. As part of the survey, a Geological Map of Otago was created, known as Hector's Map.[5]

In 1865 Hector was appointed to found the Geological Survey of New Zealand, and he moved to Wellington to supervise the construction of the Colonial Museum, which was to be the Survey's headquarters. As the chief Government-employed scientist, Hector gave politicians advice on questions as diverse as exporting wool to Japan and improving fibre production from New Zealand flax. His political influence was underlined by his marriage in 1868 to Maria Georgiana Monro, daughter of the speaker of the House of Representatives.

Hector managed the Colony's premier scientific society – the New Zealand Institute – for thirty-five years, and from 1885 was Chancellor of the University of New Zealand. He controlled virtually every aspect of state-funded science. He had close and, at times, tense relationships with other men of science, in particular Julius von Haast. At the end of his career he was criticised for failing to acquire Māori artefacts for the Colonial Museum and for not adequately defending his departments from the Liberal Government's funding cuts. In 1902, for example, the ethnographer Elsdon Best wrote to Augustus Hamilton, the future director of the Colonial Museum, to state that Hector should be forced from office and that they should 'put a live man in his place'.

Hector retired in 1903, after four decades at the centre of organised science in New Zealand. In 1903 during a visit to Canada, he said of his mishap in Kicking Horse Pass, "When I regained consciousness, my grave was dug and they were preparing to put me in it. So that's how Kicking Horse got its name and how I came to have a grave in this part of the world."[2] He died in Lower Hutt, New Zealand, in 1907,[6] and was buried at Taitā Cemetery.[7]

Hector was elected a Fellow of the Royal Society in June 1866.[8] He was appointed a Companion of the Order of St Michael and St George in 1875 and promoted to Knight Commander of the same order in 1887.[6]

A number of things have been named after Hector, including:

A number of species and subspecies have been named after Hector, including: