From Infogalactic: the planetary knowledge core
Jump to: navigation, search
For other uses, see James Hepburn.

James Hepburn, 1st Duke of Orkney (c. 1534 – 14 April 1578), better known by his inherited title Earl of Bothwell, was a prominent Scottish nobleman in the 16th century, known for his association with and subsequent marriage to Mary, Queen of Scots, as her third and final husband.

He was the son of Patrick, Earl of Bothwell, and Agnes Sinclair (d. 1572), daughter of Henry, Lord Sinclair, and was styled The Master of Bothwell from birth. He succeeded his father as Earl of Bothwell and Lord Hailes in 1556.

As Lord High Admiral of Scotland, Bothwell sailed around Europe. During a visit to Copenhagen around 1559, he fell in love with Anna Tronds, known in English as Anna Throndsen and posthumously as Anna Rustung. She was a Norwegian noblewoman whose father, Kristoffer Trondson (Rustung), a famous Norwegian admiral, was serving as Danish Royal Consul. After their engagement, or more likely marriage under Norwegian law, Anna left with Bothwell. In Flanders, he said he was out of money and asked Anna to sell all her possessions. She complied and visited her family in Denmark to ask for more money. Anna was unhappy and apparently given to complaining about Bothwell. Bothwell's treatment of Anna played a part in his eventual downfall.

In February 1566 Bothwell married Jean Gordon, sister of Sir John Gordon and of George, Earl of Huntly.[1] They were divorced on 7 May 1567, citing his adultery with her servant as cause. He married Mary, Queen of Scots, eight days later.

Connection with Mary, Queen of Scots

Bothwell appears to have met Queen Mary when he visited the French Court in the autumn of 1560, after he left Anna Rustung in Flanders. He was kindly received by the Queen and her husband, King Francis II, and, as he himself put it: "The Queen recompensed me more liberally and honourably than I had deserved" — receiving 600 Crowns and the post and salary of gentleman of the French King's Chamber. He visited France again in the spring of 1561, and by 5 July was back in Paris for the third time — this time accompanied by the Bishop of Orkney and the Earl of Eglinton. By August, the widowed Queen was on her way back to Scotland in a French galley, some of the organisation having been dealt with by Bothwell in his naval capacity.

Under Mary of Guise's regency

Bothwell supported Mary of Guise, queen dowager and regent of Scotland, against the Protestant Lords of the Congregation. Bothwell and 24 followers took 6000 crowns of English money destined to be used against Guise from the Laird of Ormiston on Halloween 1559 at an ambush near Haddington. In retaliation the Protestant leader, the Duke of Châtelherault, sent his son the Earl of Arran and the Master of Maxwell to seize Bothwell's home Crichton Castle and force the Earl, who was at Borthwick, to join them. Bothwell remained true to the Regent, though it was said in January he was "weary of his part". The English agent Thomas Randolph also hinted at this time of a scandal involving his sister Jean Hepburn.[2]

At Mary, Queen of Scots' court

After Protestant Lords gained power following Mary of Guise's death and the return to Scotland of Mary, Queen of Scots, Bothwell appears to have been not much more than a troublesome noble at court. His open quarrel with the Earl of Arran and the Hamiltons, who accused him of intriguing against the Crown, caused some degree of anguish to the Queen, and although the Earl of Arran was eventually declared mad, Bothwell was nevertheless imprisoned in Edinburgh Castle without trial in 1562. Later that year, while the Queen was in the Highlands, he escaped and went to Hermitage Castle.[3]

The Queen and Bothwell were by now very close. When Bothwell married Lady Jean Gordon, daughter of the 4th Earl of Huntly, in February 1566, the Queen attended the wedding (the marriage lasted just over a year). In the following summer, upon hearing that he had been seriously wounded and was likely to die, she rode all the way through the hills and forests of the Borders to be with him at Hermitage Castle only a few weeks after giving birth to her son. However, historian Lady Antonia Fraser asserts that Queen Mary was already on her way to visit Bothwell on matters of state before she heard about his illness, and that therefore this visit is not evidence they were already lovers at the time of his accident. Author Alison Weir agrees, and in fact the records show that Mary waited a full six days after learning of his injuries before going to visit Bothwell. The story of her mad flight to his side was put about later by her enemies to discredit her.

The murder of Darnley

In February 1567, Bothwell was one of those accused of having murdered the Queen's consort Lord Darnley. Darnley's father, the Earl of Lennox, and other relatives agitated for vengeance and upon his petition, the Privy Council began proceedings against Bothwell on 12 April 1567. Sir William Drury reported to Sir William Cecil, Secretary of State to Elizabeth I of England, that the Queen was in continuous ill-health "for the most part either melancholy or sickly". On the appointed day Bothwell rode magnificently down the Canongate, with the Earl of Morton and Sir William Maitland of Lethington flanking him, and his Hepburns trotting behind. The trial lasted from noon till seven in the evening. Bothwell was acquitted and it was widely rumoured that he would marry Mary.

Marriage to Mary, Queen of Scots

The next Wednesday, the Queen rode to the Estates of Parliament, with Lord Bothwell carrying the Sceptre, where the proceedings of Bothwell's trial were officially declared to be just according to the law of the land. On Saturday 19 April, eight bishops, nine earls, and seven Lords of Parliament put their signatures to what became known as the Ainslie Tavern Bond, a manifesto declaring that Mary should marry a native-born subject, and handed it to Bothwell.

On Wednesday 24 April, while Mary was on the road from Linlithgow Palace to Edinburgh, Bothwell suddenly appeared with 800 men. He assured her that danger awaited her in Edinburgh, and told her that he proposed to take her to his castle at Dunbar, out of harm's way. She agreed to accompany him and arrived at Dunbar at midnight. There Mary was taken prisoner by Bothwell and allegedly raped by him to secure marriage to her and the crown (though whether she was his accomplice or his unwilling victim remains a controversial issue). On 12 May the Queen created him Duke of Orkney and Marquis of Fife, and on 15 May they were married in the Great Hall at Holyrood, according to Protestant rites officiated by Adam Bothwell, Bishop of Orkney.[4] Mary gave her new husband a fur lined night-gown.[5] Within three days, Sir William Drury wrote to London that although the manner of things appeared to be forcible, it was known to be otherwise.

The marriage divided the country into two camps, and on 16 June, the Lords opposed to Mary and the Duke of Orkney (as Bothwell had newly become) signed a Bond denouncing them. A showdown between the two opposing sides followed at Carberry Hill on 15 June 1567, from which Bothwell fled, after one final embrace, never to be seen again by Mary. In December that year, Bothwell's titles and estates were forfeited by Act of Parliament.

After fleeing Scotland at Carberry Hill, the Earl was arrested by Norwegians. Sources differ as to exactly how the Earl was arrested. The Norwegians brought him to Bergen, where Anna Throndsen lived, who either refused to or was unable to help him. The Earl was sent to Copenhagen, where the Danish King Frederik II deliberated on his fate. The Earl was sent across Øresund to the fortress and prison Malmøhus Castle. But as news from both England and Scotland arrived, the King eventually understood that Mary never again would become Queen of the Scots. And without Mary, the King considered him insignificant. Now the 4th Earl of Bothwell was sent to his final residence, Dragsholm Castle, some 40 kilometres west of Copenhagen. Possibly he had been considered to be insane and could hence not be released. He died in April 1578.[6]

Bothwell took ship from Aberdeen to Shetland. He was pursued by William Kirkcaldy of Grange and William Murray of Tullibardine who sailed into Bressay Sound near Lerwick. Four of Bothwell's ships in the Sound set sail north to Unst, where Bothwell was negotiating with German captains to hire more ships. Kirkcaldy's flagship, the Lion, chased one of Bothwell's ships, and both ships were damaged on a submerged rock.[7] Bothwell sent his treasure ship to Scalloway, and fought a three-hour-long sea battle off the Port of Unst, where the mast of one of Bothwell's ships was shot away. Then a storm forced him to sail towards Norway.[8]

Bothwell hoped to reach Denmark and raise an army with the support of Frederick II of Denmark to put Mary back on the throne. However, he was caught off the coast of Norway (then ruled by Denmark) without proper papers, and was escorted to the port of Bergen. This was the native home of Anna Throndsen. Anna raised a complaint against Bothwell, which was enforced by her powerful family; her cousin Erik Rosenkrantz, a high-level official in Norway, remanded Bothwell to the Bergenhus Fortress whilst Anna sued him for abandonment and return of her dowry. Anna may have had a soft spot for Bothwell, as he persuaded her to take custody of his ship, as compensation. Bothwell would have been released, but King Frederick had heard that the English Crown was seeking Bothwell for the alleged murder of Henry Stuart, Lord Darnley, the murdered second husband of Mary, Queen of Scots, and decided to take him into custody in Denmark.

Frederick at first treated Bothwell with respect, but later sent him to the notorious Dragsholm Castle, where he was held in what were said to be appalling conditions, and he was driven insane.[9] A pillar to which he was chained can still be seen, with a circular groove in the floor around the pillar where Bothwell purportedly remained for the last ten years of his life and where he died. His (alleged) mummified body could be seen in Fårevejle, in the church near the castle, until a few decades ago. However, the identity of the body has never been conclusively proven. 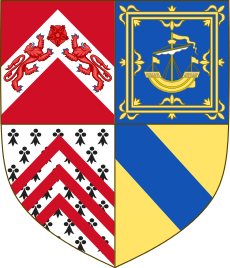