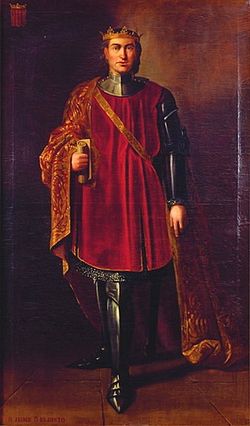 James II (10 August 1267 – 2 or 5 November 1327),[1][2] called the Just (the fair), (Catalan: Jaume el Just, Spanish: Jaime el Justo) was the King of Sicily (as James I) from 1285 to 1296 and King of Aragon and Valencia and Count of Barcelona from 1291 to 1327. In 1297 he was granted the Kingdom of Sardinia and Corsica. He used the Latin title Iacobus Dei gracia rex Aragonum, Valencie, Sardinie, et Corsice ac comes Barchinone. He was the second son of Peter III of Aragon and Constance of Sicily.

James was born at Valencia as the son of King Peter I and Queen Constance of Sicily.

He succeeded his father as King of Sicily in 1285. Upon the death of his brother Alfonso III in 1291, he succeeded also to the throne of the Crown of Aragon. He spent May of that year in Catania, inspiring the local monk Atanasiu di Iaci to write the Vinuta di re Iapicu about his time there. By a peace treaty with Charles II of Anjou in 1296, he agreed to give up Sicily, but the Sicilians instead installed his brother Frederick on the throne.

Due to the fact that Frederick, would not withdraw from the island, Pope Boniface VIII asked James II, along with Charles II of Naples, to remove him. As an enticement to do this the Pope invested James II with the title to Sardinia and Corsica, as well as appointing him Papal Gonfalonier. Because of his inability to disguise his apathy on the matter, he returned to Aragon. Frederick reigned there until his death in 1337.[3]

By the Treaty of Anagni in 1295, he returned the Balearic Islands to his uncle James II of Majorca. Aragon retained control over the continental territories of the Majorca kingdom — Montpellier and Roussillon — throughout James's reign. In 1298, by the Treaty of Argilers, James of Majorca recognised the suzerainty of James of Aragon.

During the period that followed his return to Aragon, James II wanted to gain access to the Muslim world in the south, from which Castile restricted Aragon. In order to achieve this goal, and assisted by his Admiral Don Bernat de Sarrià, Baron of Polop, he formed an alliance with the enemies of the adolescent king of Castile, Ferdinand IV. James II wanted Murcia in order to give his kingdom access to Granada. The allied forces entered from all directions in 1296, where James II was victorious in capturing Murcia and holding it until 1304.

In 1313, James II granted administrative and political autonomy to the Aran Valley, the legal details of which are described in a Latin manuscript called the Querimonia. The devolution of power was a reward for the Aranese pledging allegiance to James II in a dispute with the kingdoms of France and Mallorca over control of the valley.[4]

James was involved in the 1321 leper scare. He ordered the arrest and torture of French lepers seeking shelter in his realm, and adopted harsher policy towards native lepers.

It was probably during his reign at Sicily (1285–1291) that James composed his only surviving piece of Occitan poetry, a religious dansa dedicated to the Virgin Mary, Mayre de Deu.[5] A contemporary, Arnau de Vilanova, wrote a verse-by-verse Latin commentary of the dansa in 1305. The metaphor James uses has been analysed by Alfred Jeanroy, who sees similarities in the Roman de Fauvel.

James begins by comparing the Church to a ship in a storm, poorly guided by its pilot (nauchier, i.e. the Pope):

The literary quality of the verses is neither astounding nor disappointing, but the song was clearly written at a moment when James was in conflict with the Papacy, perhaps with a propagandistic end, to prove his piety and fidelity to the Church if not the Papacy. The final verses ask Mary to protect him, the king, from sin:

— Isabella of Castile, Viscountess of Limoges, daughter of Sancho IV of Castile and his wife María de Molina. The wedding took place in the city of Soria, in 1 December 1291 when the bride was only 8 years old. The marriage, which was never consummated, was dissolved and annulled after Sancho's death in 1295, when James chose to change his alliances and take advantage of the turmoil inside Castile.

— Blanche of Anjou, daughter of his family's rival Charles II of Naples and Maria of Hungary. They married in the city of Villabertran, in 29 October or 1 November 1295. She bore him several children:

— Elisenda de Montcada, daughter of Pedro I de Montcada, Lord of Altona and Soses, and wife Gisela d'Abarca. They married in the city of Tarragona, in 25 December 1322. This marriage was childless, too, and, after the king's death, she entered the Poor Clares Monastery of Pedralbes as a nun, where she died on 19 June 1364.

In addition to his legitimate offspring, James had three natural children born with Sicilian women: