From Infogalactic: the planetary knowledge core
Jump to: navigation, search
This article is about the American jurist. For other uses, see James Kent (disambiguation). 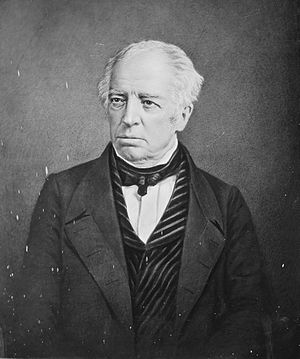 James Kent (July 31, 1763 in Fredericksburg,[1] then Dutchess, now Putnam County, New York – December 12, 1847 in New York City) was an American jurist and legal scholar.[2] He was the author of Commentaries on American Law.

He graduated from Yale College in 1781, having helped establish the Phi Beta Kappa Society there in 1780, and began to practice law at Poughkeepsie, New York in 1785 as an attorney, and in 1787 at the bar. In 1791 and 1792-93 Kent was a member from Dutchess County of the New York State Assembly. In 1793, he removed to New York City, where he was appointed a master in chancery for the city.

He was the first professor of law in Columbia College in 1793-98 and again served in the Assembly in 1796-97. In 1797, he was appointed Recorder of New York City and in 1798, a justice of the New York Supreme Court, in 1804 Chief Justice, and in 1814 Chancellor of New York. Kent was also elected a member of the American Antiquarian Society in 1814.[4] In 1821 he was a member of the New York State Constitutional Convention where he unsuccessfully opposed the raising of the property qualification for African American voters. Two years later, Chancellor Kent reached the constitutional age limit and retired from his office, but was re-elected to his former chair. He lived in retirement in Summit, New Jersey between 1837 and 1847 in a simple four-roomed cottage (the original cottage today has been incorporated into a large mansion at 50 Kent Place Boulevard in Summit NJ) which he referred to as 'my Summit Lodge', a name that has been offered as the derivation for the city's name.[5]

He has been long remembered for his Commentaries on American Law (four volumes, published 1826-1830), highly respected in England and America.[6] The Commentaries treated state, federal and international law, and the law of personal rights and of property, and went through six editions in Kent's lifetime.[7]

Kent rendered his most essential service to American jurisprudence while serving as chancellor. Chancery, or equity law, had been very unpopular during the colonial period, and had received little development, and no decisions had been published. His judgments of this class cover a wide range of topics, and are so thoroughly considered and developed as unquestionably to form the basis of American equity jurisprudence.

He married Elizabeth Bailey, and they had four children: Elizabeth (died in infancy), Elizabeth, Mary, and William Kent (1802–1861) who was a circuit judge and ran for Lieutenant Governor of New York with Washington Hunt in 1852.

His brother Moss Kent was a U.S. Representative.