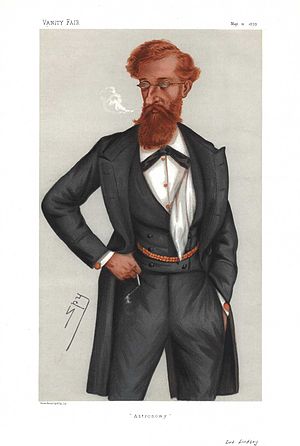 James Ludovic Lindsay, 26th Earl of Crawford and 9th Earl of Balcarres (28 July 1847 – 31 January 1913)[1][2] was a British astronomer, politician, bibliophile and philatelist. A member of the Royal Society, Crawford was elected president of the Royal Astronomical Society in 1878. He was a prominent Freemason.

The Earl was the son of Alexander the 25th Earl and his wife Margaret, born at St Germain in France.[3] He was asthmatic and spent considerable periods at sea studying the more portable sections of the family library which had been established by his father.[Note 1]

Crawford was interested in astronomy from an early age. Along with his father, he built up a private observatory at Dun Echt, Aberdeenshire. He employed David Gill (astronomer) to equip the observatory, using the best available technology. Among his achievements, Gill later made the first photograph of the Great Comet of 1882,[4] pioneering astrophotography and the mapping of the heavens. Crawford mounted expeditions to Cadiz in 1870, to observe the eclipse of the sun; India in 1871, to observe the eclipse of the sun; and then to Mauritius in 1874, to observe the transit of Venus. On the latter two expeditions Crawford employed London photographer Henry Davis, who in 1876 was appointed Crawford's personal librarian.

Upon hearing of a threat to close down the Edinburgh Royal Observatory,[5] in 1888 Crawford made a donation of astronomical instruments and his books on mathematics and the physical sciences from the Bibliotheca Lindesiana in order that a new observatory could be founded.[6] Thanks to this donation, the new Royal Observatory, Edinburgh was opened on Blackford Hill in 1896.

As well as much astronomical equipment, Crawford's observatory included an extensive collection of rare books, part of the Bibliotheca Lindesiana at Haigh Hall, which his father and he had accumulated till it was one of the most impressive private collections in Britain at the time. 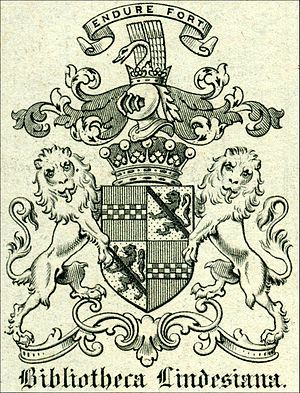 A book plate from the Bibliotheca Lindesiana

The Bibliotheca Lindesiana (i.e. Lindsayan or Lindsian library) had been planned by the 25th Earl and both he and his eldest son had been instrumental in building it up to such an extent that was one of the most impressive private collections in Britain at the time, both for its size and for the rarity of some of the materials it contained. Alexander William Lindsay had been a book collector from his schooldays and so he continued. In 1861 he wrote to his son James (then 14 years old) a letter which describes his vision of the Bibliotheca Lindesiana; in 1864 he redrafted and enlarged it while visiting his villa in Tuscany. By now it was 250 pages long and under the name of the "Library Report" it continued to be added to during their lifetimes. He based his plan on the Manuel of J.-Ch. Brunet[7] in which knowledge is divided into five branches: Theology, Jurisprudence, Science and Arts, Belles Lettres, History; to which Alexander added six of his own as paralipomena: Genealogy, Archaeology, Biography, Literary History, Bibliography and Encyclopaedias; and finally a Museum [8] Features of the collection included reacquired stock from earlier Lindsay collections, manuscripts both eastern and western, and printed books, all chosen for their intellectual and cultural importance.[9]

The bulk of the library was kept at Haigh Hall[10] in Lancashire with a part at Balcarres. The Earl issued an extensive catalogue of the library in 1910: Catalogue of the Printed Books Preserved at Haigh Hall, Wigan, 4 vols. folio, Aberdeen University Press, printers. Companion volumes to the catalogue record the royal proclamations and philatelic literature. The cataloguing and organisation of the library was a major task for a team of librarians led by J. P. Edmond. The manuscript collections (including Chinese and Japanese printed books) were sold in 1901 to Enriqueta Augustina Rylands for the John Rylands Library. Other parts of the collections have since been donated to or deposited in national or university libraries, including the National Library of Scotland. In 1946 the deposited collections were distributed to the British Museum, Cambridge University Library, and the John Rylands Library.[11] Changes to these locations were made by later Earls of Crawford; apart from the Crawford family muniments those at the John Rylands Library were removed in 1988.

Crawford formed notable collections of the stamps of the Italian States, the United States and Great Britain. The Crawford Medal was established by the Royal Philatelic Society London in Crawford's honour for distinguished contributions to philately. It is awarded annually for "the most valuable and original contribution to the study and knowledge of philately published in book form during the two years preceding the award." The 26th Earl of Crawford by the time of his death in 1913 had amassed the greatest philatelic library of his time.[15] Crawford's name was included as one of the "Fathers of Philately" in 1921.

Crawford was elected as a Conservative Member of Parliament for Wigan in 1874, and held the seat until his elevation to the peerage in 1880.

He had a strong connection to Wigan, where he was chairman of the Free Library Authority and head of the Wigan Coal Company. In January 1900 he received the Freedom of the borough of Wigan.[16]

Crawford was a member of the Council of the Zoological Society of London from 1902.[17]