James Peter Hymers Mackay, Baron Mackay of Clashfern, KT, PC, QC (born 2 July 1927)[1] is a British advocate. He served as Dean of the Faculty of Advocates, Lord Advocate, and Lord Chancellor (1987–1997). He is an active member of the House of Lords.

Mackay was born in Edinburgh, the son of railway signalman James Mackay (who came from Claisfearn near Tarbet in Sutherland) and his wife Janet Hymers.[1] He won a scholarship to George Heriot's School,[2] and then studied mathematics and physics at the University of Edinburgh, receiving a joint MA in 1948.[1] He taught mathematics for two years at the University of St Andrews before moving to Trinity College, Cambridge on a scholarship, from which he obtained a BA in mathematics in 1952.[1]

He then returned to Edinburgh University where he studied law, receiving an LLB (with distinction) in 1955.[1]

In 1979, Mackay was appointed Lord Advocate, the senior law officer in Scotland, and was created a life peer as Baron Mackay of Clashfern, of Eddrachillis in the District of Sutherland, taking his territorial designation from his father's birthplace, a cottage beside Loch na Claise Fearna.[3] Although an eminent lawyer in his own right (and leader of the Scots bar), Mackay was not a member of the newly elected Conservative Party. Convention was that governments appointed as Lord Advocate a QC of their own party. At the time the only eligible Conservative Scottish QC was Nicholas Fairbairn, a colourful and sometimes controversial figure. At the suggestion of Lord Emslie, Lord President of the Court of Session, incoming Prime Minister Margaret Thatcher appointed Mackay Lord Advocate, with Fairbairn taking the second-ranking position of Solicitor-General for Scotland. Mackay joined the Conservative Party on taking up the office. 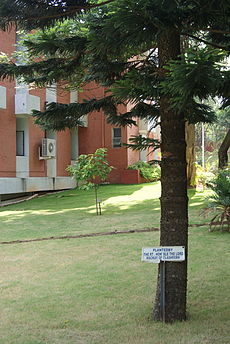 In anticipation of the retirement of Lord Fraser of Tullybelton as one of the two Scots Lords of Appeal in Ordinary, Mackay took an appointment as a judge of the Court of Session in 1984. He served until he was promoted to the appellate committee of the House of Lords in 1985 when Fraser stepped down.

In 1987 Margaret Thatcher made Mackay Lord Chancellor. When she resigned in 1990, it was Mackay who read the Cabinet's tribute to her at her last cabinet meeting.[citation needed] He was reappointed by Thatcher's successor John Major, serving until the 1997 general election. On his retirement he was one of the longest serving Lord Chancellors.

Since his retirement, Mackay has sat in the House of Lords and sits as Commissary to the University of Cambridge. He is the Editor-in-Chief of Halsbury's Laws of England, the major legal work which states the law of England, first published in 1907; the post is usually held by a former Lord Chancellor.[4] He is also a Senior Fellow of The Trinity Forum, a Christian nonprofit that supports the renewal of society through the development of leaders.

Mackay was raised a member of the Free Presbyterian Church of Scotland; as an adult he was an elder of the church.[1] The church enjoins its members from attending Roman Catholic religious services; nevertheless Mackay attended two Catholic funeral masses for members of the judiciary (for Charles Ritchie Russell in 1986,[3] and again for John Wheatley in 1988).[1] Following the second mass Mackay was called before a church synod where he denied that he had broken the church's prohibition of showing "support for the doctrine of Roman Catholicism", saying "I went there purely with the purpose of paying my respects to my dead colleagues."[5] The church suspended Mackay as an elder and withdrew his right to take Holy Communion.[1] The synod met again in Glasgow in 1989 to review the decision; the fractious meeting asked Mackay to undertake not to attend further Catholic services, but he announced "I have no intention of giving any such undertaking as that for which the synod has asked",[6] and later withdrew from the church. The dispute precipitated a schism, leading to the formation of the Associated Presbyterian Church. Mackay did not, however, join the new communion, but worships at both its parishes and those of the Church of Scotland.[3]

As a Presbyterian, Mackay was a firm believer in moderation. At a gathering for the Faculty of Advocates, Mackay had laid on a spread of tea and toast, complete with a tiny pot of honey. One of the lawyers in attendance contemplated the pot and remarked, "I see your Lordship keeps a bee."[7]

Mackay was Lord High Commissioner to the General Assembly of the Church of Scotland in 2005 and 2006.

Mackay is also the Honorary President of the Scottish Bible Society.[8] He supported the society's programme to send a bible to every court in Scotland[8] and wrote in support of "The Bible in Scots Law", a pamphlet it distributed to Scottish lawyers which described the Bible as a "foundational source book for Scotland's legal system".[9] He is a strict sabbatarian, refusing to work or travel on a Sunday, or even to give an interview if there is a chance it could be rebroadcast on the sabbath.[3]

Mackay was appointed a Knight of the Thistle by the Queen Elizabeth II in 1999. In 2007 that the Queen appointed Lord Mackay to the office of Lord Clerk Register, replacing David Charteris, 12th Earl of Wemyss.[10]

In 1989, Mackay was elected Honorary Fellow of Trinity College, Cambridge.[11]

At the University of Aberdeen, the main halls in the King's College Conference Centre is named the James Mackay Hall, in honour of him.[citation needed]

In 1994, he was awarded an Honorary Degree (Doctor of Laws) by the University of Bath.[12]