James Maitland Balfour (5 January 1820 – 23 February 1856), of Whittinghame, East Lothian, was a Scottish land-owner and businessman. He made a fortune in the 19th-century railway boom, and inherited a significant portion of his father's great wealth.

He was a Conservative Member of Parliament in the 1840s, and was the father of Prime Minister Arthur Balfour, 1st Earl of Balfour. 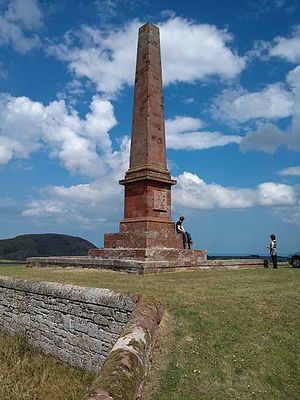 Balfour was the son of James Balfour (c.1775–1845) and his wife Lady Eleanor, daughter of James Maitland, 8th Earl of Lauderdale. He was educated at Eton and Trinity College, Cambridge.[1]

Balfour inherited his father's neo-classical mansion Whittingehame House and his Highland estate at Strathconan, as well as a house in Grosvenor Square, London.[2] He also inherited his father's business skills, and became a director of the North British Railway at the height of the railway mania, which earned him a fortune.[3]

He served as Member of Parliament for Haddington from 1841 until 1847 and was also Major Commandant of the East Lothian Yeomanry Cavalry, who erected the Balfour Monument in his honour overlooking Traprain Law, 2 1⁄2 miles (4.0 km) south west of East Linton in Scotland.