James McGill (October 6, 1744 – December 19, 1813) was a British businessman and philanthropist best known for being the founder of McGill University, Montreal. He was elected to the Legislative Assembly of Lower Canada for Montreal West in 1792 and was appointed to the Executive Council of Lower Canada in 1793. He was the first honorary Lieutenant-Colonel of The Canadian Grenadier Guards. He was also a prominent member of the Château Clique and one of the original founding members of the Beaver Club. His summer home stood within the Golden Square Mile.

The McGill family originated in Ayrshire, and had been living in Glasgow for two generations by the time James was born in the family home on Stockwell Street. The McGills were metalworkers, and, from 1715 onward, Burgesses of the city and members of the Hammermen's Guild, James' father having served as Deacon.[1]

James McGill was educated at the University of Glasgow, and soon afterwards left for North America to explore the business opportunities there. By 1766, he was in Montreal, whose trade opportunities had recently been laid open following the British Conquest of New France. He entered the fur trade south of the Great Lakes, at first as a clerk or agent for the Quebec merchant, William Grant of St. Roch.[2] By the next year, the firm of "James McGill & Co." was trading at Michilimackinac.[3]

In 1773, McGill joined with Isaac Todd (who would remain a close lifelong friend) in a trading venture beyond Grand Portage, which was renewed under the name Todd & McGill in 1776.[4] This partnership was important in the formation of what would become the North West Company. Todd & McGill prospered, as one of the main firms supplied by the London commission merchant, John Strettell. The partnership did not participate in the North West Company after 1783, but it continued in the so-called "Southwest trade" in the Mississippi valley until Michilimackinac was handed over to the Americans in 1796. It was also involved in other enterprises, but few business papers have survived, making a detailed account difficult.

In November of 1775, McGill was a member of the representation for the citizens of Montreal at the drafting of the articles of capitulation for the city to the invading American army.[5] McGill was elected to the Legislative Assembly of Lower Canada for Montreal West in 1792 and appointed to the Executive Council in 1793. He was elected again in 1800 and in Montreal East in 1804. He was the first honorary Lieutenant-Colonel of the regiment The Canadian Grenadier Guards, which name is marked upon the replicated cairn that stands before the Arts building of McGill University.

In 1776, James McGill married Marie-Charlotte (1747-1818), the widow of Joseph-Amable Trottier Desrivières (1732-1771). Educated at the Ursuline Convent, Quebec, she was the daughter of Guillaume Guillimin (1713-1750), Member of the Sovereign Council of New France and Judge of the Courts of Admiralty. Her mother, Marie-Geneviève Foucault, was the daughter of François Foucault (1690-1766), the owner of one of the largest seigneuries in New France and a member of the Sovereign Council. McGill had previously adopted Charlotte, the youngest daughter of his deceased friend John Porteous, and through his marriage (after the death of their uncle and legal guardian) he became the step-father of two sons,

In 1777, at Montreal, McGill purchased the former home of the Baron de Becancourt for his new family on Notre-Dame Street, next to the Château Ramezay.[8] In about 1797, he was said to have purchased the Burnside farm which he used as a summer home. Burnside neighboured a farm belonging to the Desrivières family to the east, and the McTavish estate to the north and west. A burn ran through the property, from which McGill gave it its name. The land was used for orchards, vegetable farming and cattle-grazing. In 1787, an elm took root in the upper meadow of Burnside which grew into the Founder's Elm and survived until 1976 when it became dangerous and had to be felled.

Burnside was a gentleman's farmhouse as opposed to a working farmhouse. The ground floor was taken up with servant's rooms, with a kitchen at the front and cellars going into the hill at the back. Steps led up to the front door and into the entrance hall with spacious front rooms on either side. Each of the two front rooms had three windows facing south. The high sloping roof had dormer windows for the third floor rooms, of which only two (each measuring twenty four square feet) had ceilings, while the rest of the area was a large open attic.[9] 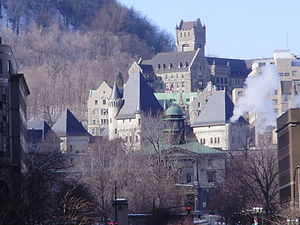 As a fur trader, slave owner and land owner, he further diversified his activities into land speculation and the timber trade. By 1810, he had abandoned the fur trade altogether. At his death, he was one of the richest men in Montreal, leaving an estate well in excess of £100,000. The executors of his will were all close personal friends: John Richardson, Bishop John Strachan, Chief Justice James Reid and James Dunlop.

McGill's major assets included real estate in Lower and Upper Canada and investments in Britain; the latter not specified as to character or amount. There were also extensive mortgage holdings. In his will, old friends were remembered, the Montreal poor, the Hôtel-Dieu de Montréal, the Grey Nuns, the Hôpital-Général de Québec and two Glasgow charities. Even though, Alexander Henry grumbled that, McGill's fortune, "went to strangers.. (and) his wife's children, Mrs McGill is left comfortable, but young Desrivieres (the son of McGill's youngest stepson) will have £60,000".[10]

McGill's most important legacy was the £10,000 and his summer home that he left to the Royal Institution for the Advancement of Learning. The bequest not only funded McGill University, but it also stretched to establish several others colleges and universities, including: the University of British Columbia, which was known as the McGill University College of British Columbia until 1915; the University of Victoria, an affiliated junior college of McGill until 1916; and, Dawson College which began in 1945 as a satellite campus of McGill to absorb the anticipated influx of students after World War II.

James McGill was buried, alongside his fur-trading associate, John Porteous, in the old Protestant "Dufferin Square Cemetery". When the cemetery was eradicated in 1875, his remains were reinterred in front of the Arts Building on the McGill University campus. Plaques are displayed on Stockwell Street, Glasgow commemorating his birthplace and his foundation of the university, and in the undercroft of Bute Hall at Glasgow University, recognizing the historic link between Glasgow and McGill universities.

McGill Primary School in Pollok, Glasgow, was named after James McGill. It is now closed.