James Ingram Merrill (March 3, 1926 – February 6, 1995) was an American poet whose awards include the Pulitzer Prize for Poetry (1977) for Divine Comedies (1976). His poetry falls into two distinct bodies of work: the polished and formalist lyric poetry of his early career, and the epic narrative of occult communication with spirits and angels, titled The Changing Light at Sandover (published in three volumes from 1976 to 1980), which dominated his later career. Although most of his published work was poetry, he also wrote essays, fiction, and plays.

James Ingram Merrill was born in New York City to Charles E. Merrill (1885-1956), the founding partner of the Merrill Lynch investment firm, and Hellen Ingram Merrill (1898-2000), a society reporter and publisher from Jacksonville, Florida.[1] He was born at a residence which would become the site of the Greenwich Village townhouse explosion, which Merrill would lament in the poem "18 West 11th Street" (1972).[2][3]

Merrill's parents married in 1925, the year before he was born; he would grow up with two older half siblings from his father's first marriage, Doris Merrill Magowan[4] and Charles E. Merrill, Jr.[1] As a boy, Merrill enjoyed a highly privileged upbringing in educational and economic terms. His father's 30-acre estate in Southampton, New York, for example, known as "The Orchard," had been designed by Stanford White with landscaping by Frederick Law Olmsted. (The property was developed in 1980 with 29 luxury condominiums flanking the central gardens, while the home's vast ballroom and first-floor public reception areas were preserved.)[1][5][6][7] Merrill's childhood governess taught him French and German, an experience Merrill wrote about in his 1974 poem "Lost in Translation." From 1936-1938, Merrill attended St. Bernard's, a prestigious New York grammar school.[1]

"I found it difficult to believe in the way my parents lived. They seemed so utterly taken up with engagements, obligations, ceremonies," Merrill would tell an interviewer in 1982.[8] "The excitement, the emotional quickening I felt in those years came usually through animals or nature, or through the servants in the house . . . whose lives seemed by contrast to make such perfect sense. The gardeners had their hands in the earth. The cook was dredging things with flour, making pies. My father was merely making money, while my mother wrote names on place-cards, planned menus, and did her needlepoint."[8] Merrill's parents separated when he was eleven, then divorced when he was thirteen.[1] As a teenager, Merrill boarded at the Lawrenceville School, where he befriended future novelist Frederick Buechner, began writing poetry, and undertook early literary collaborations.[1][9] When Merrill was 16 years old, his father collected his short stories and poems and published them as a surprise under the name Jim's Book. Initially pleased, Merrill would later regard the precocious book as an embarrassment. Today, it is considered a literary treasure worth thousands of dollars.[10]

Black on flat water past the jonquil lawns
Riding, the black swan draws
A private chaos warbling in its wake,
Assuming, like a fourth dimension, splendor
That calls the child with white ideas of swans
Nearer to that green lake
Where every paradox means wonder.

Merrill was drafted in 1944 into the United States Army and served for eight months. His studies interrupted by war and military service, Merrill returned to Amherst College in 1945 and graduated summa cum laude in 1947.[1] Merrill's, or "Jim" as he was known at Amherst, senior thesis on French Impressionist Marcel Proust heralded his literary talent, and his English professor upon reading it declared to the Amherst graduating class that Jim was "destined for some sort of greatness."[11] The Black Swan, a collection of poems Merrill's Amherst professor (and lover) Kimon Friar published privately in Athens, Greece in 1946, was printed in just one hundred copies when Merrill was 20 years old. Merrill's first mature work, The Black Swan is among Merrill's scarcest titles. Merrill's first commercially published volume was First Poems, issued in 990 numbered copies by Alfred A. Knopf in 1951. 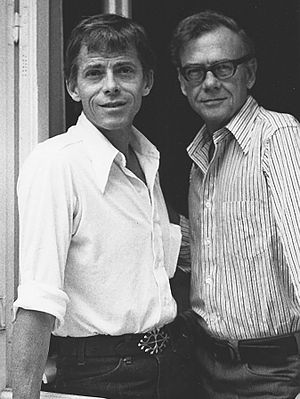 Merrill's partner of more than four decades was David Jackson, a writer and artist. Merrill and Jackson met in New York City after a performance of Merrill's play The Bait at the Comedy Club in 1953. (Poet Dylan Thomas and playwright Arthur Miller walked out of the performance.[12]) Together, Jackson and Merrill moved to Stonington, Connecticut in 1955, purchasing a property at 107 Water Street (now the site of writer-in-residency program, the James Merrill House, sponsored by the Stonington Village Improvement Association in Stonington Borough).[13][14] For most of two decades, the couple spent winters in Athens at their home at 44 Athinaion Efivon.[1][15] Greek themes, locales, and characters occupy a prominent position in Merrill's writing. In 1979, Merrill and Jackson largely abandoned Greece and began spending part of each year at Jackson's home in Key West, Florida. 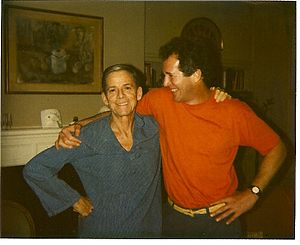 In his 1993 memoir A Different Person, Merrill revealed that he suffered writer's block early in his career and sought psychiatric help to overcome its effects (undergoing analysis with Dr. Thomas Detre in Rome). "Freedom to be oneself is all very well," he would write. "The greater freedom is not to be oneself."[16] Merrill painted a candid portrait in his memoir of gay life in the early 1950s, describing friendships and relationships with several men including Dutch poet Hans Lodeizen, Italian journalist Umberto Morra, U.S. writer Claude Fredericks, art dealer Robert Isaacson, David Jackson, and his partner from 1983 onward, actor Peter Hooten.

Cupid
You are one wild boy
For Time to tame, or me to,
Hand in glove with him.

A prodigious correspondent and the keeper of many confidences, Merrill's "chief pleasure was friendship".[7][17] Answering to "Jim" in his youth and to "James" in published adulthood (and to "JM" in letters from readers), he was called "Jimmy", a childhood nickname, by friends and family until the end of his life. Despite great personal wealth derived from an unbreakable trust made early in his childhood, Merrill lived modestly.[18] (Before his father's death, Merrill and his two siblings renounced any further inheritance from their father's estate in exchange for $100 "as full quittance";[19] as a result, most of Charles Merrill's estate was donated to charity, including "The Orchard.")

A philanthropist in his own right, Merrill created the Ingram Merrill Foundation in the 1950s, the name of which united his divorced parents. The private foundation operated throughout the poet's lifetime and subsidized literature, the arts, and public television, with grants directed particularly to writers and artists showing early promise.[7][17] Merrill met filmmaker Maya Deren in 1945 and the poet Elizabeth Bishop a few years later, giving critical financial assistance to both and providing funds to hundreds of other writers, often anonymously.[14][20][21]

Merrill served as a Chancellor of the Academy of American Poets from 1979 until his death. While wintering in Arizona, he died on February 6, 1995 from a heart attack related to AIDS.

Beginning with the prestigious Glascock Prize, awarded for "The Black Swan" when he was an undergraduate, Merrill would go on to receive every major poetry award in the United States, including the 1977 Pulitzer Prize for Poetry for Divine Comedies. Merrill was honored in mid-career with the Bollingen Prize in 1973. He would receive the National Book Critics Circle Award in 1983 for his epic poem The Changing Light at Sandover (composed partly of supposedly supernatural messages received via the use of a Ouija board). In 1990, he received the first Bobbitt National Prize for Poetry awarded by the Library of Congress for The Inner Room. He garnered the National Book Award for Poetry twice, in 1967 for Nights and Days[22] and in 1979 for Mirabell: Books of Number.[23] He was elected a Fellow of the American Academy of Arts and Sciences in 1978.[24]

But you were everywhere beside me, masked,
As who was not, in laughter, pain, and love. 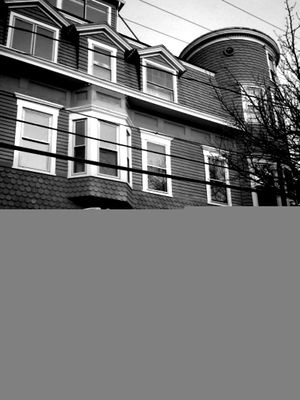 James Merrill House, 107 Water Street, Stonington Borough, Connecticut. The poet spent summers in an apartment on the top two floors from 1955-1995; the domed room at upper right was used for Ouija séances.

A writer of elegance and wit, highly adept at wordplay and puns, Merrill was a master of traditional poetic meter and form who also wrote a good deal of free and blank verse. (Asked once if he would prefer a more popular readership, Merrill replied "Think what one has to do to get a mass audience. I'd rather have one perfect reader. Why dynamite the pond in order to catch that single silver carp?"[25]) Though not generally considered a Confessionalist poet, James Merrill made frequent use of personal relationships to fuel his "chronicles of love & loss" (as the speaker in Mirabell called his work). The divorce of Merrill's parents — the sense of disruption, followed by a sense of seeing the world "doubled" or in two ways at once — figures prominently in the poet's verse. Merrill did not hesitate to alter small autobiographical details to improve a poem's logic, or to serve an environmental, aesthetic, or spiritual theme.

As Merrill matured, the polished and taut brilliance of his early work yielded to a more informal, relaxed, and conversational tone.[26][27] Already established in the 1970s among the finest poets of his generation, Merrill made a surprising detour when he began incorporating extensive occult messages into his work (although a poem from the 1950s, "Voices from the Other World," foreshadows the practice).[8][28] The result, a 560-page apocalyptic epic published as The Changing Light at Sandover (1982), documents two decades of messages dictated from otherworldly spirits during Ouija séances hosted by Merrill and his partner David Jackson. The Changing Light at Sandover is one of the longest epics in any language, and features the voices of recently deceased poet W. H. Auden, Merrill's late friends Maya Deren and Greek socialite Maria Mitsotáki, as well as heavenly beings including the Archangel Michael. Channeling voices through a Ouija board "made me think twice about the imagination," Merrill later explained. "If the spirits aren't external, how astonishing the mediums become! Victor Hugo said of his voices that they were like his own mental powers multiplied by five."[29] After years of Ouija board use and encouraging spirits to enter his body, before dying, Merrill recommended people must not use the Ouija board.[30]

Following the publication of The Changing Light at Sandover, Merrill returned to writing shorter poetry which could be both whimsical and nostalgic: "Self-Portrait in TYVEK Windbreaker" (for example) is a conceit inspired by a windbreaker jacket Merrill purchased from "one of those vaguely imbecile / Emporia catering to the collective unconscious / Of our time and place." The Tyvek windbreaker — "DuPont contributed the seeming-frail, / Unrippable stuff first used for Priority Mail" — is "white with a world map." "A zipper's hiss, and the Atlantic Ocean closes / Over my blood-red T-shirt from the Gap."[31]

from The Book of Ephraim:

Maya departs for city, cat, and lover.
The days grow shorter. Summer's over.

We take long walks among the flying leaves
And ponder turnings taken by our lives.

Look at each other closely, as friends will
On parting. This is not farewell,

Not now. Yet something in the sad
End-of-season light remains unsaid.

Since his death, Merrill's work has been anthologized in three divisions: Collected Poems, Collected Prose, and Collected Novels and Plays. Accordingly, his work below is divided upon those same lines.