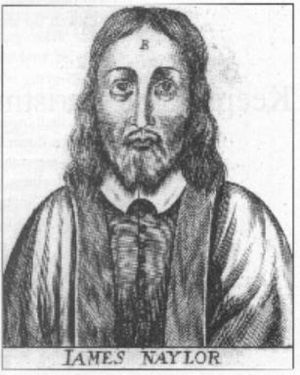 James Nayler, with a "B" ("blasphemy") branded on his forehead.

James Nayler (or Naylor; 1616–1660) was an English Quaker leader. He is among the members of the Valiant Sixty, a group of early Quaker preachers and missionaries. At the peak of his career, he preached against enclosure and the slave trade.[1]

In 1656, Nayler achieved national notoriety when he re-enacted Christ's entry into Jerusalem by entering Bristol on a donkey. He was imprisoned and charged with blasphemy.[citation needed]

He was born in the town of Ardsley in Yorkshire. In 1642 he joined the Parliamentarian army, and served as quartermaster under John Lambert until 1650.[citation needed]

After experiencing what he described as the voice of God calling him from work in his fields, Nayler gave up his possessions and began seeking a spiritual direction, which he found in Quakerism after meeting George Fox in 1652. Nayler became the most prominent of the travelling Quaker evangelists known as the "Valiant Sixty"; he attracted many converts and was considered a skilled theological debater. On several occasions, Fox expressed concern that the ministry of Nayler and his associate Martha Simmonds was becoming over-enthusiastic and erratic. Though the substance of the disagreements is unclear, by 1656 Fox and Nayler were hardly on speaking terms. On 23 September 1656, Fox visited Nayler in his prison at Exeter; when the prisoner refused to kiss his hand, Fox pushed his foot toward him, "It is my foot." It was clearly not a gesture that looked toward reconciliation, Fox never apologised, and the differences remained. Prominent Quaker author, Rufus M. Jones, however, gives a reverse description of the encounter:

Nayler tried to make a show of love and would have kissed Fox, but the latter would receive no sham kisses from one whose spirit was plainly wrong. "James," he said, "it will be harder for thee to get down thy rude company [of followers] than it was for thee to set them up."[2]

In October 1656, Nayler and his friends, including Simmonds, staged a demonstration which proved disastrous: Nayler re-enacted the arrival of Christ in Jerusalem.

On 16 December 1656 he was convicted of blasphemy in a highly publicised trial before the Second Protectorate Parliament. Narrowly escaping execution, he was branded with the letter B for Blasphemer before enduring two years' imprisonment at hard labour.[3] 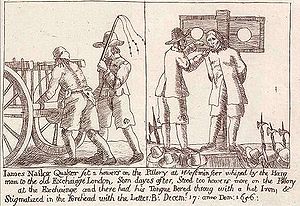 George Fox was horrified by the Bristol event, recounting in his Journal that "James ran out into imaginations, and a company with him; and they raised up a great darkness in the nation", despite Nayler's account of his actions being consistent with Quaker theology, and despite similar lofty language used by Fox and the other Quakers themselves. Nevertheless, Fox and the movement in general denounced Nayler publicly, though this did not stop anti-Quaker critics from using the incident to paint Quakers as heretics, or to equate them with Ranters. To modern eyes, Nayler's procession might not seem particularly outrageous compared to the acts of other early Quaker activists, who often disrupted church services and sometimes "went naked as a sign" (as a symbol of spiritual innocence); but at a time when Quakers were already being pressed to denounce the doctrine of the Inner Light because of its implication of equality with Christ, Nayler's ambiguous symbolism was seen as playing with fire. The Society's subsequent move, mostly driven by Fox, toward a somewhat more organised structure, including giving Meetings the ability to disavow a member, seemed to have been motivated by a desire to avoid similar problems.

Nayler left prison in 1659 a physically ruined man; he repented of his actions and was formally (but reluctantly) forgiven by Fox, who apparently required his former associate to kneel before him and ask forgiveness. He did join Quaker critics of the collapsing regime and begin to write condemnations of the nation's rulers. In October 1660, while traveling to rejoin his family in Yorkshire, he was robbed and left near death in a field, then brought to the home of a Quaker doctor in Kings Ripton. A day later and two hours before he died on 21 October, aged 42, he made a moving statement which many Quakers since have come to value deeply:

"There is a spirit which I feel that delights to do no evil, nor to revenge any wrong, but delights to endure all things, in hope to enjoy its own in the end. Its hope is to outlive all wrath and contention, and to weary out all exaltation and cruelty, or whatever is of a nature contrary to itself. It sees to the end of all temptations. As it bears no evil in itself, so it conceives none in thoughts to any other. If it be betrayed, it bears it, for its ground and spring is the mercies and forgiveness of God. Its crown is meekness, its life is everlasting love unfeigned; it takes its kingdom with entreaty and not with contention, and keeps it by lowliness of mind. In God alone it can rejoice, though none else regard it, or can own its life. It is conceived in sorrow, and brought forth without any to pity it, nor doth it murmur at grief and oppression. It never rejoiceth but through sufferings; for with the world’s joy it is murdered. I found it alone, being forsaken. I have fellowship therein with them who lived in dens and desolate places in the earth, who through death obtained this resurrection and eternal holy life."

James Nayler was buried on 21 October 1660 "in Thomas Parnell's burying-ground at King's Ripton."[4] According to the village's website "There is also a Quakers Burial ground to the rear of ‘Quakers Rest’ on Ramsey Road."[5]

There Is A Spirit: The Nayler Sonnets is a collection, first published in 1945, of 26 poems by Kenneth Boulding, each inspired by a four- to sixteen-word portion of Nayler's dying statement (and also includes the intact statement). Boulding gave permission for the publication of his The Nayler Sonnets to Irene Pickard who printed them in 1944 in the periodical she was editing from New York City, "Inward Light". The "There is a spirit ..." statement forms section 19.12 of Britain Yearly Meeting's anthology Quaker Faith and Practice. The 2007 Swarthmore Lecture has the title Ground and Spring, taken from Nayler's "There is a spirit ..." statement.

A collected edition of the Tracts of Nayler entitled A Collection of Sundry Books, Epistles, and Papers Written by James Nayler, Some of Which Were Never Before Printed: with an Impartial Relation of the Most Remarkable Transactions Relating to His Life appeared in 1716, edited by his friend (and important early Quaker) George Whitehead, though Whitehead omitted Nayler's more controversial works and freely edited and changed the text. Note that this was after the death of George Fox, who opposed the re-issuing of any of Nayler's writings.[6] See A Relation of the Life, Conversion, Examination, Confession, and Sentence of James Nayler (1657); a Memoir of the Life, Ministry, Trial, and Sufferings of James Nayler (1719); and a Refutation of some of the more Modern Misrepresentations of the Society of Friends commonly called Quakers, with a Life of James Nayler, by Joseph Gurney Bevan (1800). More recently, Quaker Heritage Press issued a complete edition of Nayler's works including letters previously available in manuscripts. The editor modernizing the spelling, punctuation, etc. noting significant textual variants without changing the original wording . The set is available in book form or in an unabridged on-line edition.[7][8]