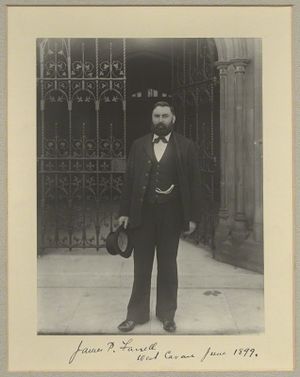 Farell stood as an Anti-Parnellite candidate at the general election in July 1895 in Kilkenny City, where the outgoing Anti-Parnellite MP Thomas Curran was not standing again. Farrell lost narrowly to the Parnellite candidate, Patrick O'Brien by a margin of only 667 votes to 681,[4] but a vacancy arose immediately in West Cavan. Edmund Vesey Knox, who had been West Cavan's MP since 1890, was re-elected there in 1895 but also won a seat in Londonderry City, and chose to sit for the latter. The resulting by-election in West Cavan was held on 2 August 1895, and Farell was elected unopposed in the first by-election of that Parliament.[5]

Farrell was a fervent supporter of land reform and spoke and wrote frequently on the subject. He was imprisoned four times between 1890 and 1910 and during his last imprisonment in Kilmainham Gaol contracted an illness which may have led to his death in 1921.[3]

When the split in the Irish Parliamentary Party was resolved in time for the 1900 general election, Farrell did not seek re-election in Cavan, but stood instead in North Longford, where he was returned unopposed.[6] He was re-elected unopposed in 1906, and at both elections in 1910,[7] but at the 1918 general election he was heavily defeated in the new Longford constituency by the Sinn Féin candidate Joseph McGuinness.[8]