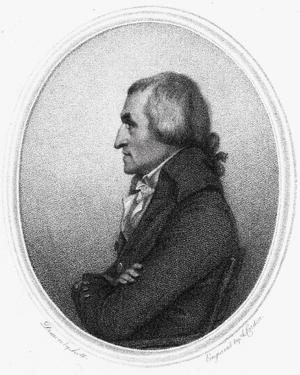 Major James Rennell, FRS (3 December 1742 – 29 March 1830) was an English geographer, historian and a pioneer of oceanography.

Rennell was born near Chudleigh in Devon. His father, John Rennell, an officer in the Royal Artillery, was killed in action shortly after the birth of his son; his mother made a "poor second marriage", leading to Rennell being brought up by a guardian, the Rev. Gilbert Burrington, vicar of Chudleigh.[1]

Rennell entered the navy as a midshipman in 1756 at the age of fourteen, and was present at the attack on Cherbourg (1758), and the disastrous action of St Cast in the same year. In 1760 he went out to the East Indian station, and served in the Grafton under Captain Hyde Parker (1714–1782) during the three following years, when he saw some active service, including a cutting-out expedition at Pondicherry. He soon mastered the theory and practice of marine surveying, and, on account of his proficiency in this regard, Parker lent his services to the East India Company. He served for a year on board one of the company's ships bound to the Philippines, with the object 'of establishing new branches of trade with the natives of the intervening places'. During this cruise Rennell drew several charts and plans of harbours, some of which have been engraved by Dalrymple.[1]

At the end of the Seven Years' War, seeing no chance of promotion, he entered the service of the East India Company's sea service. He at once received command of a vessel of two hundred tons; but she was destroyed by a hurricane in Madras roads in March 1763, with all hands. Fortunately, her captain was on shore, and he was at once appointed to command a small yacht called the Neptune, in which he executed surveys of the Palk Strait and Pamben Channel. His next cruise was to Bengal, and he arrived at Calcutta at the time when Governor Vansittart was anxious to initiate a survey of the British territory. Owing to the friendship of an old messmate, who had become the governor's secretary, Rennell was appointed surveyor-general of the East India Company's dominions in Bengal, with a commission in the Bengal Engineers, dated 9 April 1764. He was only twenty-one years of age when he met with this extraordinary piece of good fortune, and to this work he devoted the next thirteen years.[1]

Rennell's survey of Bengal, which was commenced in the autumn of 1764, was the first ever prepared. The headquarters of the surveyor-general were at Dacca, and in the successive working seasons he gradually completed his difficult, laborious, and dangerous task.

James Rennell, now known as the Father of Indian Geography, laboured in Bengal and elsewhere for a period of 13 years, during which he surveyed an area of about 300,000 square miles (780,000 km2), stretching from the eastern boundaries of Lower Bengal to Agra, and from the Himalayas to the borders of Bundelkhand and Chota Nagpur.[2] Rennell was originally just one surveyor among many, but he showed such enthusiasm and ability that Major-General Robert Clive, the governor of Bengal and Bihar, promoted him to Surveyor-General in 1767. Rennell was only 24 at the time. The mapping project was originally a general survey of newly acquired lands, but the job soon gained a wider scope under Warren Hastings, who was appointed as Governor-General in 1773. One of Hastings’ first projects was to begin a Domesday style reckoning of property, land, people, and culture for taxation of revenue. As for Rennell’s part in this, his project was carried out much like a military survey, searching for safe passage through territory, with information gathering a secondary object.[3]

In 1776, when on the frontier of Bhutan, his party was attacked by some Sannyasis, and Rennell himself was desperately wounded. He never entirely recovered from the effects of his injuries, and was thenceforth less able to withstand the effects of the climate. He received the rank of major of Bengal engineers on 5 April 1776, and retired from active service in 1777. The government of Warren Hastings granted him a pension of £600 per annum, which the East India Company somewhat tardily confirmed.[1]

Rennell surveyed Bengal separately, during his work at India and sketched up the most detail geographical information ever has listed particularly in this area. For the sake of better understanding of his data he wrote a book titled “Memoir of a map of Hindoostan”. He categorized places into seven categories: Cities (2), Capital of Province (13), Large Town (51), Large Bazar and Cutcherry (255), Small Bazar and Cutcherry (577), Village (1974) and Fort (18).[4]

The remaining fifty-three years of his life were spent in London, and were devoted to geographical research chiefly among the materials in the East India House. He took up his residence in Suffolk Street, near Portland Place, where his house became a place of meeting for travellers from all parts of the world.[1] 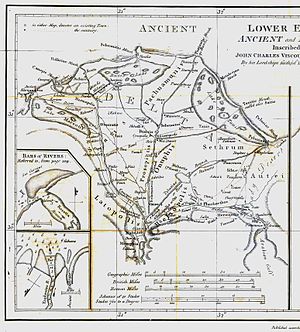 James Rennell's map of ancient Egypt, based upon the works of Herodotus.

His most valuable works include the Bengal Atlas (1779), the first approximately correct map of India (1783), the Geographical System of Herodotus (1800),[5] the Comparative Geography of Western Asia (1831), and important studies on the geography of northern Africa—apparent in introductions to the Travels of Mungo Park and Hornemann. He however forged the geographic data of Park by introducing a mountain range, the Mountains of Kong, supposedly located in the western part of Africa. The fake was intended to support his own theory about the course of the Niger River. The Mountains of Kong remained present in maps until the early 20th century. He also contributed papers to Archaeologia on the site of Babylon, the island of St Paul's shipwreck, and the landing-place of Caesar in Britain. 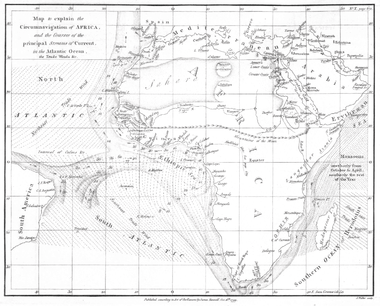 Map of the currents in Atlantic and Indian ocean around Africa, created by James Rennell in 1799. Amazing is the accuracy of the marine currents and winds in contrast to the nearly phantasylike depiction of the inner parts of Africa (unknown to the Europeans until 1877).

Beside his geographical and historical works James Rennell is known today for his hydrographical works about the currents in the Atlantic and Indian oceans. He started his research on these topics, when he was travelling by a sailing ship with his family from India to Britain after his retirement in 1777. During the extraordinary long voyage around the Cape of Good Hope[6] he mapped "the banks and currents at the Lagullas" and published in 1778 the work about what is today called the Agulhas Current. This was one of the first contributions to the science of Oceanography. He was the first to explain the causes of the occasional northern current found to the south of the Isles of Scilly, which has since become known as Rennell's Current.[1]

While in India he had married (1772) Jane Thackeray, daughter of Dr. Thomas Thackeray, headmaster of Harrow, and a great-aunt of the novelist William Makepeace Thackeray. His second son, William, was in the Bengal civil service, and died in 1819, leaving no children; the eldest, Thomas, was unmarried, and survived until 1846. His talented daughter Jane was married, in 1809, to Admiral Sir John Tremayne Rodd, KCB. Lady Rodd devoted several years to the labour of publishing her father's current charts and revising new editions of his principal works. She died in December 1863.[1]

After the death of his wife in 1810 he returned to the oceanographic topics. His numerous naval friends gave him a mass of data from their logs, which he assimilated to a chart of all currents in the Atlantic ocean. During his last years he wrote his final and most important work Currents of the Atlantic Ocean, published posthumously by his daughter Jane in 1832, which was not significantly overtaken until 1936.

He died on 29 March 1830. He was interred in the nave of Westminster Abbey, and there is a tablet to his memory, with a bust, near the western door. The year of his death saw the foundation of the Royal Geographical Society.[1]

Rennell was "of middle height, well proportioned, with a grave yet sweet expression of countenance. He was diffident and unassuming, but ever ready to impart information. His conversation was interesting, and he had a remarkable flow of spirits. In all his discussions he was candid and ingenuous".[1]