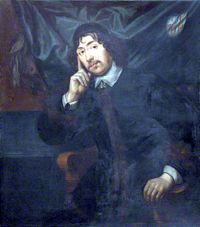 He belonged to the great period of English dramatic literature, but, in Lamb's words, he "claims a place among the worthies of this period, not so much for any transcendent genius in himself, as that he was the last of a great race, all of whom spoke nearly the same language and had a set of moral feelings and notions in common." His career of play writing extended from 1625 to the suppression of stage plays by Parliament in 1642.

Shirley was born in London. He was educated at Merchant Taylors' School, London, St John's College, Oxford, and St Catharine's College, Cambridge,[1] where he took his B.A. degree in or before 1618.

His first poem, Echo, or the Unfortunate Lovers (of which no copy is known, but which is probably the same as Narcissus of 1646), was published in 1618. After earning his M.A., he was, Wood says, "a minister of God's word in or near St Albans." Apparently in consequence of his conversion to the Roman Catholic faith, he left his living, and was master of St Albans School from 1623–25. His first play, Love Tricks, seems to have been written while he was teaching at St Albans. He removed in 1625 to London, where he lived in Gray's Inn, and for eighteen years from that time he was a prolific writer for the stage, producing more than thirty regular plays, tragedies, comedies, and tragicomedies, and showing no sign of exhaustion when a stop was put to his occupation by the Puritan edict of 1642. Most of his plays were performed by Queen Henrietta's Men, the playing company for which Shirley served as house dramatist, much as Shakespeare, Fletcher, and Massinger had done for the King's Men.

Shirley's sympathies were with the King in his disputes with Parliament and he received marks of special favor from the Queen. He made a bitter attack on William Prynne, who had attacked the stage in Histriomastix, and, when in 1634 a special masque was presented at Whitehall by the gentlemen of the Inns of Court as a practical reply to Prynne, Shirley supplied the text—The Triumph of Peace. Between 1636 and 1640 Shirley went to Ireland, under the patronage apparently of the Earl of Kildare. Three or four of his plays were produced by his friend John Ogilby in Dublin in the Werburgh Street Theatre, the first ever built in Ireland and at the time of Shirley's visit only one year old. During his Dublin stay, Shirley wrote The Doubtful Heir, The Royal Master, The Constant Maid, and St. Patrick for Ireland.[2] In his absence from London, Queen Henrietta's Men sold off a dozen of his plays to the stationers, who published them in the late 1630s. Shirley, when he returned to London in 1640, would no longer work for the Queen Henrietta's company as a result; his final plays of his London career were acted by the King's Men.

On the outbreak of the English Civil War he seems to have served with the Earl of Newcastle, but when the King's fortunes began to decline he returned to London. He owed something to the kindness of Thomas Stanley, but supported himself chiefly by teaching, publishing some educational works under the Commonwealth. Besides these he published during the period of dramatic eclipse four small volumes of poems and plays, in 1646, 1653, 1655, and 1659. He "was a drudge" for John Ogilby in his translations of the Iliad and the Odyssey, and survived into the reign of Charles II, but, though some of his comedies were revived, he did not again attempt to write for the stage. Wood says that Shirley, who was aged seventy, and his second wife died of fright and exposure after the Great Fire of London, and were buried at St Giles in the Fields on 29 October 1666.

Shirley was born to great dramatic wealth, and he handled it freely. He constructed his own plots out of the abundance of materials that had been accumulated during thirty years of unexampled dramatic activity. He did not strain after novelty of situation or character, but worked with confident ease and buoyant copiousness on the familiar lines, contriving situations and exhibiting characters after types whose effectiveness on the stage had been proved by ample experience. He spoke the same language with the great dramatists, it is true, but this grand style is sometimes employed for the artificial elevation of commonplace thought. "Clear as day" becomes in this manner "day is not more conspicuous than this cunning"; while the proverb "Still waters run deep" is ennobled into — "The shallow rivers glide away with noise — The deep are silent." The violence and exaggeration of many of his contemporaries left him untouched. His scenes are ingeniously conceived, his characters boldly and clearly drawn; and he never falls beneath a high level of stage effect.

The following list includes years of first publication, and of performance if known, and dates of licensing by the Master of the Revels where available.

In 1633 Shirley revised a play by John Fletcher, possibly called The Little Thief, into The Night Walker, which was acted in 1634 and printed in 1640. In 1634-5, Shirley revised The Tragedy of Chabot, Admiral of France, a play that George Chapman had written sometime between 1611 and 1622. The revised version was printed in 1639. Shirley has sometimes been credited as a collaborator with William Cavendish, 1st Duke of Newcastle on Cavendish's play The Country Captain (printed 1649).

Shirley's Poems (1646) contained "Narcissus," and the masque The Triumph of Beauty. A Contention for Honour and Riches (1633) appeared in an altered and enlarged form in 1659 as Honoria and Mammon. His Contention of Ajax and Ulysses closes with the well-known lyric, "The Glories of our Blood and State." In the final pedagogic stage of his career, Shirley published an English grammar written in poetry, titled Rudiments of Grammar: The Rules Composed in English Verse for the Greater Benefit and Delight of Young Beginners (1656).

Eight of Shirley's plays were reprinted in a single quarto volume in 1640; these were The Young Admiral, The Duke's Mistress, Hyde Park, Love's Cruelty, The Wedding, The Constant Maid, The Opportunity, and The Grateful Servant. In 1653 another collection was published by Humphrey Moseley and Humphrey Robinson; titled Six New Plays, the volume included The Brothers, The Sisters, The Doubtful Heir, The Imposture, The Cardinal, and The Court Secret.[3]

Shirley's canon presents fewer problems and lost works than the canons of earlier dramatists; yet William Cooke registered a Shirley tragedy titled Saint Albans on 14 February 1639 — a play that has not survived. The anonymous tragedy Andromana was assigned to Shirley when it was first published in 1660, though scholars have treated the attribution with skepticism.[4]

The standard edition of Shirley's works is The Dramatic Works and Poems of James Shirley, with Notes by William Gifford, and Additional Notes, and some Account of Shirley and his Writings, by Alexander Dyce (6 vols., 1833). A selection of his plays was edited (1888) for the Mermaid Series, with an introduction by Edmund Gosse.

A new 10 volume edition of James Shirley's work is currently being edited for Oxford University Press.[5]