Moray was born in about 1531, the most notable of the many illegitimate children of King James V of Scotland. His mother was the King's favourite mistress, Lady Margaret Erskine, daughter of John Erskine, 5th Lord Erskine, and wife of Sir Robert Douglas of Lochleven. On 31 August 1536 he had a charter of the lands of Tantallon and others. James was appointed Prior of St Andrews, Fife, in his youth in 1538.[2] This position supplied his income. As early as May 1553, the imperial ambassador to England, Jean Scheyfve, heard that Mary of Guise planned to make him Regent of Scotland in place of James Hamilton, Duke of Châtellerault.[3]

On 5 August 1557, Moray, his half-brother Lord Robert, and Lord Home led a raiding party from Edinburgh towards Ford Castle in Northumbria and burnt houses at Fenton before retreating on the approach of an English force led by Henry Percy.[4] James attended the wedding of his legitimate half-sister, Mary, Queen of Scots, in Paris. To fund this trip his mother obtained credit from Timothy Cagnioli, an Italian banker in Edinburgh.[5]

James became a supporter of the Scottish Reformation. At Perth in June 1559 he plucked down the images in various churches.[6] An English commentator praised James for his virtue, manhood, valour and stoutness as a leader of the Protestant Lords of the Congregation.[7]

Despite their religious differences, Moray became the chief advisor to his sister, Mary, Queen of Scots, in 1561 after her return from France. She was the only surviving child of his father's marriage to Mary of Guise. Although James disturbed her priests celebrating mass at Holyroodhouse in September 1561,[8] she made him Earl of Moray and Earl of Mar the following year.[9] With the earldom came Darnaway Castle with its medieval hall, notable even then as "verie fayer and large builded." Moray also had a smaller house called Pitlethie near Leuchars in Fife, which his father had used.[10]

In October 1562, he defeated a rebellion by George Gordon, 4th Earl of Huntly, at the Battle of Corrichie near Aberdeen. Moray opposed the marriage of Mary, Queen of Scots, to Lord Darnley in 1565, and he embarked upon the unsuccessful Chaseabout Raid, together with the Earl of Argyll and Clan Hamilton. He was subsequently declared an outlaw and took refuge in England. Returning to Scotland after the murder of David Rizzio, he was pardoned by the Queen. He contrived, however, to be away at the time of Darnley's assassination, and avoided the tangles of the marriage with Bothwell by going to France.

Mary abdicated at Loch Leven Castle on 24 July 1567. Moray returned to Edinburgh from France on 11 August 1567, escorted from Berwick-upon-Tweed by James Melville of Halhill, with a French ambassador, De Lignerolles. William Cecil, the English secretary of State had arranged his transport from Dieppe in an English ship.[11] He was appointed Regent of Scotland on 22 August.[12]

The appointment was confirmed by Parliament in December. When Mary escaped from Loch Leven on 2 May 1568 the Duke of Chatelherault and other nobles rallied to her standard, but Moray gathered his allies and defeated her forces at the Battle of Langside, near Glasgow on 13 May 1568. Mary was compelled to flee to England. For this and the subsequent management of the kingdom he secured both civil and ecclesiastical peace, and earned the title of "The Gude Regent".

In September 1568, Moray chose commissioners and went to York to discuss a treaty with England. During this conference he produced the casket letters which were supposed to incriminate Queen Mary, and justify his rule in Scotland. It was later said that a plan to assassinate him at North Allerton on his way back had been called off.[13]

Scotland was now in a state of civil war. Moray moved against the supporters of Queen Mary in their south-west homelands with a military expedition in June 1568 called the 'Raid of Dumfries' or 'Raid of Hoddom.' The Regent's army and the royal artillery was taken to Biggar, where his allies were commanded to muster on 10 June, and on to Dumfries. The army was protected by a scouting party led by Alexander Hume of Manderston, the vanguard was commanded by the Earl of Morton and Lord Hume. Behind was the 'carriage', the artillery train, followed by Moray himself. The Laird of Cessford followed behind, and the army was flanked by the scouting parties of the Lairds of Merse and Buccleuch.

Along the way Moray captured houses belonging to supporters of Queen Mary, including Lord Fleming's Boghall, Skirling, Crawford, Sanquhar, Kenmuir, and Hoddom where the cannon were deployed, and Annan where he rendezvoused with Lord Scrope the Captain of Carlisle Castle to discuss border matters. Scrope estimated the army to number 6,000 men, and returned to Carlisle where he saw Queen Mary's servants play football on 14 June. Moray then took Lochmaben Castle, which the Laird of Drumlanrig was left to hold, and then captured Lochwood and Lochhouse before returning to Edinburgh via Peebles. At Dumfries, a number of Lord Maxwell's supporters surrendered.[14] Moray was responsible for the destruction of Rutherglen castle, which he burned to the ground in 1569 in retribution against the Hamiltons for having supported Mary at the Battle of Langside.

In June 1569 Moray went north to Brechin where he accepted hostages sent by the Earl of Huntley, then at Dunnotar Castle he proclaimed that he had, "reparit (arrived) in proper person (as Regent) to thir north partis of firm purpose and deliberation to reduce sic as hes neglectit their duty in time bypast ..., intending to use lenitie (leniency) and moderation."[15]

At Aberdeen he held talks with Huntly himself. At Inverness, on 4 June 1569, Moray met the Highland and Island chiefs with the Earls of Caithness and Sutherland and Lord Lovat . His secretary, John Wood, said "such a power had seldom been seen there," Moray wrote that "the journey is to put down troubles in the north."[16] 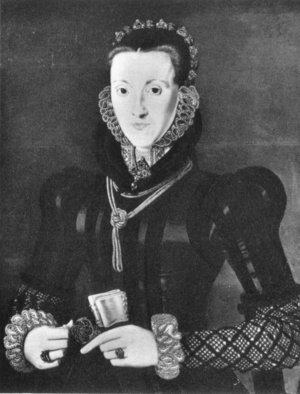 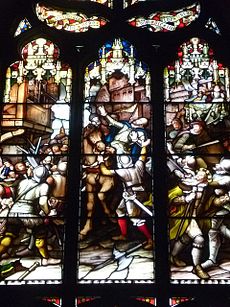 On Thursday 19 January 1570 Moray was at Stirling Castle where he had invited the English diplomat Sir Henry Gate, Marshal of Berwick, and the soldier Sir William Drury for dinner in the Great Hall. Later in his bedchamber he told the English visitors he would meet with them and certain Scottish nobles at Edinburgh on Monday or Tuesday to discuss the rendition of English rebels. Moray was troubled by the problem of Dumbarton Castle, which was held against him by supporters of Mary, Queen of Scots.[20] On 21 January, he sent letters to summon Morton, Lindsay and Home to the meeting in Edinburgh.[21]

Moray was assassinated in Linlithgow on 23 January 1570 by James Hamilton of Bothwellhaugh, a supporter of Mary. As Moray was passing in a cavalcade in the main street below, Hamilton fatally wounded him with a carbine shot from a window of his uncle Archbishop Hamilton's house.[22] It was the first recorded assassination by a firearm.[23]

The Regent's body was shipped to Leith then taken to Holyrood Abbey.[24] Moray was buried on 14 February 1570 in St. Anthony's aisle at St. Giles, Edinburgh. Seven earls and lords carried his body; William Kirkcaldy of Grange held his standard, and John Knox preached at the funeral.[25] Knox's own prohibition of funeral sermons (on the grounds that they glorified the deceased and displayed distinctions between rich and poor) was waived for the occasion.[26] Moray's tomb was carved by John Roytell and Murdoch Walker, with a brass engraved by James Gray.[27] His wife, Agnes Keith, was buried inside his tomb when she died in 1588.[28] Moray was succeeded by his eldest daughter and heir, Elizabeth Stewart, 2nd Countess of Moray, whose husband, James Stewart of Doune acquired the earldom on their marriage.

Notable media depictions of Moray include Patrick McGoohan's portrayal of James Stewart (pre-Regency) in the 1971 film Mary, Queen of Scots. He also features in Sir Walter Scott's 1820 novel The Monastery.