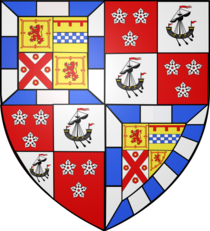 Captain James Stewart, Earl of Arran (died 1595) was created Earl of Arran by the young King James VI, who wrested the title from James Hamilton, 3rd Earl of Arran. He rose to become Lord Chancellor of Scotland and was eventually murdered in 1595.

He was the second son of Andrew Stewart, 2nd Lord Ochiltree, by his wife Agnes, the daughter of John Cunningham, 5th of Capringtoun, Ayrshire. Stewart's sister, Margaret, was married to the reformer John Knox.

In April 1573, James was sent as a 'pledge' or hostage to England for the security of the English army and artillery sent to the 'Lang Siege' of Edinburgh Castle. (The Castle was held by supporters of Mary Queen of Scots). Regent Morton gave him £55 for his expenses in England.[1] He was Captain of the Royal Guard of James VI.

James was a follower of Esmé Stewart, and in January 1580 he accused the former Regent Morton, still the effective power in Scotland, of participation in the murder of Henry Stuart, Lord Darnley. Stewart was rewarded as Tutor of Arran, with powers over the earldom of the mentally-ill James Hamilton, 3rd Earl of Arran, then made Earl of Arran on 22 April 1581.

In July he married Elizabeth Stewart, the divorced former wife of the King's great-uncle, Robert Stewart, once Earl of Lennox and now Earl of March. Elizabeth, the Countess of Arran, born 1549, was the daughter of John Stewart, 4th Earl of Atholl.

Esmé Stewart was made Earl, then Duke of Lennox, and he and Arran became partners in government.

The government of Scotland by Lennox and Arran, and their correspondence with France and Spain, made them unpopular in England and with the "ultra-Protestant" sector at home, although the young King greatly admired Lennox and enjoyed his company.

In August 1582 Lennox and Arran held the Privy Council at Perth, and then returned to Dalkeith Palace near Edinburgh. James VI was invited to stay hunting in Perthshire, and he was taken at Huntingtower Castle by the Earl of Gowrie and his political faction on 22 August 1582, a kidnap known as the Ruthven Raid. The next day they gave the King their supplication or mandate, which stated;

We have suffered now about the space of two years such false accusations, calumnies, oppressions and persecutions, by the means of the Duke of Lennox and him who is called the Earl of Arran, that the like of their insolencies and enormities were never heretofore born with in Scotland.

Arran went to Huntingtower and was arrested by the raiders. Lennox was sent in exile to France and died. Gowrie ran Scotland for ten months, after issuing an indictment against Lennox and Arran that included the detail that the Countess of Arran was "a vile and impudent woman, over famous for her monstrous doings, not without suspicion of the devilish magical art." Arran was permitted to attend some council meetings to bolster support for the new regime.[2]

Arran regained power in July 1583, an ascendancy that would last for two years, and the Ruthven Raiders and their followers were banished to Newcastle upon Tyne. After May 1584, he was always recorded first in the lists of those attending the Scottish Privy Council. Arran acted against the Presbyterian wing of the Scottish church, and the banished lords of the Ruthven Raid, who had returned to assault Stirling Castle. The role of his wife in the administration also attracted the censure of Edinburgh Kirk ministers.

Arran's rule was undermined in part by the machinations of his own diplomat in London, the young Master of Gray. By February 1585, Elizabeth opened two lines of communication in Scotland, one with Arran and another with the Master.[3]

Arran fell from power after a border incident when the Englishman Francis Russell, son of the second Earl of Bedford, was killed with a "shot from a dag" on 27 July 1585. Arran was accused of involvement by the English ambassador, Nicholas Wotton and James VI on first hearing the news had offered to send Arran as a prisoner to England.[4] Instead Arran was imprisoned at St Andrews Castle and then placed in house arrest at his own Kinneil House. He was unable to prevent the Banished Lords of the Ruthven Raid returning from England and seizing Stirling Castle on 4 November 1586. Avoiding plans for his banishment, he spent the rest of his life in retirement in Ayrshire.[5] He was murdered by Sir James Douglas of Parkhead, nephew of Regent Morton, on December 5, 1595.[6]