From Infogalactic: the planetary knowledge core
Jump to: navigation, search
This article is about the Scottish surgeon. For the ice hockey player, see James Syme (ice hockey). 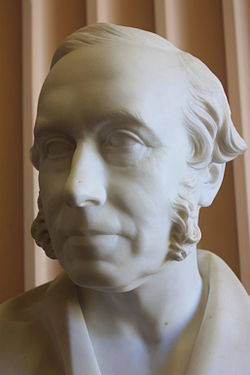 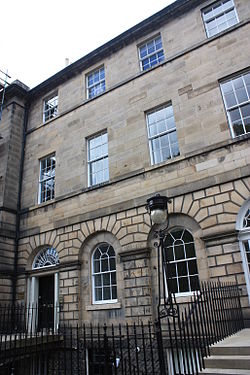 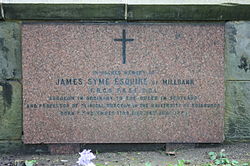 He was born on 7 November in Edinburgh. His father was a writer to the signet and a landowner in Fife and Kinross, who lost most of his fortune in attempting to develop the mineral resources of his property. James was sent to the Royal High School at the age of nine, and remained until he was fifteen, when he entered the University of Edinburgh. For two years he frequented the arts classes (including botany), and in 1817 began the medical curriculum, devoting himself with particular keenness to chemistry. His chemical experiments led him to the discovery that a valuable substance is obtainable from coal tar which has the property of dissolving india-rubber, and could be used for waterproofing silk and other textile fabrics; an idea which was patented a few months afterwards by Charles Macintosh, of Glasgow (see also Mackintosh).[1]

Syme married the sister of his former colleague, Robert Willis.

In the dissecting room

In the session 1818–1819 Syme became assistant and demonstrator of the dissecting room of Robert Liston, who had started as an extramural teacher of anatomy in competition with Liston's old master, Dr John Barclay; in those years he held also resident appointments in the infirmary and the fever hospital, and spent some time in Paris practising dissection and operative surgery. In 1823 Liston handed over to him the whole charge of his anatomy classes, retaining his interest in the school as a pecuniary venture; the arrangement did not work smoothly, and a feud with Liston arose, which did not terminate until twenty years later, when Syme settled in London.[1]

In 1824–1825, he started the Brown Square school of medicine, but again disagreed with his partners in the venture. Announcing his intention to practise surgery only, Syme started a surgical hospital of his own, Minto House hospital, which he carried on from May 1829 to September 1833, with great success as a surgical charity and school of clinical instruction. It was here that he first put into practice his method of clinical teaching, which consisted in having the patients to be operated or prelected upon brought from the ward into a lecture-room or theatre where the students were seated conveniently for seeing and taking notes.[1]

His private practice had become very considerable, his position having been assured ever since his amputation at the hip joint in 1823, the first operation of the kind in Scotland. In 1833 he succeeded Prof James Russell as Professor of Clinical Surgery in Edinburgh University. Syme's accession to the clinical chair was marked by two important changes in the conditions of it: the first was that the professor should have the care of surgical patients in the infirmary in right of his professorship, and the second, that attendance on his course should be obligatory on all candidates for the medical degree. When Liston removed to London in 1835 Syme became the leading consulting surgeon in Scotland.[1]

In 1847 Syme was accepted the chair of clinical surgery at University College, London left vacant after Liston's death. He began practice in London in February 1848; but early in May the same year difficulties with two of his colleagues at Gower Street and a desire to escape from animosity and contention led him to throw up his appointment. He returned to Edinburgh in July, and was reinstated in his old chair, to which the crown authority had meanwhile found a difficulty in appointing. The judgment of his friends was that he was always right in the matter, but often wrong in the manner, of his quarrels.[1] He was elected President of the Royal College of Surgeons of Edinburgh in 1849.

In 1849, he broached the subject of medical reform in a letter to the lord advocate; in 1854 and 1857 he addressed open letters on the same subject to Lord Palmerston; and in 1858 a Medical Act was passed which largely followed the lines laid down by himself. As a member of the general medical council called into existence by the act, he made considerable stir in 1868 by an uncompromising statement of doctrines on medical education, which were thought by many to be reactionary; they were, however, merely an attempt to recommend the methods that had been characteristic of Edinburgh teaching since William Cullen's time—namely, a constant reference of facts to principles, the subordination (but not the sacrifice) of technical details to generalities, and the preference of large professional classes and the magnetism of numbers to the tutorial system, which he identified with cramming.[1]

In April 1869, he had a paralytic seizure, and at once resigned his chair; he never recovered his powers, and died near Edinburgh in June 1870.[1] He was a Christian whose religious feeling increased as he grew older.[2]

Syme is buried on the upper north-east terrace of St John's Episcopal Churchyard at the east end of Princes Street, Edinburgh.

Syme's character is not inaptly summed up in the dedication to him by his old pupil, Dr John Brown, of the series of essays Locke and Sydenham: Verax, capax, perspicax, sagax, efficax, tenax.[1]

Syme's daughter Agnes married Joseph Lister, who in 1854 had been appointed first assistant surgeon to Syme at the University of Edinburgh.

Syme's surgical writings were numerous, although the terseness of his style and directness of his method saved them from being bulky:[1]