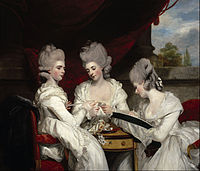 The Ladies Waldegrave, by Joshua Reynolds, 1770–80

The eldest son of the 1st Earl Waldegrave, Waldegrave was educated at Westminster and Eton and he inherited his father's titles in 1741. He was a Lord of the Bedchamber from 1743–52, appointed to the Privy Council in 1752 and Governor to The Prince of Wales and The Prince Edward from 1752–56. On 15 May 1759, he married Maria Walpole, the illegitimate daughter of Sir Edward Walpole and they had three daughters:

After the resignation of The Duke of Newcastle in November 1756, George II dismissed William Pitt (the driving force of the new government) in April 1757 and invited Lord Waldegrave to take over from Newcastle's successor, The Duke of Devonshire as First Lord of the Treasury. And so, Devonshire was briefly dismissed and Lord Waldegrave tried to form a government from 8–12 June that year but failed to do so and stepped down, partly because he feared that as Prime Minister, he would fall out with his close friend, the King (as his predecessors had done). Devonshire then continued as First Lord and Prime Minister for almost another two weeks and Newcastle returned a week later.

Lord Waldegrave was awarded the Garter soon after and retired from public life upon the accession of George III in 1760. He died of smallpox three years later and lacking male heirs, his titles passed to his younger brother, John.

After his death, his widow Maria married into the British Royal Family becoming the wife of Prince William Henry, Duke of Gloucester and Edinburgh, King George III's brother