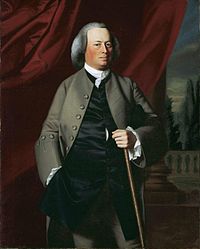 James Warren circa 1763 Oil on canvas by John Singleton Copley

James Warren (September 28, 1726 – November 28, 1808) was the President of the Massachusetts Provincial Congress and a Paymaster General of the Continental Army during the American Revolutionary War, among other positions. He is also famous as the husband of Mercy Otis Warren and for his outspoken courage as an Anti-Federalist. General James Warren is sometimes confused with the two other Massachusetts Revolutionaries, the brothers Joseph Warren and John Warren, but they were not at all closely related, merely had similar names and views.

James Warren was born, raised and died in Plymouth, Massachusetts. He was descended from Mayflower passengers Richard Warren and Edward Doty. Warren graduated from Harvard in 1745, and in 1747 succeeded his father as sheriff of Plymouth County, Massachusetts.[1]

In 1754 Warren married his second cousin Mercy Otis Warren, who like him was also descended from Edward Doty. The couple had five sons: James (1757–1821), Winslow (1759–1791), Charles (1762–1784), Henry (1764–1828), and George (1766–1800). Mercy Warren was the daughter of James Otis and sister of Warren's firebrand lawyer friend James Otis, Jr., as well as a historian, poet and playwright. She hosted political meetings in their home, and also became known for her correspondence, including with Abigail Adams, John Adams and Catherine Macauley. With her husband's support Mercy Warren, published at least two political plays, The Adulateur (in 1772) and The after the war, a volume of poetry (in 1790) and History of the American Revolution (in 1805).

A farmer and merchant as well as trained as a lawyer, Warren became an outspoken critic of British governmental policies following the Stamp Act of 1765. He began a twelve year term in the lower house of the Massachusetts General Court in 1766, and was elected its speaker in 1775. Following the colony's break from Britain, in 1776 Warren was elected a member of the Provincial Congress. A member of the Sons of Liberty, Warren worked closely with his father-in-law and brother-in-law (both James Otis), and with Samuel and John Adams.

Warren was more prominent in the early days of the Revolution than in the war itself. He fought in the Battle of Bunker Hill, and after Dr. Joseph Warren died in that engagement, succeeded him as President of the Provisional Congress. Warren also served as Paymaster General of the Continental Army from 1776, and on the Naval Board. He thus worked closely with George Washington throughout the conflict. Commissioned a major general in the Massachusetts militia over his wife's opposition, Warren refused to serve under Continental Army officers of lesser rank whom he had worked with as Paymaster General. Claimed illness, he refused to accept command in Rhode Island, then resigned his state commission in 1777. His duties within mostly British-occupied Massachusetts meant Warren took no part in battles after military action moved away from Boston. However, his son U.S. Navy Lieutenant James Warren Jr. lost a leg in a naval engagement. Another son, Lieutenant Winslow Warren died in the Battle of the Wabash in the Northwest Territory, the greatest defeat of the U.S. Army by Native Americans in the United States and part of the Northwest Indian War. He was a charter member of the American Academy of Arts and Sciences (1780).[2]

After the Revolutionary War, Warren became controversial as an Anti-Federalist, opposing the new Constitution. Both he and Mercy submitted essays to the local newspaper as "Helvitius Priscus". Mercy Warren also wrote a pamphlet (Observations on the New Constitution) under the pen-name "A Columbian Patriot". However, their political stance put them at odds with some of Boston's mercantile elite, including Governor John Hancock (who helped Warren's opponent in an election for Lieutenant Governor), and his former ally Samuel Adams.

James Warren is buried on Burial Hill in Plymouth, Massachusetts,[3] as is his wife (who survived him by six years). Their son Lieutenant Winslow Warren, is buried in Ohio.[4] Other sons became distinguished doctors, lawyers and merchants in Boston. Their great-great grandson, Charles Warren became a distinguished lawyer and historian.