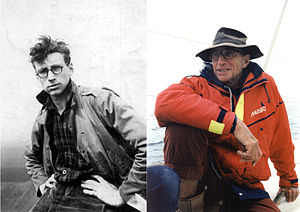 James Wharram (born 15 May 1928 in Manchester, England) is a multihull pioneer and designer of catamarans.

James Wharram is considered the ‘father’ of multihulls in many countries.[citation needed]

In 1953, after long studies into the records of boats of the Pacific in the libraries and museums of Britain, and inspired by Eric de Bisschop’s book ‘The voyage of the Kaimiloa’,[1] he designed and built the first British ocean-going double-canoe/catamaran, the Tangaroa (length 23'6" / 7.2 m) and in 1955-56 sailed with Jutta Schultze-Rohnhof and Ruth Merseburger,[2][3][4] across the Atlantic to Trinidad[5] - the beginning of cruising and transatlantic crossing with a catamaran.

No scholars in the Western world at this time believed that the Polynesians had boats capable of directed ocean voyages. James believed otherwise and set out to prove it by doing it himself. He followed this first Atlantic crossing by building a 40’ v-hull double canoe, Rongo, in Trinidad in 1957/8, with Bernard Moitessier's help, and sailing her across the North Atlantic in 1959 from New York to Ireland.[6] This was the first West-to-East crossing of the Atlantic by catamaran/multihull.

The story was told by Wharram in the 1969 book Two Girls Two Catamarans.[7]

Since these first pioneering voyages, James, from 1973 assisted by his co-designer Hanneke Boon,[8] has been designing Polynesian style catamarans for people to build themselves, to bring the concept of seaworthy, ocean-going double canoes to the Western yachting public, meeting a lot of resistance from the British yachting establishment on the way, particularly in the early years, when people still could not accept that a ‘native’ boat could be as good or better a sailing ship than a Western type yacht, particularly when such a craft was self-built by an ‘amateur’. After more than 50 years they are now an accepted feature in the world of yachting/ocean sailing and can be seen in most harbours of the world.

In 1987-92 James and his partners built a new flagship, the 63-foot catamaran Spirit of Gaia, which they sailed into the Pacific and round the world, to study Indo-Pacific canoe-craft (1994–98).

In 2008-9 James Wharram and Hanneke Boon conceived the Lapita Voyage expedition, sailing two double canoes based on traditional Polynesian hullform, from the Philippines to Tikopia and Anuta in the Solomon Islands. The ‘Lapita Voyage’[9] was a major expedition in Experimental Marine Archaeology. It was the first exploration of one possible migration route into the Central Pacific by Ethnic sailing craft. This voyage was comparable to Thor Heyerdahl’s voyage of the Kon-Tiki with which he attempted to prove the Polynesians migrated into the Pacific from South America (since proven incorrect). The two boats were donated to the remote Polynesian islands for future transport use.

James and Hanneke are at present involved with designing sailing double canoes for use in remote Pacific islands to help with the increasing transport problems.

Wharram designs are inspired by Polynesian double canoes and typically have an open deck, with small deckpod(s) for crew shelter. James Wharram combined boat building with studies of Polynesian culture. Most modern catamarans are built as a single rigid structure thereby sustaining greater forces and stresses in waves, whereas on Wharrams the separate hulls are connected to the crossbeams with (synthetic) rope lashings, in true Polynesian style. The flexibility of the Wharram system makes the boats suffer less stress in ocean waves.[10]

The rig on Wharrams since the early 1980s is the 'Wharram Wingsail Rig',[11] an appropriate tech squareheaded rig with low turbulence pocket round the mast and a short adjustable gaff at the head. The advantages of this rig are simplicity, low turbulence and the fact that it can be lowered in a following wind at any time. The Centre of effort on all Wharram rigs is kept low, giving them very good stability. No full-size Wharram has been known to have capsized.[12]

Many of the cabin interiors are designed to flexy-space principles, the concept being multi-purpose space on a human scale, in which less is more and the simpler the construction, the better. The slim v-shaped hulls have a very good speed/length ratio and all have canoe sterns, giving minimum drag, even when loaded. This hullshape requires no keels or boards to sail to windward, giving hulls with little draft and easy beachability. Wharram also keeps freeboards low for minimum windage.[13]

Wharram stands for a philosophy of "Sea People". Wharram plans are drawn in a way that anyone can build a reliable transatlantic catamaran. The professional plans are based on years of practical boatbuilding and sailing experience of the designers, and are therefore easier to build than amateur self-drawn boats, and are designed for self-building in ply/epoxy/glass. Wharrams are inexpensive, stable, seaworthy and easy to handle. 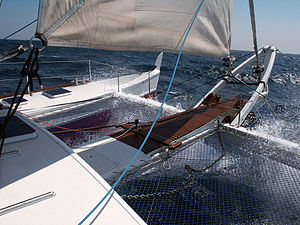 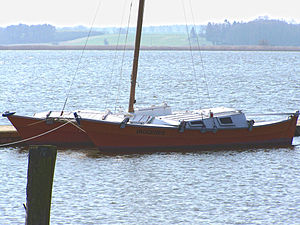 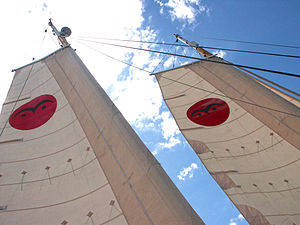