James Wyatt RA (3 August 1746 – 4 September 1813), was an English architect, a rival of Robert Adam in the neoclassical style and neo-Gothic style.

Wyatt spent six years in Italy, 1762–1768, in company with Richard Bagot of Staffordshire, who was Secretary to the Earl of Northampton's embassy to the Venetian Republic. In Venice, Wyatt studied with Antonio Visentini (1688–1782) as an architectural draughtsman and painter. In Rome he made measured drawings of the dome of St. Peter's Basilica, "being under the necessity of lying on his back on a ladder slung horizontally, without cradle or side-rail, over a frightful void of 300 feet".

Back in England, his selection as architect of the proposed Pantheon or "Winter Ranelagh" in Oxford Street, London brought him almost unparalleled instant success. His brother Samuel was one of the principal promoters of the scheme, and it was doubtless due to him that the designs of a young and almost unknown architect were accepted by the Committee. When the Pantheon was opened in 1772, their choice was at once endorsed by the fashionable public: Horace Walpole pronounced it to be "the most beautiful edifice in England".

Externally it was unremarkable (illustration, right), but the classicising domed hall surrounded by galleried aisles and apsidal ends, was something new in assembly rooms, and brought its architect immediate celebrity. The design was exhibited at the Royal Academy, private commissions followed, and at the age of 26 Wyatt found himself a fashionable domestic architect and on the 27 August 1770 an Associate of the Royal Academy.[1] His polished manners secured him friends as well as patrons among the great, and when it was rumoured that he was about to leave the country to become architect to Catherine II of Russia, a group of English noblemen is said to have offered him a retaining fee of £1,200 to remain in their service. His major neoclassical country houses include Heaton Hall near Manchester (1772), Heveningham Hall in Suffolk (circa 1788-99), and Castle Coole in Ireland, as well as Packington Hall in Staffordshire, the home of the Levett family for generations, and Dodington Park in Gloucestershire for the Codrington family. On the 15 February 1785 Wyatt was elected an Academician of the Royal Academy, his diploma work being a drawing of the Darnley Mausoleum.[2]

In later years, he carried out alterations at Frogmore for Queen Charlotte, and was made Surveyor-General of the Works. In about 1800, he was commissioned to carry out alterations to Windsor Castle which would probably have been much more considerable had it not been for the King's illness, and in 1802 he designed for the King the "strange castellated palace" at Kew which was remarkable for the extensive employment of cast iron in its construction.

Between 1805 and 1808 Wyatt remodelled West Dean House in West Dean, West Sussex. Wyatt’s work was remarkable because it is built entirely of flint, even to the door and window openings, which would normally be lined with stone.

In 1776, Wyatt succeeded Henry Keene as Surveyor to Westminster Abbey (in which year he was appointed Elizabeth, Countess of Home's architect on Home House, though he was sacked and replaced by Robert Adam a year later). In 1782 or 1783 he became, in addition, Surveyor of the Ordnance. The death of Sir William Chambers brought him the post of Surveyor General and Comptroller of the Works in 1796. 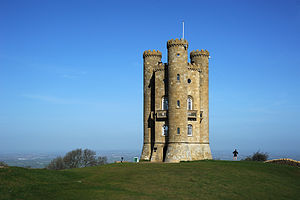 Broadway Tower, England. Designed by James Wyatt in the 1790s.

Wyatt was now the principal architect of the day, the recipient of more commissions than he could well fulfil. His widespread practice and the duties of his official posts left him little time to give proper attention to the individual needs of his clients. As early as 1790, when he was invited to submit designs for rebuilding St Chad's Church at Shrewsbury, he broke his engagements with such frequency that the committee "became at length offended, and addressed themselves to Mr. George Stewart[disambiguation needed]". In 1804, Jeffry Wyatt told Farington that his uncle had lost "many great commissions" by such neglect. When approached by a new client, he would at first take the keenest interest in the commission, but when the work was about to begin he would lose interest in it and "employ himself upon trifling professional matters which others could do". His conduct of official business was no better than his treatment of his private clients, and there can be no doubt that it was Wyatt's irresponsible habits which led to the reorganization of the Board of Works after his death, as a result of which the Surveyor's office was placed in the hands of a political chief assisted by three "attached architects". 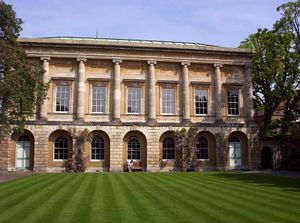 The Senior Common Rooms and Senior Library of Oriel College, Oxford. Designed by James Wyatt in the 1780s.

Wyatt was a brilliant but facile designer, whose work is not characterized by any markedly individual style. At the time he began practice the fashionable architects were the brothers Adam, whose style of interior decoration he proceeded to imitate with such success that they complained of plagiarism in the introduction to their Works in Architecture, which appeared in 1773. Many years later Wyatt himself told George III that "there had been no regular architecture since Sir William Chambers – that when he came from Italy he found the public taste corrupted by the Adams, and he was obliged to comply with it". Much of Wyatt's classical work is, in fact, in a chastened Adam manner with ornaments in Coade stone and "Etruscan" medallions executed in many cases by the painter Biagio Rebecca, who was also employed by his rivals. It was not until towards the end of his life that he and his brother Samuel (with whom must be associated their nephew Lewis) developed the severe and fastidious style of domestic architecture which is characteristic of the Wyatt manner at its best. (1) But among Wyatt's earlier works there are several (e.g., the Christ Church gateway and the mausoleum at Cobham) which show a familiarity with Chambers Treatise on the Decorative Part of Civil Architecture, and so permit the belief that if his artistic integrity had been greater Wyatt might have continued the Chambers tradition instead of falling in with the "corrupt taste" of the brothers Adam. Had he been given the opportunity of designing some great public building, it is possible that he would have shown himself a true disciple of Chambers; (2) but his career as a government architect coincided with the Napoleonic wars, and his premature death deprived him of participation in the metropolitan improvements of the reign of George IV. 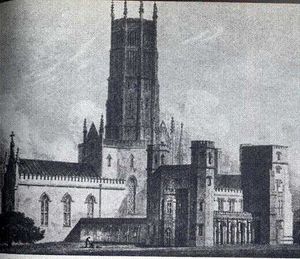 Meanwhile, Wyatt's reputation as a rival to Robert Adam had been eclipsed by his celebrity as a Gothic architect. Every Georgian architect was called upon from time to time to produce designs in the medieval style, and Wyatt was by no means the first in the field. However, whereas his predecessors had merely Gothicized their elevations by the addition of battlements and pointed windows, Wyatt went further and exploited to the full the picturesque qualities of medieval architecture by irregular grouping and the addition of towers and spires to his silhouettes. Never, indeed, have the romantic possibilities of Gothic architecture been more strikingly demonstrated than they were by Wyatt at Fonthill Abbey and Ashridge; and although crude in scale and often unscholarly in detail, these houses are among the landmarks of the Gothic revival in England. In his lifetime Wyatt enjoyed the reputation of having "revived in this country the long forgotten beauties of Gothic architecture", but the real importance of his Gothic work lay in the manner in which it bridged the gap between the rococo Gothic of the mid 18th century and the serious medievalism of the early 19th century. 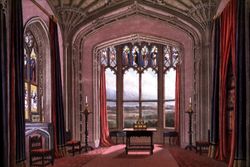 View in the Gallery, Fonthill: a coloured print from the elaborately-produced souvenir album commissioned by Beckford 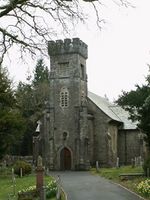 Of his cathedral restorations, inspired as they were by the mistaken idea that a medieval church ought to be homogeneous in style and unencumbered by screens, monuments, and other obtrusive relics of the past, it can only be said that the Chapters who employed him were no more enlightened than their architect, and that at Westminster Abbey at least he accomplished an urgent work of repair in an unexceptionable manner. His activities at Salisbury, Durham, Hereford, and Lichfield were bitterly criticized by John Carter in his Pursuits of Architectural Innovation, and it was due in large measure to Carter's persistent denunciation that, in 1796, Wyatt failed to secure election as a Fellow of the Society of Antiquaries. In the following year, however, he was permitted to add F.S.A. to his name by a majority of one hundred and twenty-three votes.

Wyatt was elected to the Royal Academy in 1785, and took an active part in the politics of the Academy. In 1803 he was one of the members of the Council which attempted to assert its independence of the General Assembly of Academicians, and when the resultant dissensions led West to resign the Presidency in the following year, it was Wyatt who was elected to take his place. But his election was never formally approved by the King, and in the following year he appears to have acquiesced in West's resumption of office. Wyatt was one of the founders of the Architects' Club in 1791, and sometimes presided at its meetings at the Thatched House Tavern.

In 1802 Wyatt built a new house for the 7th Earl of Bridgewater on the Ashridge estate in Hertfordshire which is now a Grade I listed building. In 1803 Thomas Johnes hired Wyatt to design Saint Michel's Hafod Church, Eglwys Newydd, in Ceredigion, Wales.

He died on 4 September 1813 as the result of an accident to the carriage in which he was travelling over the Marlborough Downs with his friend and employer, Christopher Codrington of Dodington Park. He was buried in Westminster Abbey; he left a widow and four sons, of whom the eldest, Benjamin Dean, and the youngest, Philip, were notable architects. Matthew Cotes (1777–1862), the second son, became a well-known sculptor, whose best work is the bronze statue of George III in Cockspur Street off Trafalgar Square. Charles, the third son, was for a time in the service of the East India Company at Calcutta, but returned to England in 1801. Nothing is known of his later career.

The best portrait of Wyatt is that in the possession of Messrs. W. & A. Gilbey, Ltd. There is another in the RIBA Library, and a pencil portrait by Dance is in the Library of the Royal Academy. The National Portrait Gallery has a bronze bust of Wyatt by John Charles Felix Rossi. Curiously few original drawings by Wyatt are known to be in existence: but in the RIBA Library there are designs by him for Badger Hall, Fonthill Abbey, Downing College, and Ashridge Park. An album of Wyatt's sketches, in the possession of the Vicomte de Noailles, contains designs for chandeliers, torchères, vases, etc., a plan for Lord Courtown, etc. (C. Life, Dec. 5, 1947, and July 2, 1948). Those for Slane Castle are in the Murray Collection of the National Library of Ireland.

Wyatt's principal draughtsman was Joseph Dixon, who, according to Farington, had been with him from the time of the building of the Pantheon.

He had many pupils, of whom the following is an incomplete list: William Atkinson; W. Blogg; H. Brown; Joseph Dixon (perhaps a son of the draughtsman); John Foster, junior of Liverpool; J. M. Gandy; C. Humfrey; Henry Kitchen; W. Sanderson; R. Smith; Thomas and John Westmacott; M. Wynn; and his sons Benjamin and Philip Wyatt. Michael Gandy and P. J. Gandy-Deering were also in his office for a time.