From Infogalactic: the planetary knowledge core
Jump to: navigation, search
This article is about the racecar pilot. For the football player, see Jamie Green (footballer). For other people, see James Green (disambiguation).

At the age of 10, Green entered BriSCA Ministox and won the British Championship in his first season. He then progressed to karting, finishing runner-up in the Junior TKM series in 1996.

In 1997, he moved up to the Junior ICA Winter Series, in which he won the title, and finished runner-up in the McLaren Mercedes Champions of the Future series. He won the Formula A Winter Series in 2000, then finished runner-up in British Formula A in 2001. He dovetailed the British campaign with the European Formula A championship during 2000 and 2001, in which he achieved two race wins.[1]

In 2003, Green progressed to the British Formula 3 championship with Carlin Motorsport. He again finished in the runner-up position in his first season and won four races. During that year, he made his debut in the Formula Three Euroseries, competing in three rounds (six races) for Team Kolles and one round (two races) for ASM Formule 3.[3]

2004 saw Green enter his first full season in the Euroseries with ASM, having gained backing from Mercedes-Benz. He achieved seven race wins, six poles, and 139 points en route to the championship title.[4] 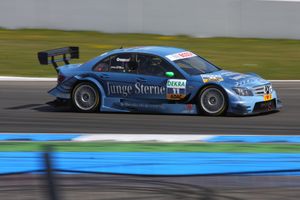 Green finished third at the DTM season-opener at Hockenheim in 2010.

For the 2005 season, Mercedes placed Green in the DTM. He drove one of its customer cars - a 2004 C-class - run by Persson Motorsport, with which he achieved a 6th-place finish on his debut, secured two pole positions and finished 6th overall in the championship standings, with a total of 29 points.

2006 saw him promoted - along with his team-mate from Persson, Bruno Spengler - to the factory Mercedes-AMG line-up, run by H.W.A. GmbH, alongside multiple champion Bernd Schneider and former Formula One driver Mika Häkkinen. He achieved four pole positions and a best finish of 2nd place on two occasions, but no wins. He was classified 5th overall, with a total of 31 points. In 2007, he continued to be part of the factory line-up and reached the top step of the podium for the first time with two race wins in the last two rounds of the season. After the 2008 season, despite two victories he was moved into a one-year-old car to make way for former champion Gary Paffett, but was still able to win round four at the Norisring.

† Driver did not finish, but completed 75% of the race distance.

In 2002, Green won the McLaren Autosport BRDC Young Driver of the Year award, beating five other nominated finalists in a series of on-track trials in touring cars and formula single-seaters.