From Infogalactic: the planetary knowledge core
Jump to: navigation, search
For the mountaineer of the same name, see Jan Długosz (mountaineer). 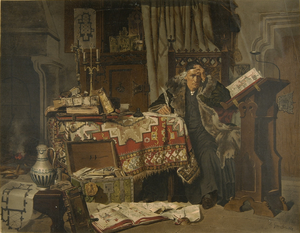 Jan Długosz is best known for his Annales seu cronici incliti regni Poloniae (Annals or Chronicles of the famous Kingdom of Poland), covering events in southeastern Europe, but also in Western Europe, from 965 to 1480, the year he died.[1] His work was first printed in 1701-1703. Whenever he bothers to mention himself in the book, he writes of himself in the third person. He belonged to the Wieniawa coat-of-arms.

Długosz was a canon at Kraków, educated in the University of Krakow. He was sent by King Casimir IV Jagiellon of Poland on diplomatic missions to the Papal and Imperial courts, and was involved in the King's negotiations with the Teutonic Knights during the Thirteen Years' War (1454–66) and at the peace negotiations.

In 1434, Długosz's uncle, the first pastor at Klobuck, appointed him to take over his position as canon of St. Martin church at Klobuck. The town was in the Opole territory of Silesia, but had recently been conquered by Władysław II Jagiełło. Długosz stayed until 1452 and while there, founded the canonical monastery.

In 1450, Długosz was sent by Queen Sophia of Halshany and King Casimir to conduct peace negotiations between John Hunyadi and the Bohemian noble Jan Jiskra of Brandýs, and after six days' of talks convinced them to sign a truce.

In 1455 in Kraków, a fire spread which destroyed much of the city and the castle, but which spared Długosz's house.

In 1461 a Polish delegation which included Długosz met with emissaries of George of Podebrady in Bytom, Silesia. After six days of talks, they concluded an alliance between the two factions. In 1466 Długosz was sent to the legate of Wrocław, in order to attempt to obtain assurance that the legate was not biased in favor of the Teutonic Knights. He was successful, and was in 1467 entrusted with tutoring the king's son.

Długosz declined the offer of the Archbishopric of Prague, but shortly before his death was nominated Archbishop of Lwów. This nomination was only confirmed by Pope Sixtus IV on 2 June 1480,[2] two weeks after his death.

His work Banderia Prutenorum of 1448 is his description of the 1410 Battle of Grunwald, which took place between villages of Grunwald and Stębark.

At some point in his life Dlugosz loosely translated Wigand of Marburg's Chronica nova Prutenica from Middle High German into Latin, however with many mistakes and mixup of names and places.[3]