Janssen was born at Nootdorp, a small town near The Hague and Delft, just five days after the Netherlands surrendered to the Nazis. He later moved to Putte, a village on the Belgian border between Roosendaal and Antwerp. He worked with his parents as a youth, digging the heavy ground of the western Netherlands to excavate foundations for the buildings the family firm erected. He joined the cycling club at Delft when he was 16 and as a novice won 25 races in two years.[1]

Janssen turned professional after an amateur career in which he won several Dutch classics and rode for the Netherlands in the Tour de l'Avenir, which was then open to amateurs and to independents, or semi-professionals. Janssen rode for French teams and is especially associated with Pelforth-BP, sponsored by a brewer and an oil company. His talent, authority, and command of French quickly established him as the team leader. At first he had a reputation as a sprinter[citation needed] but he quickly developed into a rider of multi-day races.

He competed in the individual road race at the 1960 Summer Olympics.[2]

He rode his first Tour de France in 1963, when he won a stage, but a crash forced him to retire. In 1964 he won Paris–Nice, then two stages and the green jersey of points leader in the Tour. Later that year he became world champion at Sallanches, in France. He wore the green jersey again in the Tour of 1965 and in 1966 came close to winning overall. But it was finally in 1968 that he became the first Dutchman to win the Tour de France, beating the Belgian, Herman Van Springel, by 38 seconds. That remained the smallest winning margin until 1989, when Greg LeMond won by only eight seconds ahead of Laurent Fignon. Janssen had not worn the leader's maillot jaune in 1968 until he reached Paris at the end of the final stage, a time-trial.

The Tour in 1968 was, like the previous year, for national teams rather than trade teams. The organisers resolved to "experiment" with national teams in a measure widely interpreted[citation needed] as revenge by the organiser, Félix Lévitan, on sponsors he thought had provoked a strike against drug tests the previous year. Putting into one team riders who the rest of the year rode for rival sponsors proved a problem and internal rivalries were said[citation needed] to divide the Dutch team more than most. Janssen had to overcome these internal problems to win. His victory in the orange jersey of the Netherlands rather than the blue, yellow and white of the Pelforth team made his first win for the Netherlands all the more popular at home.[citation needed] 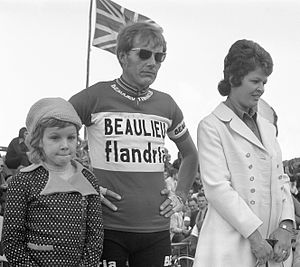 He retired from racing, he says, after being left behind in the Tour of Luxembourg and being ashamed to hear his name listed on the race radio service among other also-rans.[3]

"I knew then that I was Jan Janssen, winner of the Tour de France and the championship of the world and that it was time for me to stop", he says.

He left the peloton to run a bicycle frame-building business in the south-western village of Putte, which is divided by the border with Belgium. That company still bears his name today.[4] His neighbours there included another world champion, Hennie Kuiper. Janssen continued to ride his bike in retirement as a member of the Zuid-West Hoek club. He continues to make personal appearances along with other Dutch riders of his era. He said he enjoyed being recognised while on training rides.[3]

Anybody who tries to do something unpleasant to Jan, may it be in a race or a matter of money, has a very tough opponent. Like most successful bikies, Jan knows the value of money. So much so that he gives the impression that he is our Minister of Finance.[1]

Janssen spent most of his career with a French sponsor, profiting from the higher rate that the French franc enjoyed then against the guilder. But since then things have changed, he said.

We had to be good all the time, from the first of February until the end of October. Because it was my duty to make the most of my sponsor's name, to get publicity. And if you had an off-day, well, you were letting your sponsors down. Now the whole sponsorship of sport has taken off. It has become so interesting to a company, because a company that wants to get its name known, you can buy a good team, with good management, good public relations, and you can get all the big names. I think, too, that the motivation has changed with the professionals as well. You get riders like Steven Rooks and Gert-Jan Theunisse saying that after the Tour they are stopping at home because they can't be bothered with criteriums, and that's not attractive for the public.[5]