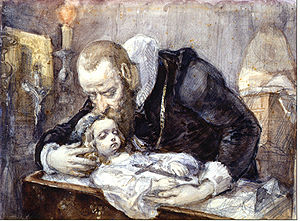 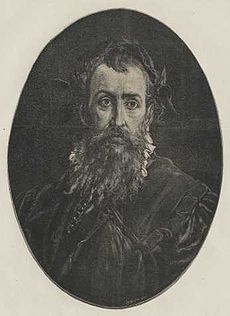 He is commonly regarded as the greatest Polish poet before Adam Mickiewicz,[2][3] and the greatest Slavic poet prior to the 19th century.[4]

Kochanowski was born at Sycyna, near Radom, Poland. Little is known of his early education. At fourteen, fluent in Latin, he was sent to the Kraków Academy. After graduating in 1547 at age seventeen, he attended the University of Königsberg (Królewiec), in Ducal Prussia, and Padua University in Italy. At Padua, Kochanowski came in contact with the great humanist scholar Francesco Robortello. Kochanowski closed his fifteen-year period of studies and travels with a final visit to France, where he met the poet Pierre Ronsard.

In 1559 Kochanowski returned to Poland for good, where he remained active as a humanist and Renaissance poet. He spent the next fifteen years close to the court of King Sigismund II Augustus, serving for a time as royal secretary. In 1574, following the decampment of Poland's recently elected King Henry of Valois (whose candidacy to the Polish throne Kochanowski had supported), Kochanowski settled on a family estate at Czarnolas ("Blackwood") to lead the life of a country squire. In 1575 he married Dorota Podlodowska, with whom he had seven children.

Kochanowski is sometimes referred to in Polish as "Jan z Czarnolasu" ("John of Blackwood"). It was there that he wrote his most memorable works, including The Dismissal of the Greek Envoys and the Laments.

Kochanowski died, probably of a heart attack, in Lublin on 22 August 1584. 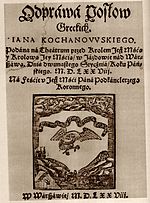 Kochanowski never ceased to write in Latin; however, his main achievement was the creation of Polish-language verse forms that made him a classic for his contemporaries and posterity.

His first major masterpiece was Odprawa posłów greckich (The Dismissal of the Greek Envoys, 1578; recently translated into English by Indiana University's Bill Johnston). This was a blank-verse tragedy that recounted an incident leading up to the Trojan War. It was the first tragedy written in Polish, and its theme of the responsibilities of statesmanship continues to resonate to this day. The play was performed at the wedding of Jan Zamoyski and Krystyna Radziwiłł at Ujazdów Castle in Warsaw on January 12, 1578.[5]

Kochanowski's best-known masterpiece is Treny (Threnodies, 1580). It is a series of nineteen elegies upon the death of his beloved two-and-a-half-year-old daughter Urszula (pet name Urszulka). It has been translated into English (as Laments) in 1920 by Dorothea Prall, and in 1995 by Stanisław Barańczak and Seamus Heaney.

Other well-known poems by Kochanowski are Proporzec albo hołd pruski (The Banner, or the Prussian Homage), the satiric poem Zgoda (Accord) published in 1564, and the merry Fraszki (Epigrams, published 1584), reminiscent of the Decameron. His translation of the Psalms is highly regarded. He also wrote in Latin, examples being Lyricorum libellus (Little Book of Lyrics, 1580), Elegiarum libri quatuor (Four Books of Elegies, 1584), and numerous poems composed for special occasions. He greatly enriched Polish poetry by naturalizing foreign poetic forms, which he knew how to imbue with a national spirit.[2]

His writings were published collectively for the first time at Cracow in 1584–90, but the so-called jubilee publication, which appeared in Warsaw in 1884, is better. Many of his poems were translated into German by H. Nitschmann (1875).[6] 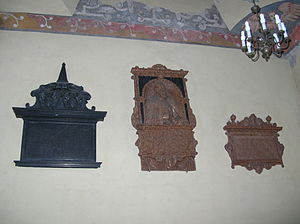 Kochanowski family epitaphs at Zwoleń church. The poet's is at center. 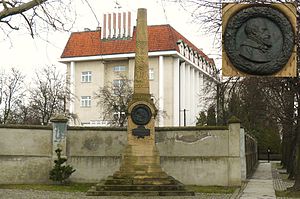