Jan Raas (born 8 November 1952) is a Dutch former professional cyclist whose 115 wins include the 1979 World Road Race Championship in Valkenburg, he also won the Tour of Flanders in 1979 and 1983, Paris–Roubaix in 1982 and Milan–San Remo in 1977. He won ten stages in the Tour de France. In six starts, Raas won the Amstel Gold Race five times.[1]

Raas was a tactician and clever sprinter. He struggled on the long steep climbs but excelled on the short climbs characteristic of the northern classics.

Born in Heinkenszand, near Goes in Zeeland, Raas was the son of a farmer and one of 10 children. He showed no interest in cycling until leaving school at 16 when he acquired his first racing bike and started competing as a junior category, taking his first victory in Damme in Belgium on the 21 July 1969. Further success as an amateur, including stage wins in the Olympia Tour and the national championship, prompted Peter Post, the manager of TI-Raleigh, to offer Raas a contract for 1975

The 22-year-old had a good first season with two small victories and fourth in the Tour of Belgium. The following year (1976) saw him become national champion, but at the end of that year Raas parted company with TI-Raleigh, looking for more freedom to race.[2] 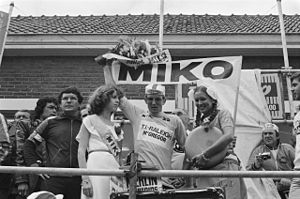 Raas wearing the yellow jersey at the 1978 Tour de France

In 1977 he rode for Frisol. Victories in Milan–San Remo and the Amstel Gold Race made Post rethink and Raas was back with TI-Raleigh for 1978. Raas became the influence behind the success of the team in the late seventies and early eighties. He was joint leader with Gerrie Knetemann, heading members such as Joop Zoetemelk, Ludo Peeters, Cees Priem and Henk Lubberding.

Raas’ highlights for the rest of his career included his 1979 world championship on home soil in Valkenburg, where he outsprinted German "Didi" Thurau in front of 200,000 spectators (even with the help from team-mates that push him during the climb, grabbing service vehicle, and the fall of Giovanni Battaglin caused by Thurau and Raas himself on the last 200m). He had four more victories in the Amstel Gold Race to give a record of five. Raas regarded the Amstel Gold as his favourite race: “The Gold Race was made for me, I had no ability as a climber, but the short and hard Limburg hills were made for me”, he said. He won Paris–Roubaix at his seventh attempt in 1982 thanks to work by his team, especially Peeters.

Raas crashed in the 1984 Milan–San Remo, injuring his back and internal organs and was never the same, although he took a stage in the 1984 Tour de France. He found the training and recovery hard and retired on 28 May 1985 after a criterium at Hansweert the preceding day.

Raas’ know-how made for a natural move into team management and he became sporting director of Kwantum team. Raas found sponsors when old ones pulled out and the team received backing from SuperConfex, Buckler, WordPerfect, Novell and finally Rabobank.

Raas and his wife Anja suffered an armed raid on their house in March 1994[3] and Raas decided he could no longer spend long periods away from home. He changed from sporting director to manager when Rabobank became the main sponsor in 1995. He spent eight years in this capacity until the end of 2003, the sponsor indicating that insoluble differences prompted Raas' departure.[4]