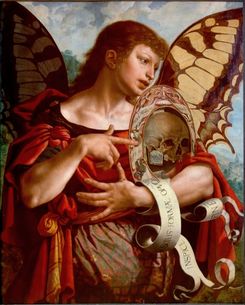 Jan Sanders van Hemessen (c. 1500 – c. 1566) was a Flemish Renaissance painter. He played an important role in the development of genre painting, through his large scenes with religious or worldly subjects, which focused on human failings such as greed and vanity. He also painted portraits.

Jan Sanders van Hemessen was born in Hemiksem, then called Hemessen or Heymissen. He was an apprentice of Hendrick van Cleve I in Antwerp.[1] He traveled to Italy early in his career, around 1520. Here he studied both models from classical antiquity, such as the Laocoön as well as the contemporary works of Michelangelo and Raphael.[2] He returned to Antwerp where he entered the local Guild of Saint Luke as a master in 1524.[3]

Van Hemessen is believed to have worked early in his career at the royal court in Mechelen. Here he may have first encountered Jan Gossaert, a court painter, as well as the Master of the Legend of the Magdalen.[2] Although the early biographer Karel van Mander wrote that van Hemessen spent time in Haarlem, there is no evidence for this statement.

Van Hemessen was one of the earliest Netherlandish artists to exploit the genre character of biblical subjects often for a moralizing purpose.[4] Van Hemessen specialized in scenes of human character flaws such as vanity and greed. His pictures often have a religious subject. His style helped found the Flemish traditions of genre painting.[5]

Van Hemessen was also a portrait painter.[6] His Mannerist style is characterised by muscular and palpably three-dimensional figures, a densely packed foreground of abruptly cropped forms, and vigorous, even flamboyant gestures.[4] Hemessen counterbalanced the influence of Classical and Renaissance models with the realism he must have learned from northern artists such as Quentin Matsys, Joos van Cleve, Marinus van Reymerswaele and possibly even Lucas van Leyden and Hans Holbein the Younger.[3]

Jan Sanders van Hemessen is associated with the development of the tavern scene or merry company in Flemish genre painting. He commenced his compositions on this theme with a 1536 painting on a religious subject, i.e. the Parable of the Prodigal Son (Royal Museums of Fine Arts of Belgium).

The foreground of the composition shows the prodigal son during his days of high living in the company of prostitutes, music, wine and gambling. In the background through the open window one can discern a scene of the prodigal son living among the swine after he has fallen on hard times and the scene of his reunion with his father who forgives him. The composition clearly carries a moral lesson by showing that one needs to see beyond the earthly pleasures depicted in the foreground to find the path of redemption, which is shown in the background.

The Calling of St. Matthew

Jan Sanders van Hemessen painted several compositions on the subject of the Calling of St. Matthew: one version in the Alte Pinakothek, two in the Kunsthistorisches Museum and a workshop version in the Metropolitan Museum of Art. The subject matter provided van Hemessen with another occasion to use a religious subject to convey a moral message. The biblical story goes that St Matthew started out his life as a publican until he was called upon by Jesus and immediately followed him. The story provided van Hemessen with an excuse to paint a scene contrasting people busily engaged in commercial activities, in particular money changing or counting, and the serene Jesus.[8]

The workshop version in the Metropolitan Museum of Art is a close copy of the 1548 version in the Kunsthistorisches Museum, only the background is different. In both version Jesus is shown beckoning to Matthew using a gesture reminiscent of Italian art. In the immediate foreground is Matthew, whose arms and head are depicted in dramatic foreshortening while he turns toward Jesus in response to his call. Two of Matthew's colleagues are not aware of the momentous event taking place and they continue with their work of counting money and recording payments. The figure of Matthew is a concealed portrait of Emperor Charles V, the then ruler of Flanders.[4]

Another representative work of Jan Sanders van Hemessen with a moral message is The Surgeon of 1555 (Museo del Prado, Madrid). The composition represents a scene commonly found in Flemish genre painting. The scene is an urban setting, likely a market. A surgeon is in the process of removing with a knife a stone (believed to be the stone of madness), which is visible inside an incision in the patient's open skull. The madness of the patient was believed to disappear with the removal of the stone.[9] It is implied that the surgeon is actually a quack who has himself placed the stone in the incision by a sleight of hand before pretending to remove it.

As an advertisement for his skills there is behind him a line on which hang stones, which he has supposedly removed from earlier patients.[10] Next to the surgeon stands a man who is gesturing in desperation, as he is clearly the next patient to go under the scalpel. On the left a female assistant is preparing ointment in a bowl. The composition is a denunciation of the greed of the surgeon who abuses his patients' gullibility.[11]

His style of portrait painting played an important role in the popularity of portraiture in northern Europe from circa 1540 onwards. While Michelangelo and Raphael were the principal influences on his religious compositions, his later portraiture owed more to Agnolo Bronzino. At the same time, his portraits include elements from Flemish painting of his time.

An example of his portraits is the Portrait of a Gentleman, Aged 34, before an Extensive Landscape dated between 1530 and the early 1540s (sold at Sotheby's on 9 July 2014 in London, lot 41). It is clearly inspired by Bronzino's portraits from the 1530s, which van Hemessen must have known through prints. The Portrait of a Gentleman shows an arrangement of the hands typical for Bronzino but started by Titian: the right hand is grasping an item representative of the sitter’s interests or identity, while the other hand rests lower down the plane. This arrangement would become standard practice in High Renaissance and Mannerist portraiture. An important element in van Hemessen’s work differs from his Itialian model: the landscape. Beyond the sitter is visible a ‘world landscape’ in the more developed form as it was practised in the Low Countries in the 1530s and reminiscent of the landscapes of Matthys Cock.[2]