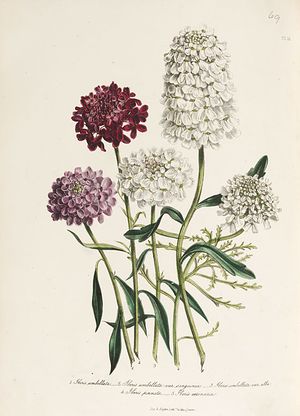 Plate from "The Ladies' Flower-Garden of Ornamental Annuals" (1842)

Jane Wells Webb Loudon (19 August 1807 – 13 July 1858) was an English author and early pioneer of science fiction. She wrote before the term was invented, and was discussed for a century as if she wrote Gothic fiction, or fantasy or horror. She also created the first popular gardening manuals, as opposed to specialist horticultural works, and contributed to the work of her husband, John Claudius Loudon.[1]

Jane Webb was born in 1807 to Thomas Webb, Esq., a wealthy manufacturer from Edgbaston, Birmingham and his wife. (Sources vary on her place of birth: according to the Oxford Dictionary of National Biography (ODNB), she was born at Ritwell House—possibly the same as Kitwell House at Bartley Green.) After the death of her mother in 1819, she travelled Europe for a year with her father, learning several languages. On their return his business faltered, and as a consequence of over speculation, his fortune was lost. He sold the house in Edgbaston and they moved to another of his properties, Kitwell House at Bartley Green, 6 miles away. He died penniless in 1824, when Jane Webb was only 17.[1][2][3]

After her father's death, she found that

"on the winding up of his affairs that it would be necessary to do something for my support. I had written a strange, wild novel, called the Mummy, in which I had laid the scene in the twenty-second century, and attempted to predict the state of improvement to which this country might possibly arrive."[4]

She may have drawn inspiration from the general fashion for anything Pharaonic, inspired by the French researches during the Napoleonic invasion of Egypt; the 1821 public unwrappings of Egyptian mummies in a theatre near Piccadilly, which she may have attended as a girl; and, very likely, the 1818 novel by Mary Shelley, Frankenstein.[2] As Shelley had written of Frankenstein's creation, "A mummy again endued with animation could not be so hideous as that wretch," which may have triggered young Miss Webb's later concept. In any case, at many points she deals in greater clarity with elements from the earlier book: the loathing for the much-desired object, the immediate arrest for crime and attempt to lie one's way out of it, etc.[2] However, unlike the Frankenstein monster, the hideous revived Cheops is not shuffling around dealing out horror and death, but giving canny advice on politics and life to those who befriend him.[2] In some ways The Mummy! may be seen as her reaction to themes in Frankenstein: her mummy specifically says he is allowed life only by divine favour, rather than being indisputably vivified only by mortal science, and so on, as Hopkins' 2003 essay covers in detail.[2]

Unlike many early science fiction works (Shelley's The Last Man, and The Reign of King George VI, 1900-1925, written anonymously in 1763[5][6]), Loudon did not portray the future as her own day with only political changes. She filled her world with foreseeable changes in technology, society, and even fashion. Her court ladies wear trousers and hair ornaments of controlled flame. Surgeons and lawyers may be steam-powered automatons. A kind of Internet is predicted in it. Besides trying to account for the revivification of the mummy in scientific terms—galvanic shock rather than incantations--"she embodied ideas of scientific progress and discovery, that now read like prophecies"[7] to those later down the 1800s. Her social attitudes have resulted in this book being ranked among feminist novels.

The Mummy!: Or a Tale of the Twenty-Second Century was published anonymously in 1827 by Henry Colburn in three volumes, as was usual in that day so that each small volume could be easily carried around. It drew many favourable reviews, including one in 1829 in The Gardener's Magazine on the inventions proposed in it. 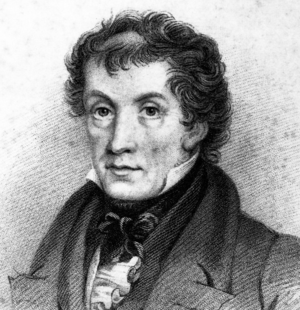 "Among other foreshadowings of things that were to be, was a steam plough, and this attracted the attention of Mr. John C. Loudon, whose numerous and valuable works on gardening, agriculture, etc., are so well known, led to an acquaintance, which terminated in a matrimonial connection."[7]

John Loudon wrote a favourable review of The Mummy in a journal he edited. Seeking out the author of the text, presuming that person to be male, he eventually met Jane in 1830, and they married a year later.[9]

In 1829, Loudon published the semi-fictional Stories of a Bride, her second and last foray in fiction.

She became fascinated with her husband's field of agriculture and gardening. She found the gardening manuals of the day confusing as they were written for those already deeply into the field via some apprenticeship: there were no entry-level manuals. She saw the need for and potential interest in such books, and set to writing them as she herself learned: Instructions in Gardening for Ladies; The Ladies' Flower Garden; The Ladies' Companion to the Flower Garden; Botany for Ladies; The Lady's Magazine of Gardening, etc. According to Adams, these became "standard books of reference, and attained a large circulation."[citation needed] She was not only influenced by her husband in gardening, but by John Lindley, whose lectures she attended; she ardently seconded his concepts of gardening as an occupation very fit for ladies.

She learned to plant and tend in the meticulous manner her husband needed for his researches and was his helper, if not co-author, on his books hereafter.[citation needed]

In 1832, they had a daughter, Agnes Loudon. She became an author of children's books.

The Loudons were considered the leading horticulturalists of their day, and their circle of friends included Charles Dickens and William Makepeace Thackery.

In 1843, John Loudon died of lung cancer, leaving Jane with a 10-year-old daughter, Agnes. In addition to earning her living by writing, Loudon received "a pension of a hundred pounds per annum, from the Civil List, which she has deservedly gained."[7]

In late 1849, Loudon was editing The Ladies’ Companion at Home and Abroad, a new magazine for women. Although highly successful in the beginning, book sales decline and she resigned as editor. Loudon died in 1858 at fifty-one years of age.[citation needed]