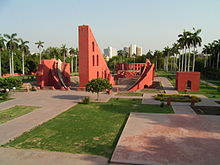 The Jantar Mantar is an equinoctial sundial, consisting a gigantic triangular gnomon with the hypotenuse parallel to the Earth's axis. On either side of the gnomon is a quadrant of a circle, parallel to the plane of the equator. The instrument is intended to measure the time of day, correct to half a second and declination of the Sun and the other heavenly bodies.

There are five Jantar Mantar monuments in India, of which the largest is in Jaipur which features many instruments along with the world's largest stone sundial.[1] The Vrihat Samrat yantra is a sundial that can give the local time to an accuracy of 2 seconds.[2]

In the early 18th century, Maharaja Jai Singh II of Jaipur constructed five Jantar Mantars in total, in New Delhi, Jaipur, Ujjain, Mathura and Varanasi; they were completed between 1724 and 1735.

The jantars have evocative names like Samrat Yantra, Jai Prakash, Ram Yantra and Niyati Chakra; each of which are used to for various astronomical calculations. The primary purpose of the observatory was to compile astronomical tables, and to predict the times and movements of the sun, moon and planets.[3] 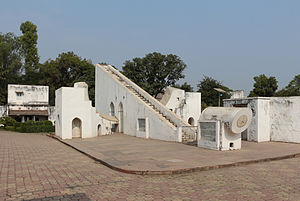 The Sun Dial at the Vedh Shala in Ujjain 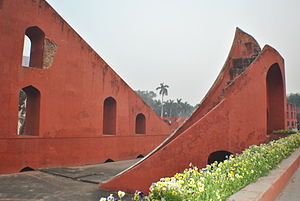 The name "Jantar Mantar" is at least 200 years old, finding a mention in an account from 1803.[4] However, the archives of Jaipur State, such as accounts from 1735 and 1737–1738, do not use this name, referring to it simply as Jantra, which in the spoken language is corrupted to Jantar.[4] The word Jantra is derived from yantra, instrument, while the suffix Mantar is derived from mantrana meaning consult or calculate.[4] The words jantar and 'mantar (or yantra and mantra) means calculation instrument.